s mentioned in last Tuesday's Card of the Day on Jackal Pup, sometimes illustrations come in that simply don't fit the intended card. When that happens, it's often the card that has to give way. Though these kinds of problems are pretty rare now, there are several well-known cases from earlier in Magic's history. For those that might have missed them, here are three of the most famous in one place for your viewing pleasure from Mirage block, in honor of Visions recently joining the Magic Online family.

The original version of Sunweb didn't care about how big the creatures were, it just couldn't block white creatures! Unfortunately for that concept, the illustration came back with the web-like wall blocking a creature you'd be pretty hard pressed to call non-white. Weighing their alternatives, R&D instead went with "can't block small creatures" since the blocked creature in the art was clearly a dragon or similar fatty. 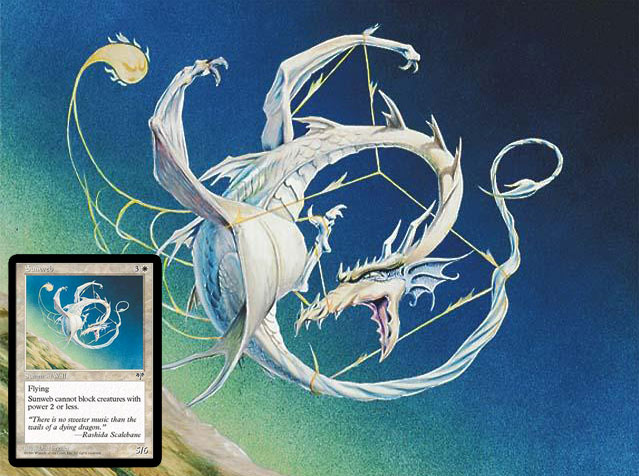 This card was actually supposed to be called "Dwarven Scouts" and made 1/2 dwarf tokens with mountainwalk. The art description called for "three dwarves sneaking through enemy territory." When Mark Rosewater got the illustration, he thought the characters looked too much like goblins, not dwarves. Changing the art turned out to be more difficult than changing the card, so the scouts became goblins instead, and lost a point of toughness each in the process! 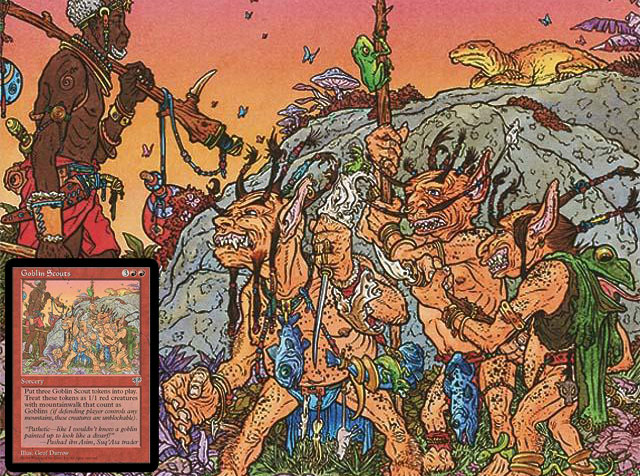 Waiting in the Weeds

Originally called Unseen Wildlife, the art description for this one began thusly, with bolding added by Bill Rose (who was the lead for both design and development on Mirage):

"Dozens of small hungry critters scurry in the low undergrowth of the jungle. In this picture, we cannot tell what the critters are. We can only see the eyes."

Up to this point, the intention had been for the card to introduce squirrel tokens! Unfortunately, the illustration came back and the woodland creatures were clearly not squirrels, so the tokens from Waiting in the Weeds had to become cats instead. 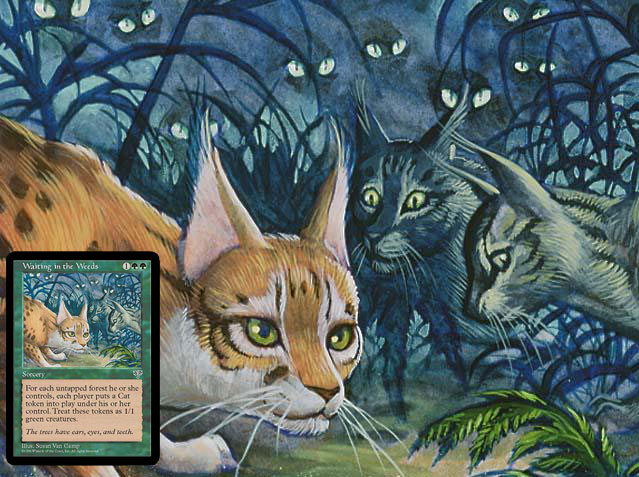