t's time to brag a little. You've heard, no doubt, of the Guinness Book of World Records? Here's a couple of pages from the edition that's coming out now. 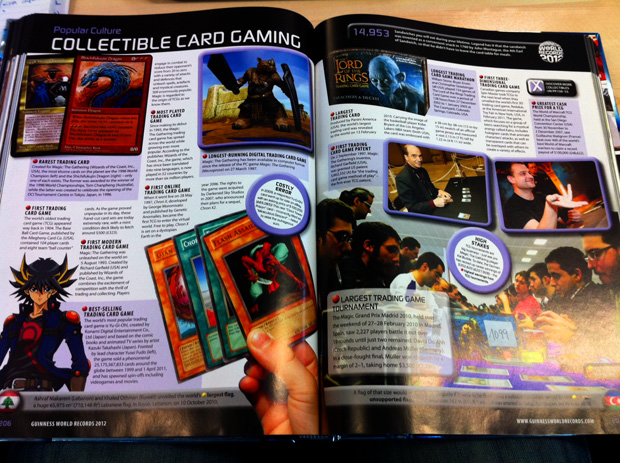 Up in the upper left there, there's a category called "Rarest Trading Card." That's tied between Shichifukujin Dragon and 1996 World Champion, each of which has only one copy in existence. Slightly below that is "First Modern Trading Card Game," which is held by Magic: The Gathering. Moving to the right and a bit up, Magic also holds the title of "Most Played Trading Card Game." And in the upper right, guess what the "Longest-Running Digital Trading Card Game" is!

Moving to the second page, you can see Richard Garfield next to "First Trading Card Game Patent." That's US patent 5,662,332 (A), if you're curious. And then the bottom of the page is taken up by the "Largest Trading Game Tournament," which is held by the 2,227-person Grand Prix Madrid. Finally, the circle labelled "High Stakes" reports that the record for "Highest Earnings from TCG Tournaments" is held by Kai Budde and his career winnings of $354,620.