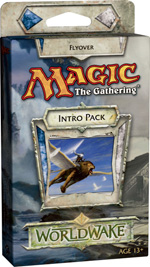 The "Flyover" deck puts you in command of a squadron of flying creatures. Halt your opponents' ground assaults and let loose a reign of terror from the air!

Your evasive creatures will do most of your dirty work. Stormfront Pegasus, Lightkeeper of Emeria, and Voyager Drake all laugh as they fly over grounded creatures to damage your opponents. Apex Hawks and Enclave Elite are also difficult to block, and their multikicker ability means their size is limited only by how much mana you have available when you cast them. The deck's flying forces are led by Archon of Redemption, which lets you gain life equal to the power of any flying creature (including itself) when that creature enters the battlefield.

Marshal's Anthem supports your attack by both making your creatures larger and returning fallen creatures to the battlefield for a second tour of duty.

The rest of your cards protect you so your aerial assault can succeed. Guardian Zendikon creates a mammoth obstacle out of a land, and Gomazoa can return any creature it blocks to its owner's library, where it can no longer harm you. If your opponent casts creatures large enough to get past your defenses, Pacifism and Iona's Judgment can keep you from harm. If your opponent still manages to mount an off ense, Righteousness and Divine Verdict come out of nowhere to destroy the creatures that attack you. After all this, if your opponent still threatens you, Sleep and Unsummon can buy a little more time for your flying creatures to finish the job.

The Worldwake set contains more cards that help the "Flyover" deck. Wind Zendikon turns a land into yet another flying creature for your aerial army. Sejiri Merfolk is a blue creature that gets more powerful if you control a Plains, which you almost always will. Jace, the Mind Sculptor is a planeswalker with mind-altering powers whom you can call to your side. He grinds away your opponent's library and eventually exiles it entirely, making your victory certain.

1 Æther Tradewinds 1 Mysteries of the Deep 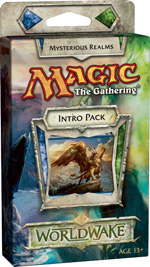 With the "Mysterious Realms" deck, you'll unleash fearsome creatures summoned from the wilds of Zendikar upon your hapless enemies.

Many of your creatures are hungry for space to roam. Thanks to their landfall abilities, they get bonuses every time a land enters the battlefield under your control. Hedron Rover, Territorial Baloth, and Baloth Woodcrasher all get larger when a land enters the battlefield. Many of your cards help you find more lands so you can earn those bonuses regularly. Merfolk Wayfinder retrieves lands from your library. Walking Atlas puts a land directly onto the battlefield—even on an opponent's turn. And Frontier Guide can do both! When a land enchanted by Wind Zendikon is put into the graveyard, the land card then returns to your hand. Play it again and trigger landfall abilities one more time.

Your spells let you control the battlefield. Æther Tradewinds returns two permanents—one you control and one you don't—to their owners' hands. Vapor Snare lets you gain control of an opposing creature. As a bonus, both of those cards can return lands to your hand so you can consistently trigger your landfall abilities. Paralyzing Grasp prevents a threatening creature from untapping. Mysteries of the Deep, Treasure Hunt, and Seer's Sundial all give you more cards with which to overwhelm your opponent. If nothing else works, of course, you can secure victory with an enormous Goliath Sphinx.

Many other Magic cards can enhance the "Mysterious Realms" deck. In the Worldwake expansion, you'll find Explore, a sorcery that lets you draw a card and play an extra land, potentially triggering your landfall creatures twice in one turn. You'll also find Avenger of Zendikar, an Elemental that creates 0/1 Plant creature tokens when it enters the battlefield. Every land that enters the battlefield under your control after that makes the Plants larger!

1 Zombie Goliath 1 Anowon, the Ruin Sage 1 Rise from the Grave 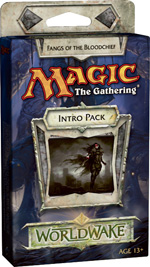 The "Fangs of the Bloodchief " deck puts you in control of Zendikar's most insidious predators—Vampires. With their assistance, you'll drain the life right out of your enemies.

Start with foot soldiers like Pulse Tracker, Ruthless Cullblade, and Child of Night, and use Vampire Aristocrat and Vampire Nighthawk to continue your assault. Of course, your army would be incomplete without leaders. Anowon, the Ruin Sage forces each player to sacrifice a non-Vampire creature on each of your turns, and Butcher of Malakir makes your opponent sacrifice a creature every time a creature goes to your graveyard from the battlefield for any reason. Either Vampire is devastating alone, but together they can truly decimate an opponent's forces.

Many of your spells can help clear the path between your Vampires and your opponent. Urge to Feed, Feast of Blood, and Hideous End all remove your opponent's creatures, and Dead Reckoning not only takes out an opposing creature, but also allows one of your Vampires a second opportunity to wreak havoc. Use Mire's Toll to relieve your opponents of any spells that they could use to stop your assault. If your Vampires still can't get the job done, use Rise from the Grave to reanimate the best creature card in a graveyard, or just go for the enemy's throat with a lethal Consume Spirit.

Many other cards in the Worldwake expansion can improve the "Fangs of the Bloodchief" deck. For example, Quag Vampires has a multikicker ability that allows you to make it larger the more mana you spend when casting it. Smother is an instant that destroys an early threat without allowing regeneration. Finally, Vampire Nocturnus from the Magic 2010 core set gives all of your Vampires +2/+1 and flying as long as the top card of your library is black. 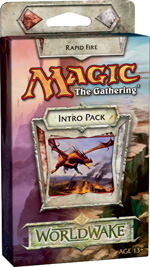 With the "Rapid Fire" deck, you'll crush the opposition under a sudden avalanche of creatures. By the time they know what hit them, they'll already be buried!

Many of your creatures have landfall abilities that trigger when your lands enter the battlefield. Fledgling Griffin and Geyser Glider both gain flying, Steppe Lynx grows in size, and Cosi's Ravager damages your opponent. Kor Cartographer and Pilgrim's Eye help those landfall creatures by finding you more lands. Use your creatures to unleash an early assault on your opponent. If your attack stalls, you can use all the lands you've accumulated to summon Mordant Dragon, who can devastate your opponent's life total and creatures with a successful attack.

Use your spells to keep the pressure on your opponent. Searing Blaze deals damage to both your opponent and a creature, while Magma Rift removes all but the largest creatures your opponent might have. If your opponent casts a single creature that is too large for you to handle, use Act of Treason to turn it to your side. Armored Ascension enlarges one of your creatures and vaults it over the opposing defense.

Look for other Magic cards to enhance the "Rapid Fire" deck. The Zendikar expansion's Plated Geopede is another small creature with a landfall trigger to support your early assault. In the Worldwake expansion, you'll find Kazuul, Tyrant of the Cliffs, a brutal Ogre who punishes your opponents for attacking you by giving you 3/3 Ogre creature tokens unless they pay 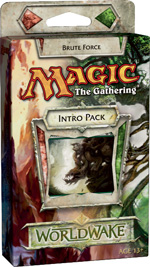 The "Brute Force" deck gives you the reins of Zendikar's largest monsters. Use them to stomp the competition into the ground!

Leatherback Baloth is one of the largest creatures ever for its cost. Vastwood Zendikon turns a land into a 6/4 Elemental creature. Gnarlid Pack and Skitter of Lizards have multikicker abilities that make them as large as you can afford. Your forces will be too large for most creatures to block—if they want tosurvive! Wolfbriar Elemental also has multikicker, but rather than get larger, it brings along 2/2 Wolf creature tokens. Terastodon is another creature that will increase your army's numbers. It's huge at 9/9, and it converts any three noncreature permanents into 3/3 Elephants. If you feed it three of your lands, you'll get a combined 18 power for just

Your spells support your creatures. Giant Growth makes them unexpectedly larger, and Canopy Cover prevents your opponent from targeting them with spells. If opposing creatures are giving you trouble, cast Lightning Bolt to destroy them or Act of Treason to borrow their services for a turn. Your ultimate trump card is Overrun. It lets you deal devastating damage to your opponent, especially if your army is full of token creatures from Wolfbriar Elemental or Terastodon!

Improvements to the "Brute Force" deck can be found throughout the Worldwake expansion. Summit Apes is a 5/2 creature that must be blocked by at least two creatures if you control a Mountain, which you almost always will. Arbor Elf 's ability to untap your Forests gives you the mana you need to fuel enormous multikicker spells very quickly. Possibly the most impressive is Comet Storm, a red instant that deals as much damage as you want to as many diff erent things as you want. The only limitation is how much mana you have!