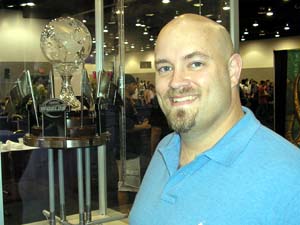 Magic's first World Champion Zak Dolan, stopping by to watch the finals of this year's US Nationals

or this week’s feature article, Managing Producer Monty Ashley put together a great stroll back in time to Magic’s first World Championships, including articles about the event as well as several recounts of the actual play-by-play from the final match between Zak Doland and Bertrand Lestreé. After publishing that article on Monday, I got the following email from Magic’s first World Champion:

Attached is something I wrote about 7 or 8 years ago but never published, a commentary on the play-by-play of the first M:TG World Championships. I've added a short intro and conclusion, but otherwise it's what I wrote when the memories were still fresh in my mind…

Included was a great tournament report from the event, as well as a separate article analyzing the two finalist decks. In addition to some great storytelling leading up to the final event, Zak also covers the same play-by-play we had in the other articles, but this one also includes what he was thinking about as each of the turns unfolded. It’s a great report even with all the nostalgia aside, so I hope you enjoy reading this “bonus” feature article as much as I did. Thanks for sending this one in Zak!