This Article is Every Creature Type at All Times

is not running out for Lorwyn.

There is no ultimate struggle for survival there, and Lorwyn's very existence does not hang in the balance.

Actually, it's a pretty nice place to be. No countdown to disaster. No supervillain secretly pulling the strings. No sadistic killer leaving a trail of bodies in his wake. No gruesome monsters lurking—

—well, the plane does have its mysteries and secrets. There are, I admit, deep truths about Lorwyn that have yet to surface. But the point is that these secrets are not going to destroy the plane in a cataclysm of evil. As I've mentioned earlier, Lorwyn is a purposeful departure from the strife and multiverse-threatening plotlines of the Time Spiral block and others. The tone is lighter and the scale is smaller.

Which brings us to changelings.

It was late in set design, and Lorwyn needed a race of shapeshifters.

One of the design goals of the Lorwyn set was that it feel even more tribal than any set before it, that tribal interactions should fire off all over the place and make tribal feel like the main thing you had to pay attention to. One powerful way to meet that goal is to fill the set with creatures that count as more than one type. Onslaught did this, for example—it had creatures that were both Grassland Crusader, or both Spined Basher, at the same time, allowing those creatures to be in either tribal deck and to activate either kind of whatever tribal combo you were trying to pull off.

With the eight main races in place (Kithkin, Merfolk, Goblins, Elementals, Elves, Faeries, Giants, and Treefolk), it didn't make sense to us on the creative team for there to be cards that had more than one of those types. The two-race trick just wasn't going to cut it here. Tons of work had already been done to define the look of the eight races, and we liked how they expressed Lorwyn's feeling of a storybook world inspired by European folklore. There were no classic faerie tales about Treefolk Goblins or Merfolk Elves—a lot of the combinations didn't make any kind of sense. (Hi, Gaea's Skyfolk! What exactly was up with your parents? I know, I know, Apocalypse was a crazy time. Coalitions came together, people hooked up, strange bedfellows—I get it. But I've been meaning to ask you—you're an Elf and a Merfolk. Why can you fly?)

Even if we had been willing to do a few oddball Faerie Elves or whatnot, it was clear from development that there would need to be a lot of creatures with multiple creature types for it to be relevant to gameplay.

Note that I was part of the Lorwyn development team. So I was kind of divided mind about this issue—the development needs of the set on the one hand, and Creative's goals on the other. My internal dialogue went sort of like this.

In Onslaught Block, the mistform creatures aided tribal play even more flexibly than creatures with two or more tribal-relevant creature types. If you needed to Voice of the Woods or Cabal Archon, you could use a Mistform creature to pull off the trick. It was looking like the set needed some creatures like the Mistforms—but across all five colors.

In the creative team, we knew this problem was not going to be solved by a few strange race hybrids. When it came down to it, we needed a whole new race, something that would do the job similar to the Mistforms. What would they be like?

Design and development were beginning to hammer out what these creatures would be like. One of the first attempts at defining them was an ability that would cause the creature to take on all the creature types of the other creatures in play. That sounded like a shapeshifter.

But that brought up what I'm calling the Shapeshifter Problem.

The Shapeshifter Problem isn't a problem with shapeshifters themselves, or shapeshifters in Magic. Magic loves shapeshifters—the game is riddled with examples of them, both with and without the Shapeshifter type. Transforming from one form to another is a time-honored fantasy trope—in fact, personal transformation is a fundamental part of the concept of magic (little "m") itself. A magician changes his lovely assistant into a tiger. The full moon changes a mild-mannered villager into a slavering werewolf. A kiss changes a frog into a prince. All of these transformations are typical of what we think of as magic, and all are perfectly at home in Magic. In essence, they're all examples of shapeshifters doing their thing.

But in a story, shapeshifting is a particularly powerful literary device. Whenever you introduce the capability of a character to change forms, the range of possible actions for that character deepens dramatically. If you're building a story about a pleasant little world, and you add in some problems to get in the way of your protagonist, and then you introduce the ability of some characters to shapeshift, suddenly every problem in your story looks like a job for shapeshifting. Shapeshifting becomes the skeleton key—the whole story becomes about it. Either the protagonist can shapeshift, and he cleverly uses the ability to fool the bad guys and overcome his problems, or the bad guy can shapeshift, and he uses it to fool the protagonist and generate the conflict. This is what I'm calling the Shapeshifter Problem—introduce shapeshifting ability into your setting, and your setting tends to become all about shapeshifting.

And we didn't want the Lorwyn setting to be all about shapeshifters.

Remember, Lorwyn is an idyllic, storybook setting. There's no House Dimir here, deviously sending assassins to wax VIPs and assume their forms using doppelganger magic. There are no body snatchers that secretly turn your loved ones into evil clones, no Great Ancient Evil that is behind the scenes puppeteering everything. We worried that introducing a race of shapeshifters to Lorwyn would turn the setting's lighthearted feel way too dark, and spoil the tone we were going for. Tales of Lorwyn should be rustic fables, not supernatural thrillers about identity theft.

So how do you make a shapeshifter that doesn't take over the setting? You make it an obvious—and obviously not devious—shapeshifter.

As a shot at a solution, Magic art director (and, once upon a time, Magic concept illustrator) Jeremy Jarvis drew this: 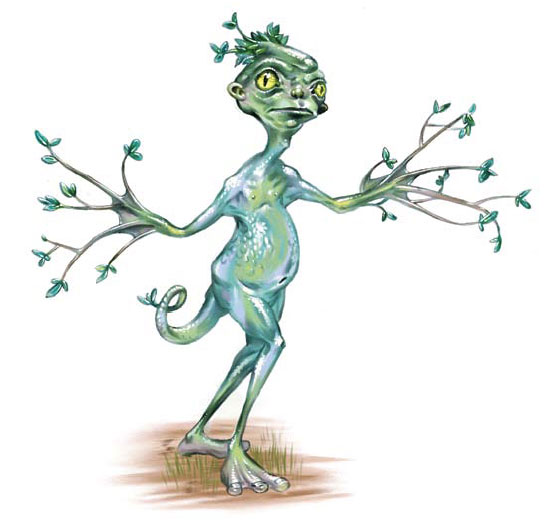 The changeling was born.

In folklore, fairies sometimes steal human children away from their families, leaving behind a fairy child in its place (somewhat like a mother cuckoo laying her eggs in another bird's nest). The fairy child left in the human child's place is called a changeling. In the stories, this is definitely not a trade-up—this is not like the Kents inheriting a lawful good alien from Krypton. The changeling usually grows up to be ugly and badly tempered, and the family is heartbroken over the loss of their true and beloved child.

Our use of the word "changeling" is different—it is closer to meaning "creature that constantly changes" rather than "creature that was exchanged." But we liked how "changeling" already appeared in the same source material we were consulting for the rest of Lorwyn's world-building (the legends and myths of the British Isles).

Lorwyn changelings do not substitute themselves for the children of other races, but a faerie or boggart might pull such a prank on an unsuspecting kithkin mother at times.

The changelings of Lorwyn are a race of semi-intelligent humanoids who involuntarily change their shape into that of the creatures around them. They have childlike expressions and translucent, blue-green bodies. Their magical bodies transform reflexively, like the skin of chameleons or octopuses.

Changelings are skilled at mimicry, but they're far from devious or deceptive. Changelings are obvious. No matter what shape a changeling takes, it always has its characteristic opalescent sheen and its translucent "Gummi Bear" look to it. They can't use their transformation abilities to their own advantage, because they automatically adapt to whatever forms are near them. You never look at a creature in Lorwyn and wonder, "Is that really a shapeshifter in disguise?" because you can always tell.

Changelings have no culture per se. They don't have technology or art. When they speak, it's incoherent parroting. They are creatures of high magic, but they don't have the intellectual wherewithal to forge an agenda as a race.

Changelings can be found all over Lorwyn, in every kind of terrain. They have no proper homeland, but they are associated with a mysterious cavern called Velis Vel, which the card Shimmering Grotto represents. Here's an excerpt from the Lorwyn style guide about it:

There are no notable changeling individuals; they are indistinguishable from each other by anyone other than themselves. The only notable changeling place is Velis Vel Grotto, a place known only to a few merrows. The Grotto is a subterranean cavern through which an underwater stream flows. The cavern's walls are encrusted with quartz crystal. Once a year Lorwyn's sun shines down through a small hole at the top of the Grotto, and it lights up like a disco ball. Changelings are biologically drawn to the Grotto at this time, like salmon swimming upstream to their spawning beds. It's the time of year during which most changelings are created. When the sun passes over the hole and Velis Vel goes dim, the changelings disperse.

As Lorwyn design and development continued, the most logical way to word the changeling ability (as it came to be called) was to match Mistform Ultimus. This change had a flavor impact—the flavor of changelings as mimics of everything near them no longer matched the mechanics precisely. We thought about trying to match the mechanic more closely; we could have let changelings be crazed amalgams that have parts of all creature types all the time. But we already had greater elementals in this setting looking like surreal fusions of animal elements, and trying to cram everything into the look of one creature would have—well, sucked. The visual result would have been very unsatisfying. Besides, the art can only show a freeze-frame—even a second of animation is unrepresentable on a card. The temptation was to think of changelings as a roiling mass of constantly-changing shapes, but you just can't show "roiling"—especially in thirteen different ways across the set. So Jeremy's changeling design, with slight elements of the creature it was representing but a consistent changeling look, was the solution we adopted. 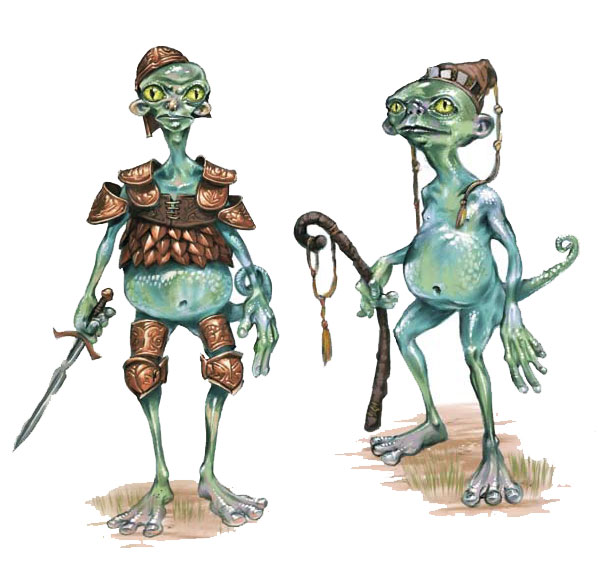 The changelings were a late addition to Lorwyn's creative landscape, but I think they worked out in the end. They are lovable, vapid little creatures, and the card art that depicts them lends them a lot of charm. Changelings represent a lot of Lorwyn's creative goals wrapped up in one blue-green little package—they are engaging without being threatening, important and uniquely magical without casting a sinister shadow on the storyline, and expressive of a sense of childlike wonder without contradicting their card function (which, for any creature in Magic, is mostly about fighting).

Changelings may not be one of Lorwyn's deep mysteries, but they were a creative puzzle to figure out.