must admit I struggled to find a topic to focus on during this Onslaught Week article. When I thought back to what flavors tickled my palate I could not really think of what Onslaught's "thing" was. In fact, I found myself getting Onslaught and Odyssey confused. This should not be all that surprising, since they're both big sets that start with the letter "O" and take place on the continent of Otaria. Still, for me, neither set really stands out from the other, or from all other Magic sets for that matter. Looking back at these two sets makes me feel really good about where Magic has gone since then. Each block since Onslaught has had a very distinct message that is delivered in name, packaging, cards, and storyline. Mirrodin—Artifacts. Kamigawa—Japanese history and folklore. Ravnica—City world. Time Spiral—Temporal chaos. Even little Coldsnap hitched its reins to an older set with a distinct, frozen dessert-like flavor.

But this is Onslaught Week, and so I will dig a little deeper to find some tasty morsels. If the big picture does not provide us with a feast, let's zoom in and look for bite-sized pieces. One step closer we see that Onslaught was the first "tribal" block—with sets that focus on a few choice races and classes. Beast, Elf, Bird, Wizard, Cleric, Zombie, Goblin, and Soldier (with Illusions sprinkled in as a catch-all.)

Mark Rosewater's Monday article makes it clear that Onslaught will not be the last tribal block to don the booster wrap. So perhaps this is a fine opportunity to focus on Onslaught's tribes before another bunch of tribes come along and steal the stage.

I thought it would be fun to search some of the Onslaught tribes for flavor home runs. I figure this is a great time to try and identify some home runs that are real, and not a product of performance-enhancing drugs. While I have seen some Magic artists who have packed on 20 to 30 pounds in short periods of time, and a couple of flavor text writers with bloated heads (not to mention the fact that Mark Rosewater is huge and ripped), I would chalk these up as the product of Funyuns and/or genetic quirks. No, I would think that all the flavor goodness that we find on Magic cards is wholly natural and not the product of any banned substance. (Although all the artists using the computer should probably be considered cheaters. Hey, wait a minute...)

Let's start with the big bruisers that should surely be able to muscle the ball up and over the wall. Ah, but this is a tricky game. As it turns out, Beasts seem to have the highest wall to clear. Even when Onslaught was the current set, flavorphiles seemed to grumble a bit at the "blah"ness of Beasts. They have no society, no roles, no real communication, and therefore very little flavor to differentiate them from each other. In order to be considered a flavor home run, a particular Beast is going to have to rake like a... well, beast. 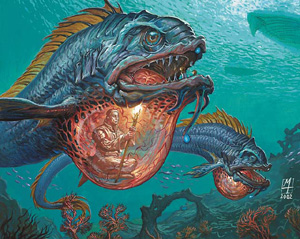 I started out my search for big boppers by looking at the art (no big surprise there, I am sure.) There are definitely some nice pieces; Slipstream Eel, Spined Basher, Spurred Wolverine, Shaleskin Bruiser, Krosan Colossus. I particularly like how Slipstream Eel really sets the whole scene, with great use of lighting and a real sense of being underwater. Spurred Wolverine also provides a little extra spice with the spur-enhanced goblin behind the beast itself. The other three each offer a little bit of flavor connection between their art and the flavor of the rest of the card. Spined Basher is shown emerging from the morph shell, Shaleskin Bruiser really has the look of a stone-like skin, and Krosan Colossus definitely has the look of the biggest Beast in the set.

I immediately call the Slipstream Eel out on strikes. The card really doesn't seem to have anything to do with a dude riding around in an airsac under the fish-beast's belly. I wonder if this card had a different mechanic early on in the design process. Anyway, it's back to the dugout for the eel. 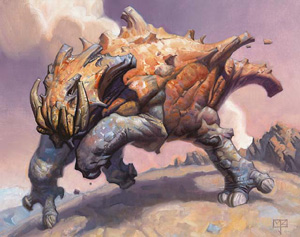 Now let's look at names. They all seem to be fine card names—no sparkling gems, but no dogs either. But this is not about being okay, it's about being really good. Given that, I feel like booting Spined Basher and Shaleskin Bruiser. Neither one really tells me anything about the creature in particular. "Shaleskin" tells me about the art, but not about the flavor text or the card mechanic. "Spined" pulls the same trick. These cards may be solid singles, but no homers, not while I'm pitching.

That leaves us with Krosan Colossus and Spurred Wolverine. Each one has a name and art that reflects the nature of the card. Colossus is freakin' huge, and the Wolverine gives his buddies first strike in the form of red spurs like he has on his back. That just leaves flavor text as the last bit of muscle needed to give these guys the homer. 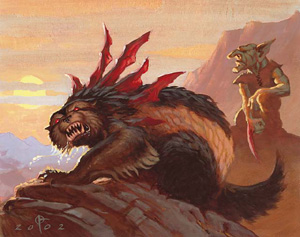 Spurred Wolverine
After a few painful experiences, goblins learned not to pick their noses around the beasts.

Krosan Colossus
When it walked, it altered geography. When it bellowed, it changed the weather.

Hmmm... the first one is sort of funny. Corny, but still funny. Cornbread tastes good. Perhaps we can, in small amounts, appreciate this sort of cornball humor. Had it said "After a few painful experiences, goblins learned not to pick their noses." I would have called it out immediately. We all know that nothing, nothing can keep goblins from picking their noses. As it is, I think Spurred Wolverine might just creep over the wall, a wind-aided pull-job that fellow players secretly know was a lucky shot.

The Colossus, however, gives us a pretty cool piece of flavor text that really hammers home how unbelievable huge it is. Each footprint a ravine, each belch a windstorm. I think the Colossus hits a solid shot into the seats folks. Touch 'em all, big boy.

This race surprised me a little. I thought for sure there would be a whole slew of pointy-eared players, but lo, there is just one. Again, I used the art as the first base to clear and I found only one piece that really struck me as a heavy hitter. Elvish Pathcutter is a dandy painting. (Talk about great hitters; Todd Lockwood rarely misses.)

This is a wonderful painting, and one bad-ass elf. But does it cooperate with the rest of the card? If anything, this guy might look too mighty for the little 1/2 Woodland Scout, but I will not penalize it for looking buff. The art does not exactly show us "pathcutting" (giving forestwalk), but the elf is shown in the forest with a machete-like weapon. I think the art is definitely safe on first. The name, obviously, works with the mechanic and adds a nice little bit of aggression to the art of woodland pathfinding. Art, name, and mechanic all go 'round the horn nicely together. All we need is a solid piece of flavor text for another souvenir in the cheap seats.

In harsh times, the strongest currency is cooperation.

Is it now? What about superior size? Superior firepower? Superior numbers? In this block, a tribal block, on this card, an Elf card, I say yes it is. Elves do not have any of the above. But what they do have is a great spirit of cooperation, of helping each other overcome deficiencies in size and number to survive the threats of Otaria. 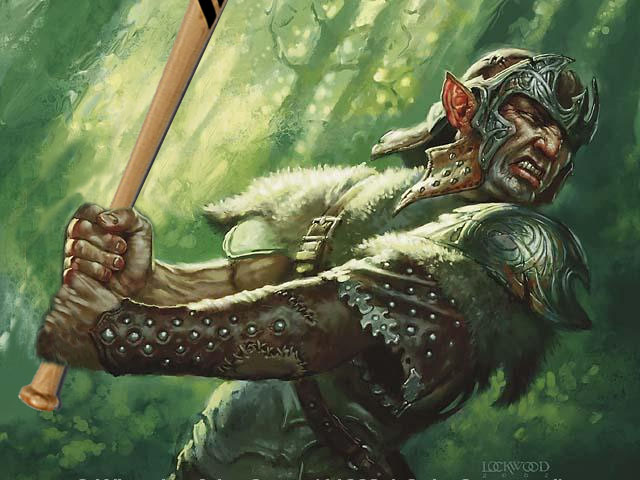 The Orioles, Cardinals, and Blue Jays would be ashamed. The birds in Onslaught were swinging newspapers. They were slumping, they were scuffling. 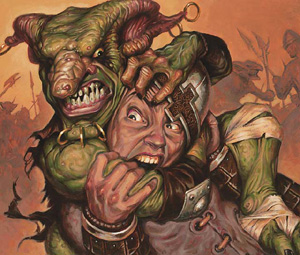 Now these guys can hit. Just a quick scan of their bench (art) and we can see that there are some big bats. Ah, but then I saw him. Sure, there might be a couple of home run hitters in there, but I was focused in on just one guy. He's near and dear to my heart (and based on the number of cards I have autographed, he's dear to many of you as well.) He's the Goblin Piledriver. Can he choke-hold his way to glory? Well, unfortunately no. While it is a snazzy little illustration complete with real-life Magic player Sean Fleming as choke-hold victim, the art just doesn't have anything to do with a protection-from-blue rabble-rouser. 'Tis a shame; the flavor text is worth a chuckle or two as well:

Throw enough goblins at any problem and it should go away. At the very least, there'll be fewer goblins.

Anyway, who's up next? Festering Goblin. But wait—he qualifies as a Goblin AND a Zombie. A switch-hitter! Let's just bump him down into the Zombie category, since I am still a little broken up about the whole Piledriver thing.

There are two players in the undead category (three counting Spined Basher, but he already whiffed, so who's counting him?). Festering Goblin and Gravespawn Sovereign. Each of these cards sports a fine piece of art. Somehow the combination of stinky goblin and even stinkier zombie has yielded something that I have always thought of as a little stinky buddy. I might be alone in that regard, since he walks alone and everybody else seems to shun him. It's not surprising; he's all rotted and smelly and gross, and sometimes he infects his own teammates. In my mind, the name and mechanic and art are all working toward the same putrid end. Once again, quality flavor text will be the deciding factor.

In life, it was a fetid, disease-ridden thing. In death, not much changed.

Ha! Like I said, stinky goblin... stinky zombie. It's hard for me to think of the little guy as a big hitter. Can he manage to put one out? I don't know. I'll think about it while we look at his bigger, more grotesque teammate, the Gravespawn Sovereign. 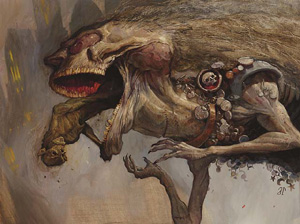 Now this is some pretty cool art, folks. On a completely aesthetic level, this painting has wonderful texture, subtle color, fine detail and a feeling of motion. Really cool. On a flavor level, we have a big, gross dead guy spitting forth a little gross dead guy. I think that's an interesting way to interpret the "reanimator" effect of this card. This guy doesn't just dig up graves, he gobbles 'em up and then spits out the dead... alive! That sounds pretty "Gravespawn" to me. And the fact that he enlists five underlings to help him set the sepulchral spread says "Sovereign" with authority.

The Cabal never expected its creations to create servants of their own.

Well lookie here, the Cabal is now a pyramid scheme! Is there anything more black than the subjugation of others? From a flavor perspective, I think this one's a deep, deep blast to the second deck where all the drunken college kids sit. That's 2 runs for the Zombies. (Festering Goblin petered out at third base, but was driven in by the mighty Sovereign!)

The Padres would be ashamed. (What were the odds that there would be a sports team with clerics as mascots!? Next thing you know there'll be a team called the Wizards! Wait... what?)