Revisiting an elegant combo for a more civilized age.

say that bad news comes in threes. Just ask Goldilocks. So with the recent departures of Taste the Magic's Matt Cavotta and Latest Developments' Aaron Forsythe, you just new that the proverbial third shoe would have to drop. I would like to announce right now that not only does my country boast some unusual proverbs, but I'm also leaving. Yes, it's true. If I don't get out the door right away, I'm going to be late for Evil Dead: The Musical. Don't worry, though. I'll be back in less than a paragraph.

Did you miss me? Well, good, I'm glad. With Lorwyn previews right around the corner, and Time Spiral rotating out of, uh, Block Constructed, I decided to take this opportunity to explore the nostalgia theme one last time. By "explore the theme," I mean use up the last shred of nostalgia I have, tell my final unused anecdote, scrape the bottom of the personal-history barrel. I mean, I might as well. Are we ever going to see nostalgia like this again? 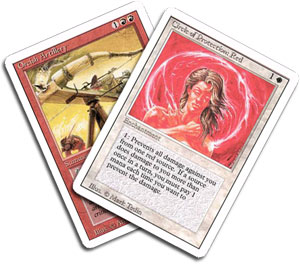 When I got back into Magic oh so many years ago, I was going through my old cards looking for deck ideas. My collection at that point was made up of Revised and Fallen Empires, mostly, with a few stragglers from other sets like Phyrexian Gremlins, Land Leeches, and Norritt. It didn't take long to divvy up the cards into piles of sixty. The blue cards were once again paired up with the black cards, as were the green cards. That left the red ones and the whites ones and the Obsianus Golems to fend for themselves. After a little brainstorming session, I concluded that the stack of eight million copies of Circle of Protection: Red could be used with my set of Orcish Artillery. With a Circle in play, the Orcs gain a sort of "activation cost" (the one mana needed to prevent the damage), but they lose their drawback. Eventually, the deck evolved to include Earthquake, Flame Rift, Orcish Cannoneers, and even Aftershock, but at the time the only other card I owned that would deal damage to me in a preventable way was Power Surge. In it went.

There was Manabarbs as well, but it didn't do much with Circle of Protection: Red. But wait! "It doesn't work with the Circles," I thought, "but it sure works with Power Surge, at least in a diabolical, damned-if-you-do, damned-if-you-don't sort of way." Manabarbs punishes each player for tapping their lands, while Power Surge punishes them for not tapping their lands. For whatever reason, this kind of cruel but quick-to-backfire combo really appealed to my inner mad scientist. Naturally, I arrogantly explained the entire thing to my opponents, taking no one by surprise.

Well, I was happy to see that Manabarbs is back in Tenth Edition, still doing its thing, turning every land into a painland, painlands into shocklands, and shocklands into, uh, cone-of-flamelands. Sadly, Power Surge (or, heck, Citadel of Pain) is nowhere to be seen.

Manabarbs is a tricky card. One good thing about it is that it's a reverse Howling Mine. With that card, and other symmetrical cards of its ilk (Rites of Flourishing, say), your opponent gets the benefit before you do. They can happily draw their extra card, play their extra land, and blow up your "Howling Mine," leaving you feeling like a dummy. Contrarily, if you play a Manabarbs, your opponent gets to take the maiden voyage to painland. One bad thing about Manabarbs is that while it's great at sealing the deal and preventing miraculous comebacks, it's not particularly good if you've fallen behind in the game and you are trying to get back in it. Unless...

Huh? Oh, yeah, I kinda trailed off there. Here are a few things you can try to make the most of Manabarbs.

As I've explained in incredible detail above, Manabarbs makes paying for your spells painful. Of course, that is only true if you're using mana drawn from lands to do so. If you're playing your spells for free by pitching cards or sacrificing lands, you will be remarkably pain-free. Red is full of such analgesic spells. You've got Cave-In, Pyrokinesis, and Fireblast, for instance. With a small initial investment, cards like Arc Blade, Seismic Assault, and Undying Flames become "free" sources of damage thereafter. The first two can be played or suspended pre-Manabarbs. Undying Flames can't, of course, being epic. Still, if you find yourself in a good position to play it, you can kill rather quickly since so many of your free spells have high mana costs. Another cheap-to-play card with an unwieldy mana cost is Greater Gargadon.

I decided to use Howling Mine to fuel all the card-pitching, largely because there aren't a ton of card-drawing options available in red. Pyroclasm and Rhystic Lightning aren't free, but the former should give you a chance to get to four mana relatively unscathed, while the latter is just fun to aim at your opponent's head while you have a Manabarbs in play.

If mono-red isn't your cup of tea, or your bag for that matter, you can always use the pitch cards of another colour, like, say, white. The most notable free spells in white, at least for our purposes, are an alliterative duo: Shining Shoal and Sunscour. Pitch-Wrath doesn't require much explanation, but Shining Shoal might. Unlike many damage prevention cards, which prevent the next instance of damage from a source, Shining Shoal prevents the next X damage. That X damage doesn't have to occur at the same time for Shining Shoal to be able to redirect it. This makes the Shoal effective against both strikes of a double striker, up to X activations of Pyrohemia (as long as they occur "this turn"), and, most importantly, up to X damage from Manabarbs. You can, for instance, pitch a six-mana white spell, choosing Manabarbs and your opponent as the two targets, then add six mana to your mana pool, blast your opponent for 6, and then use that mana pain-free.

As with the last deck, I decided to use some of the Future Sight re-suspenders (in this case, Arc Blade and Chronomantic Escape) as well as some permanent sources of damage (Honden of Infinite Rage, aided by Honden of Cleansing Fire). Darien, King of Kjeldor makes for a nice win condition in any deck that deals a lot of damage to its user.

If Extended isn't your thing, here's a Standardized version of the deck using many of the same cards. You can use the ol' Pariah + Stuffy Doll or Pariah + Cho-Manno, Revolutionary "invincibility" combos to save yourself from Manabarbs. With Stuffy Doll and Pariah, you can even kill your opponent at the same time.

While I've never used Sphere of Law with Manabarbs, I have used it with Overabundance, Invasion's answer to the question, "What happens when you cross Mana Flare with Manabarbs?" That was a very fun but not very good multiplayer deck that used all kinds of "plankton" cards like New Frontiers and Veteran Explorer, before ultimately killing with my lands courtesy of Natural Emergence. Urza's Armor is another good partner for Manabarbs. Feel free to squeeze either one of those cards into the above decks.

Since I want to branch out a bit from the white and red decks, I decided to look elsewhere for inspiration. Luckily, I didn't have to look far. Dang astigmatism. There's a card in Planar Chaos that is the ideal match for Manabarbs: Circle of Affliction. It's black's alternate-reality Circle of Protection. You get to choose a colour and fire off a one-mana Last Caress whenever you are dealt damage by a source of that colour. Contrary to what one might expect, or at least what I might expect, the player you target doesn't have to be the controller of the source that dealt damage to you. What this means is that you can damage yourself, with, I don't know, Manabarbs, and then ping your opponent for one. The beauty of it is, you can use the one mana that caused Manabarbs to ping you to pay for the Circle of Affliction trigger. Effectively, you can now tap a land to cause your opponent to lose one life. Since you gain life with Circle of Affliction, you are basically immune from Manabarbs as long as you are spending your mana this way.

Ideally, you'll want to have a lot of lands in play when you play out the combo, so to that end I included Korlash, Heir to Blackblade and, to a lesser extent, Herald of Leshrac. Since Korlash, Manabarbs, and two other cards I wanted to use (Tendrils of Corruption and Pyrohemia) all cost four mana, I added a set of Dimir House Guards. The rest of the deck is made up of cheap removal (Dead, Skred, even Soul Spike) and some cards that further the "it hurts to play your spells" theme (Pooling Venom and Kaervek the Merciless). I also added a Magus of the Mirror for kicks, because Manabarbs gives you the ability to lower your life total at will.

1 Magus of the Mirror

If there's one thing more annoying than taking 5 damage to play a Kavu Climber, it's taking 10. That's the situation your Climber-playing opponent might find him- or herself in while playing against this deck. There is so much good bounce in Standard right now. Among others, you've got Riftwing Cloudskate, Snapback, and, uh, Reality Strobe. One is "free" while the other two come cheap by way of suspend. I wanted to use Arc Blade as well, which suggested that Paradox Haze might be a good idea. Ancestral Vision soon followed.

Something I haven't mentioned yet is that you can dodge Manabarbs by using mana from non-land sources, like Elves or Coalition Relics. That's what I'm going to do here. With a pair of Coalition Relics in play, you can play or suspend every card in the deck without tapping a single land. I also haven't brought up the possibility of using cards like Worship or Platinum Angel to keep you alive while your mana is barbed. Might as well do it now, with the in-colour Fortune Thief. Add a Commandeer and voila.

I hope that your creative juices are suddenly flowing. You're going to need them.

Until next time, don't be such a pain.