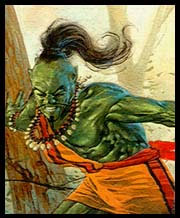 here's a very old saying about Magic creatures: bigger is better! Who can argue with that? The bigger your creatures, the better they pound your opponent into mush. High toughness makes them hard to kill with damage and makes them tough to block effectively, because often it takes more than one blocker to destroy them. High power means they deal massive amounts of damage to your opponents, giving them precious little time to find a way to get rid of the fatties before they lose.

Gigantic creatures are what the "Ground Pounder" deck is all about. It contains some of the biggest, baddest creatures ever to stalk the planes of Dominia. The deck is designed to get you to the stage of the game where you can drop these creatures onto the table and toll them right into your poor opponent.

Here's the deck's basic strategy: Play a big, hurkin' creature and beat your opponent down with it until it gets destroyed. Then play another big, hurkin' creature. Repeat as necessary. The cards in the deck that aren't big creatures will help you make this strategy work.

Your midgame strategy depends on whether you got some of those fast-mana cards into play. If you did, your job is to keep the threats coming and overwhelm your opponent's defenses. If the fast mana didn't work you, you'll have to rely on some of the direct-damage spells in "Ground Pounder" to cover you until you can start playing your muscle.

Ideally, your creatures' size will force opponents into two-for-one creature trades. They'll have to double-block your attackers to keep them from coming back for more. That means card advantage for you. (Mmm - card advantage.)

If your opponents manage to play creatures as big as yours, though, "Ground Pounder" has plenty of "utility spells" to get them out of the way. Use cards such as Lightning Bolt and Sonic Burst to blast them into oblivion. Or wait until your creatures have given them a beating, then use the direct damage to finish them off. If you draw Giant Growth, wait to play it until you can destroy a blocker and save your attacker at the same time.

Late in the game, start playing the XXL beasties: Shivan Dragon, Force of Nature, Crash of Rhinos, and their friends. Your utility cards take on a different purpose now. Start ignoring enemy creatures if possible and turn the torch on your opponents. A well timed Fireball or Lava Axe can dash their hopes.

When you're playing against the "Aerodoom" deck, keep these things in mind: (1) "Aerodoom" doesn't have that many countering spells. Don't let your opponent scare you into hesitating. Stick to your game plan and press the attack. (2) Be careful how you spend your direct-damage spells. "Aerodoom" can destroy any of your creatures with its creature-kill spells, but your heat can destroy only creatures with the right toughness. Don't waste Fireball or Sonic Blast to destroy small creatures that won't deal much damage to you anyway. Save them for the really big flying creatures you can't block. In the end, your creatures are bigger than your opponent's, and flying won't help that much if you're already exchanging blows. 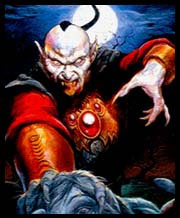 hen you think of big creatures in blue and black, what leaps to mind? Flying, of course. Both colors have really giant creatures that deal a lot of damage and can't be blocked by your opponent's landlocked monsters.

It's no surprise, then, that we've loaded "Aerodoom" with big fliers. How do you win with the deck? Survive the early game with removal spells, then take to the skies! Your Drakes, Djinns, and Elementals will have your opponent diving for cover.

This deck's primary goal is to play massive flying creatures. But what do you do until you get enough mana? What blue and black do best: control the game. "Aerodoom" has a variety of cheap spells that can foil your opponent's early-game plans. Some of them also help you ensure that your opponent won't spoil your fun.

The "Aerodoom" deck has a couple of countering cards. Usually you'll play these early, for defense. For example, your opponent might try to get a jump on you by playing fast-mana cards. These are worth countering, just so you're both building mana at the same rate. The countering cards also have a nice psychological effect. Your opponent will have to think about whether you're holding one when he or she tries to play the key spell. The "psych-out" value alone can help you control the match.

You have two other kinds of early game control cards: creature-kill spells and library-manipulation spells. The creature-kill spells-Terror, Diabolic Edict, and Death Stroke-are cheap ways to wipe out dangerous creatures that get past your defenses. They can also get you ahead in the creature game. After all, if you're trading one of your spells for one of your opponent's creatures, that means you'll have more creatures left to play. You also have excellent library-manipulation cards like Impulse and Brainstorm. These help you ensure that you always draw exactly the cards you need to deal with what's happening in the game. They're also useful to make sure you draw just enough lands, so you can play the real heavy hitters sooner.

"Aerodoom" also has a surprising range of smaller, more affordable creatures to put on some pressure. An early Skittering Horror or Tar Pit Warrior can take charge early and force your opponents to play defensively. And that will buy you time to bring out the big guns.

Once you finally get enough lands on the table to start playing the really big flying creatures, it's in the bag. Your opponents should be scrambling to get as much land in play as you, so they can keep up in the creature race. In the meantime, your flying baddies can deliver beatings to your opponents before they can hit back. And even if the land race is a dead heat, you've got countering and creature-kill spells to make sure the game stays under your control. If you and your opponents play creatures at the same rate, chances are good that you'll have the upper hand, because you can block their creatures, but they probably can't block yours!

When facing the "Ground Pounder" deck, remember your strengths and weaknesses and work with them. Think carefully before playing one of your creature-kill spells. Is the Llanowar Elves really a threat? Or should you leave the Elves alone and wait for something bigger to appear? Likewise, treat your countering spells like gold: trade them only for a spell that would really mess you up. For example, wait for your opponent to play that crucial Giant Growth that lets a smaller creature over come your awesome one. Then counter it. Effective and demoralizing. Also, watch for the spells that take out several of your cards at once, such as Fireball.