reetings, digital Planeswalkers! After today's downtime, Magic Online will come up with a new build of the beta client available, and I'm back once again to walk through some of the latest changes. (For a complete changelist, see this forum thread.)

Before we jump in, though, I want to make sure you saw Chris Kiritz's article yesterday announcing the Wide Beta Spotlight! After downtime on Wednesday, May 8, we will have two days during which the beta client will be the only Magic Online client available. The first day will be our normal tournament offerings, but on Thursday, May 9, starting at 10:00 a.m. Pacific, players participating in the Wide Beta Spotlight will be able to play in Dragon's Maze Prereleases a day early!

In addition to early Prerelease queues, qualified players participating in the Wide Beta Spotlight can enter the code "WBSpotlight" in the bottom left corner of the Magic Online store and get a full-art Dryad Militant! This code is only good during the Wide Beta Spotlight, ending at 10:00 a.m. on Friday, May 10. Please see the full details of the promotion below to see if you qualify.

For many players, the Wide Beta Spotlight will be the first time they have played on the beta client. Let's take a look at some of the features and improvements that await them!

I'm going to start with the most significant change to the beta client since the last update: the duel scene user interface (UI). As I've discussed in previous articles, card size on the battlefield is a high priority for the play experience. We want to maximize the card size, and this is accomplished most directly by increasing vertical space on the battlefield.

Allowing players to lower their hands below the size of a card was the first step toward increasing vertical battlefield space, and that has been an option for as long as the beta client has been available to play. However, the location of the prompt box in the lower left and the options on the lower right—both attached to the hand—put limits on how far down the hand could go. We really wanted more vertical space via hand size, though, and in order to do that, we needed to detach the hand from the prompt box and the options.

By attaching the prompt box to the left pane of the battlefield and attaching the options to the right pane, the hand became free to drop all the way down to the point that only the card titles are showing. I've used before-and-after shots in previous articles, but to show the space captured with this change, I'm going to compare V3, beta client before, and beta client after. If big battlefield is your priority or your hand is empty, you can adjust your hand size to achieve this card size on the battlefield: 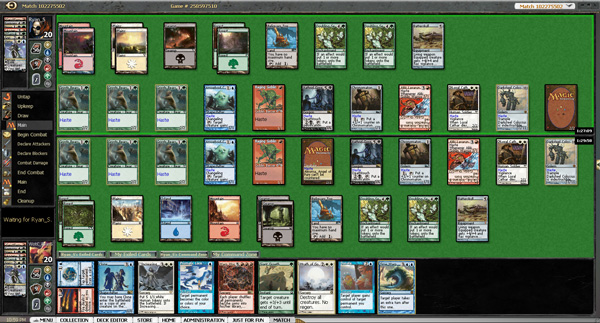 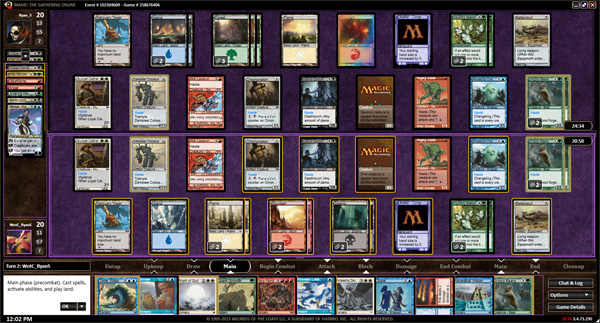 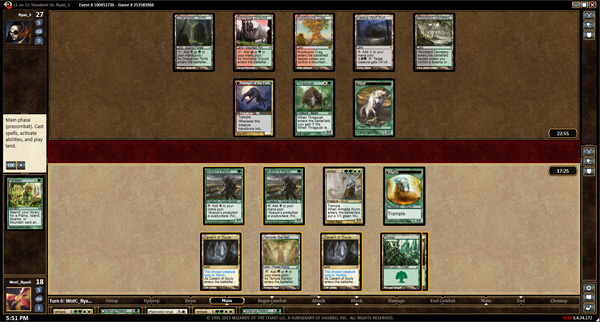 We are taking this a step further in an upcoming update for the Wide Beta Spotlight, in which the phase bar can be collapsed out of view to reclaim more vertical space. Finally, we are also going to remove the "footer" contents from the game window (the clock and the copyright stamp), further increasing vertical height. Once all of these changes are in, you can play with the red zone always open and still have larger cards on the battlefield than you can get in V3 at the same screen resolution.

We've been making steady progress with each build on improving the chat experience. The latest build is no exception, bringing with it functionality that enables players to notice, read, and respond to chats they may have missed when first sent. We've been alerting players about incoming messages for a while now via the new "toast" system (the temporary messages that appear in the lower-right corner of your screen when certain things happen on Magic Online), but it was problematic when players didn't notice the toasts. There was no way to know that you had missed a chat, and no way to find and catch up with a missed conversation. We didn't want to resort to the V3 method of "pop up a chat over the middle of your battlefield while doing alpha-strike combat math" though, so we needed an alert system.

As of this build, if you have an unseen chat, the "Chat" option in the navigation bar of the main client window will pulse. Clicking on the Chat option will show you a list of all the chats you have missed, and you can click on them to pick up the conversation.

There are several improvements and fixes to the play lobby in this build. Much of the changes have to do with searching and filtering, fixing how the text search works, and how results update after a filter or search change, but there are some additional Play Lobby features as well.

A major overhaul of the Magic Online trade system was not in the scope of this client project, but we wanted to include some features in the new client that improved trade experience, even if at its core it is a port of the V3 classified-style trading system. Besides some improvements to the flow that reduce the number of clicks to complete a trade, we have added a couple of search features that make it much easier to search the classified system.

First, we have added the advanced search features to the text search. In V3, the classifieds text search looks for exactly the string you type in. Now, if you type in multiple words into the search field, the client will display all classifieds containing those words, regardless of whether or not the words appear consecutively in a listing. If you want to search for a single string containing multiple words, putting quotes around your text string will search for that exact string.

Once you have filtered the many traders down to the ones with classifieds listings containing your search words, you browse through each listing, looking for what that trader has to offer for the thing you are searching for. To make this easier, the trade search now highlights the instances of words in your search. This makes is much easier to pick out what each trader has to say about the words you've searched for.

Once you have found the trade partner you are looking for, the flow of the trade itself is much easier to follow and takes fewer clicks from start to finish.

We understand there is a strong desire in the Magic Online community for a fully redesigned trade system. While it wasn't in the scope of this project to overhaul trading, we believe the improvements to the existing trade system in the beta client represent a true upgrade to that experience over V3.

The treatment on premium cards to this point in the beta client has looked pretty cool while animated, but frankly unacceptable while static. The static version of the premium card treatment left the card name difficult to read and its color sometimes hard to discern at a glance.

While it can be tricky to apply a static treatment that makes the card look different and shiny without detracting from its readability, we knew we could do better than what we had. We are continuing to tweak this treatment, and the newest build has a big step in the right direction, providing something far more readable in a static state while still looking cool in an animated state. Here's a before and after: 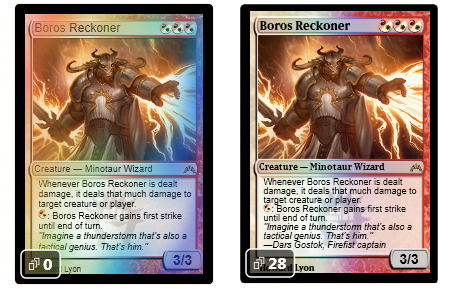 Here's what a battlefield looks like with some animated premium cards:

We make a lot of smaller improvements each build that don't always warrant a major callout in my articles, but here's a roundup of some of the more significant features.

So Many Changes, So Little Time

As usual, the quantity of great improvements to the beta client exceeds my time and space available to discuss them. I hope you check out the full changelist and then join us for the Wide Beta Spotlight and some Dragon's Maze Prerelease fun!

If you do check out the beta client, please fill out this feedback form and tell us how we are doing. Your input is immensely important to us. After you fill out the feedback form, you can also share your thoughts in the forums, or contact me on Twitter.

Until the next new build, good luck and have fun!

Redemption Code Promotion Terms
Offer is good for a license to use one digital promotional version of the Dryad Militant card. Offer expires at 10:00 a.m. Pacific Time on May 10, 2013. Offer is not valid for cash or cash equivalent. Offer is valid for redemption by account holders whose billing address is located in the United States only. Only accounts in good standing may take part in this offer, and each such account may redeem the code only one time. Offer is non-transferable and use of the code in unauthorized advertising, marketing, sweepstakes, or for other promotional purposes is strictly prohibited. (return )