Betrayal Just Around the Corner

The Betrayers of Kamigawa previews have started, and the prereleases are coming up on January 22nd and 23rd. That's one short week away! As promised, Saturday School has a preview card from Betrayers, and this card is so big I had to use a shoehorn to fit it in (more on that later). Let's hit the books first, and then we'll sneak a look at the next big thing.

In the past, I've snuck preview cards into Saturday School. The Patrons in particular, and the Offering ability in specific are so huge that sneaking them in anywhere is a challenge. So just what is a Patron? You've probably already seen their names in a BOK vignette. Here's just one of the Patrons for your perusal: 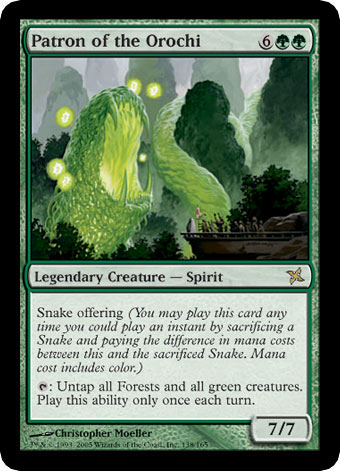 I'm going to leave the strategic considerations to you and the other columnists, so what we're going to cover here is the way Offering turns playing spells on its proverbial ear.

Questions about times when you can play Offering:

So there you have it—gigantic creatures that come flying out of your hand and sneaky ninjas diving in to stab you with little warning. And that's just the beginning of the Betrayal. Best of luck at the prereleases!