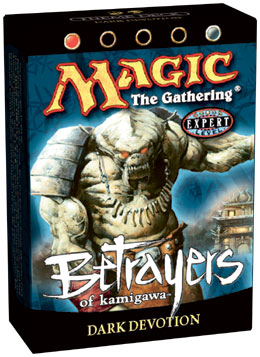 he “Dark Devotion” deck depends on powerful Demon Spirits, called oni, and the Ogres that worship them. The key to success with the deck is getting both Ogres and Demons into play at the same time. Their combined size and strength should be too much for your opponents to deal with.

Ogres are pretty big creatures by themselves, but many of them get even better when you have a Demon in play. Villainous Ogre becomes a 3/2 regenerating attacker that will be very hard for your opponents to stop. A charged-up Bloodthirsty Ogre can tap to take out an enemy creature every turn if one of its oni masters is around. If you have Ogres but haven’t drawn a Demon, why not make your own? Oni Possession makes any creature it enchants into a big bad Demon, so all your special abilities that need a Demon in play will suddenly turn on.

As expected, the Demons in the “Dark Devotion” deck are extremely vicious creatures. For example, Painwracker Oni is a particularly deadly 5/4 with fear. If your opponent doesn’t have any black creatures, you can expect Painwracker Oni to win the game all by itself! Yukora, the Prisoner is the ultimate Demon at a massive 5/5 for only four mana—bet your friends can’t top that! And just as your Ogres get better when you have Demons in play, your Demons become easier to manage when you have Ogres in play. Again, the key to winning with this deck is finding Ogres and Demons and keeping them both on the table!

An especially savage combo in the “Dark Devotion” deck involves Heartless Hidetsugu and Overblaze. Hidetsugu taps to deal damage to each player equal to half of his or her life total, rounded down. And Overblaze can double the damage it deals. Together, this combination wipes out every player with an even life total—even someone at 20 life! Just make sure your life total is odd!

To improve the “Dark Devotion” deck, try adding more Demons to make sure your Ogres’ special abilities are always active. The Kamigawa 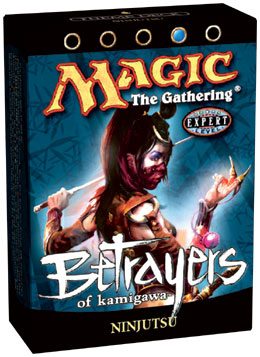 he “Ninjutsu” deck focuses on the coolest creature type of all—Ninja. Ever wanted to draw extra cards every turn? Bounce every creature your opponents play right back to their hands? With Ninja at your command, you can do all that and more. Get your creatures past your opponents’ defenses early and often so that you can use the ninjutsu ability to maximum effect.

Ideally, your first few turns will go like this: Start with a cheap creature like Teardrop Kami or Soratami Cloudskater. If your opponent doesn’t play a creature early on, use the ninjutsu ability to put Ninja of the Deep Hours into play as soon as possible and start drawing extra cards. Play out more cheap creatures, and then if your opponent musters a potential blocker, sneak in a Mistblade Shinobi using a flier or other unblocked attacker and return your opponent’s creature to his or her hand. While your Ninja are going on the offensive, you can hide behind good blockers like River Kaijin, Kaijin of the Vanishing Touch, and Tomorrow, Azami’s Familiar. All those creatures work wonders at slowing enemy attacks.

Once your Ninja are on the board, the “Ninjutsu” deck has lots of ways to get them through to hit your opponent again. Phantom Wings and Lifted by Clouds can give them flying. Soratami Mirror-Guard and Minamo Sightbender can make them completely unblockable. Mystic Restraints and Teardrop Kami can tap potential blockers, letting your Ninja through. Whenever you see an opportunity to use a card to let a Ninja hit your opponent, you should take it. The more your Ninja generate free cards and free bounce effects, the further ahead you’ll get.

To improve the “Ninjutsu” deck, add more one-mana creatures like Teardrop Kami to increase your chances of sneaking out Ninja of the Deep Hours on turn two. Once you have it or another Ninja on the table, you’ll want to bounce, destroy, or counter every creature your opponents play. Common spells like Unsummon, Phantom Wings, Condescend, and Mana Leak do the job best. And once you’ve seen how devastating Shuriken can be in the hands of a Ninja, you’ll want to get your hands on a few more of it as well! 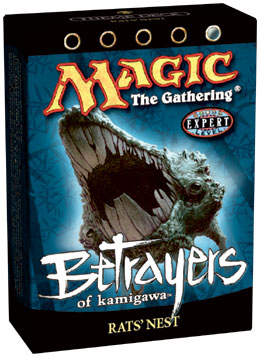 eware the Rats of Takenuma! The quick creatures of the "Rats' Nest" deck will gnaw away your opponents' life totals while its powerful discard and destruction spells tear apart any defenses. With eleven creatures that cost one or two mana, you're sure to get off to a fast start. If your opponent gets some blockers out, you have Horobi's Whisper and Befoul to blow them away and keep attacking. And just as your opponents are getting ready to play their most powerful, expensive spells, you can play Three Tragedies or use your Nezumi Bone-Reader to make them discard their hands and leave them with nothing. With no options and no hope, the opposition should quickly fall to your growing Rat horde.

The deceptively simple 2/1 Nezumi Cutthroat is a great card in this deck. The Cutthroat has fear and can't block, so it stays out of most fights with other creatures, but this Rat can deal a lot of damage to your opponent in a hurry. Enchanting it with Midnight Covenant can increase the hurt considerably. If you have a Ninja in your hand, an unblocked Cutthroat also provides the perfect conduit for its ninjutsu ability.

The centerpiece of the deck, Patron of the Nezumi, is obviously extremely powerful, but playing it can be pretty tricky. Try to wait until one of your Rats is about to be destroyed—either by a spell or by combat damage—then sacrifice that Rat to play the Patron using its Rat offering ability. With this 6/6 on the board, your opponent loses a life every time he or she loses a permanent. Be careful not to miss opportunities to force life loss this way!

To improve this deck, look for spells that help Rats. The Champions of Kamigawa set offers Marrow-Gnawer, a legendary Rat Rogue who can turn four Rats into ten Rats in just a couple of turns, as well as granting fear to your Rat Ninja. Swarm of Rats from the Eighth Edition set gets bigger with every Rat you have in play. And the Eighth Edition set's Nekrataal, while not a Rat, is a perfect fit for this deck. Not only does it destroy a potential blocker when it comes into play, but you might get the chance to return it to your hand later using a Ninja so that you can play it again! Tricks like that are sure to make your opponent say "Rats!" 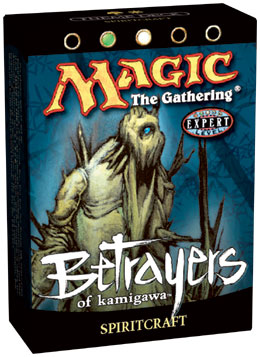 ermanents with "spiritcraft" have abilities that trigger "whenever you play a Spirit or Arcane spell." Since nearly every nonland card in the "Spiritcraft" deck is either a Spirit or an Arcane spell, nearly every spell you play has the potential to generate two, three, or even more bonus effects for free! With all these crazy abilities at your disposal, a properly timed Arcane spell can send your opponent's head—and creatures—spinning.

Most of the time, you'll want to play your Spirit creatures before you attack so that your other creatures will benefit from those spiritcraft abilities before combat. The best time to use your Arcane instants, however, is right after your opponent blocks (or right after you block). Say you attack with Horizon Seed, Kami of the Hunt, and Scaled Hulk. After your opponent blocks, you play Blessed Breath. Because each of your three spiritcraft creatures generates a bonus effect, not only will you give a creature protection from a color, but Kami of the Hunt gets +1/+1 and the Hulk gets +2/+2, plus you'll get to regenerate a creature. Not bad for playing one simple spell! Better yet, if you then play another Arcane spell, you get all those extra effects again! Since your opponents can't be sure how many Arcane cards you have in your hand, they'll never know exactly how to handle your creatures.

Another way you can get more free effects with this deck is by using cards' "splice onto Arcane" abilities. If you have Kodama's Might and Vital Surge in your hand as you play a Blessed Breath, you can pay o1oGoGoW to form one monster Blessed Breath! You get all three effects, but only one card goes to your graveyard. Choose carefully which of your Arcane cards you play and which you want to reuse later.

To improve this deck, try adding inexpensive spiritcraft cards with big effects. Baku Altar pumps out a steady stream of 1/1 Spirit tokens (which unfortunately don't trigger spiritcraft abilities when they come into play). The Champions of Kamigawa set's Soilshaper has a spiritcraft ability that turns a land into a 3/3 creature for a turn, giving you extra attackers or surprise blockers. And Long-Forgotten Gohei from the same set gives all your Spirits +1/+1 and makes all your Arcane spells cost o1 less. Talk about the best of both worlds!