The Boros Legion Brings the Beatings

I jump into today's Ravnica preview card, a quick note. Though this column has so far been based on investigating interesting play situations in something of a Q&A format, that's not all this column will be doing. "The Play's the Thing" is a broad umbrella to work under, and while those articles you've come to expect will be the meat and potatoes of this column, I'll occasionally be taking other approaches to tackling the issue of playing better, much in the same spirit as JMS's "interlude" articles in his Building on a Budget column. In addition to that, Scott's going to have me covering other topics as well from time-to-time, such as running preview articles for Ravnica.

The Role of Non-basic Lands

The job of any non-basic land is to provide you with options. A basic land does its job well, but it only does one job. The most fundamental nonbasic lands are duallands of various types. At a price, they will provide you with your choice of two or more colors of mana. That allows you to play two or more colors and still have a solid mana base, which is vital if you are going to take advantage of all the multicolor cards in Ravnica block. Ravnica has some of the best duallands since the originals. Playing multiple colors is what Ravnica is all about, and you are provided with powerful tools to help you. Even without Ninth Edition you can play three colors with a better mana base than you would have had trying to play two colors several months ago in Standard. With Ninth's help, the sky is the limit.

Like most things in Magic, you don't want to pay for more color than you need. You'll need a lot of color, but by making color so cheap the cards have opened the door once again for colorless lands to go into multicolor decks. Every dualland that you play is an additional source of colored mana. If the price of exchanging a basic land for a dualland is cheap enough, it starts to become worthwhile to exchange two basic lands for a dualland and a colorless land in order to take advantage of what that land has to offer. You need a certain number of lands to avoid mana screw, and by trading surplus colored mana for options that can impact the game and use your extra mana you can guard against mana flood as well.

In fact, a land that costs a lot of mana to activate and offers you a powerful effect is a perfect way to balance out your mana. If you don't have enough mana it provides mana, and if you have too much then you can pick up its powerful effect at little cost. You invest very little and can reap great benefits. In this case, there is a land tailor-made for creature decks looking to use many of the new monsters in Ravnica: 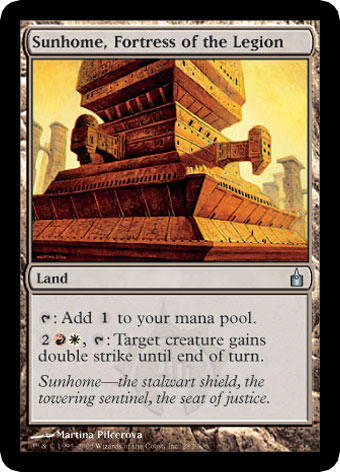 Combining red and white has the power to turn even lowly Goblins into mighty Legionaries. The Legion is strong, and Sunhome can make it stronger. Double strike is the most dangerous of all the standard special abilities in the game by a wide margin. When used fairly, double strike doubles the power of a creature, but it also doubles everything that increases the power of that creature. It doubles equipment, it doubles Auras, it doubles instants like Kodama's Might and it doubles global effects like Glorious Anthem. To protect against that danger, cards that offer double strike have to charge a high price. Skyhunter Skirmisher is by far the best double striking creature prior to Ravnica with a price you can afford (Dragon Tyrant has some interesting applications, but none of them involve paying

). For example, compare the Skirmisher to the same card without double strike:

that you paid for double strike, which is also the pattern followed by other cards that grant double strike. Consider Fireshrieker and Goblin Burrows, the cards that most closely parallel Sunhome, Fortress of the Legion:

Goblin Burrows is easier to play and easier to activate, since it goes into mono-red decks, but look at the jump in power you've been offered. Fireshrieker actually costs more than Vulshok Morningstar, so it looks like its value is somewhere between +2/+2 and +3/+3. That would be a strong effect, but double strike is even better than that if you're abusing it or your men are large. Double strike can't protect you against damage spells, but it has the power to knock an opponent right out of the game. Take Godo, for example, who will have no trouble doing twenty damage with room to spare if given double strike with Sunhome. With Tatsumasa, the Dragon's Fang equipped, he'll do sixteen even if you throw a blocker in his way.

White/Red is a color combination that will offer you a lot of solid creatures at low cost, both new ones in both colors and old white ones. The deck that uses these cards will naturally want to use Equipment, and in particular it will wish to use Umezawa's Jitte. With even two counters, Jitte can boost a lowly Suntail Hawk up to 5/5 and Sunhome can effectively boost that up to 10/5, taking half of your opponent's starting life total out of nowhere. By saving up Jitte counters, you can double four or more of them with one Sunhome activation.

Look at what this card does to Genju of the Spires once you have the mana for both on the same turn. If they let it through, they take twelve damage. If they block, you have six points of first strike damage and then six more points of normal damage… and the Genju can come back on another Mountain if they manage to kill it. Without removal spells, almost any army is going to have no choice but to throw a chump in your way every turn. Yes, this costs a total of eight mana to pull off, but it gives you a deadly endgame at almost no additional cost. Genju of the Spires is a great offensive card for a deck that has even a handful of Mountains, and Sunhome has many other uses. The result is that your opponents now have to spend the entire game under the threat of a ticking time bomb.

You can even use instants. Red and white have ways to pump power but you could also turn to green, using the new lands to play all three colors. In Extended, you can use a card like Goblin Sledder to create a big creature to finish them off. With Goblin Piledriver, this could even come naturally. If you throw in the ability to play or sideboard white cards, that might be justification enough to throw in a few painful lands and buy yourself enough white mana to run Sunhome, Fortress of the Legion. That goes double for Legacy where you can play Plateau, making this all but free in terms of meeting the color requirements for your deck.

Even if you don't get to abuse Sunhome, Fortress of the Legion with any of these cards, the very threat of Sunhome can turn a game around on its own. When you attack with your army into his, he has to worry about your ability to use Sunhome on any of your creatures. Even a tiny creature like Isamaru, Hound of Konda becomes hard to block. If he blocks with a creature that has less than three toughness, you can choose whether to trade creatures or trade your mana for his creature instead. If he blocks with something bigger, you'll be able to trade your one drop for his three or four drop. Then after combat you can smile and cast your spells knowing that you've thrown a giant monkey wrench into his blocking options… and that every turn Sunhome becomes a bigger threat as the creatures get larger and your mana supply expands. Matches where your opponent would have owned the long game have been turned on their head by the presence of a land.

Even without seeing the other cards that White/Red has to offer, it is clear that Sunhome, Fortress of the Legion offers the guild a great boost. I can't show them off yet, but there are others waiting. At a low cost, Sunhome, Fortress of the Legion solves multiple problems these decks have historically had, granting them explosive turns and an effective long game without the need to play any cards that can't be used in the early turns. For decks that already are shooting for the long game, Sunhome frequently threatens to speed up your kill by at least a turn. Double strike may not come cheap, but it is worth the price and more. It turns small annoyances into fierce warriors. It turns fierce warriors into legends.