In recent articles, you may have seen R&D playtest cards that looked like this:

But you've also seen R&D playtest cards that look like this:

…and it's these cards that R&D playtesters spend much of their time playing. The fancy printouts are primarily for Limited play during periods when the set's contents are relatively stable. But during heavy Constructed testing, when power, toughness, abilities, and even cost are switching all over the place, developers tend not to bother writing out all of the information that might just change anyway. They use shortcuts—like, say, this one: 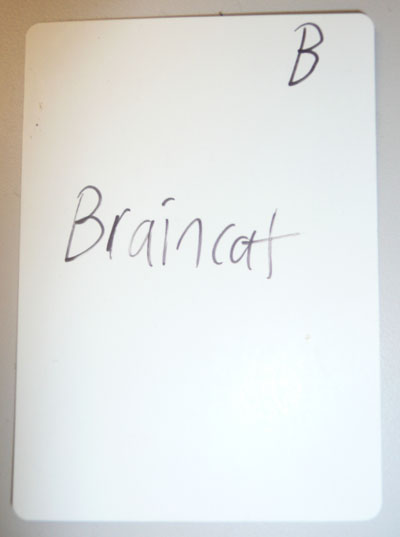 Wait, does that say Braincat? What the heck is a Braincat? Is that a creature?

Nope, it's not a creature—Braincat was printed in Lorwyn as Thoughtseize. So what's with the name?

It seems that at one point, the card's proper playtest name was "Braincut." One of the playtesters wrote it too quickly, and the result led immediately to the question, "Braincat? What's Braincat?"

The inevitable reply, and later a frequent invocation on playing the spell that was now virtually always known as Braincat?