Setting the stage for Fifth Dawn

The last chapter in the story of Mirrodin (at least for now), Fifth Dawn may feel a little odd, at first. Some of its themes appear to be more at home in the Invasion cycle than in the modern artifact cycle! But even this is part of a larger theme: the conflict between flesh and steel, artifacts and colors, the organic and the metallic. Each half-flesh, half-metal inhabitant of Mirrodin embodies these conflicts, and the sudden appearance of spells and creatures that feed off of different colors of mana just goes to show that the tensions between the living and the created will reach its breaking point.

Fifth Dawn is all about completion. You can see it in the cards, in the prominence of colored mana, and in the printing of the long-awaited final piece of a high profile cycle of artifacts, which will bring with it the making of a champion. And, of course, you can see it in the story. With the final sun in the sky, the planet of Mirrodin is, in its own way, also complete, bringing new wonders and horrors into being. Magic never before possible in this carefully planned and created planet suddenly springs to life. Some are strengthened by these new changes. Others will be consumed by them.

The story of Darksteel ended with an event that was both wonder and cataclysm: the eruption of the green sun from the midst of the Tangle, creating the final lacuna and bathing the planet in a new emerald glow. So what do the Viridian elves and Sylvok druids think of this new sun that reflects the color of their magic? Many don't think of it at all – serious casualties followed the sun's violent ascendance into the sky. The other races of Mirrodin take it as a sign, though they differ in their opinions of what the sign points towards.

To Memnarch, the mad artifact creature who has schemed for millennia to stop his own impending transformation and escape the confines of Mirrodin, the appearance of the sun is a mere distraction. In fact, the ascendance opens the opportunity to enact a new plan, one that will allow him to gain the power of a planeswalker. Then, nothing would be able to stop him from ending his internal corruptions, and gaining access to the planes beyond. Already his forces are rebuilding, and continue to roam the planet cutting down any obstacle in their path, living or otherwise. These will purge all resistance from the surface of Mirrodin, and pave the way for his own ascendance… into godhood.

But there remains a very large monkey wrench in Memnarch's plans: Glissa. The Viridian elf has seen a lot of bloodshed, but is determined to see things through to the end. That might be difficult, considering that within the first few chapters of the Fifth Dawn novel, she's being put on trial by her own people, with her very life at stake. Besides Memnarch's plotting, it seems that the entire planet is sliding into chaos. The Vedalken, shaken by the recent upheavals in their leadership, are determined to make up for their losses by uniting further with Memnarch. The Neurok respond by reaching out to other races, in hopes of escaping the Vedalkens' tyranny. A necromancer once enslaved by the Nim now uses his powers to create his own personal army of powerful undead. Raksha Golden Cub, leader of the Leonin, hopes to finally end the long, wearying conflict between his people and the Nim. With all these events whirling around her, Glissa has her own personal tragedies to contend with: the demise of her companion Bosh, and the capture of Slobad, goblin artificer, by Memnarch. He is put to work building and improving his own enemy's forces, and his handiwork may lead to the end of organic life on Mirrodin.

Then there are the disappearances. Creatures and citizens alike have been vanishing, seemingly at random. Where have they gone, and why? Does all this have something to do with the origins of life itself on Mirrodin? Even Memnarch's most trusted allies are not immune to these strange events, and in the end, it may be these vanishings that turn the tide one way or the other in the battle for control of the plane. Everything the maddened Memnarch ever wanted is within reach. All his traps have been laid, and all his plans have begun to take hold. He is at the apex of his power. The time will never be better, and the prospect laid out before him on a silver platter will never come again. Now that an entire planet, his entire planet, is turned against him, he will seize the opportunity that has been given to him.

Glissa too is at a crossroads. She has lost much in her journey. It seems that everywhere she turns, she is attacked by artifact creatures, or discovers a new agent of Memnarch disguised as an ally. With time running out, few to trust, and Slobad under Memnarch's thrall, she'll need every bit of strength she has just to get herself out of all this alive, never mind saving her own planet.

And so we come to our card preview, a very appropriate one, given his increased importance in the story of Fifth Dawn. 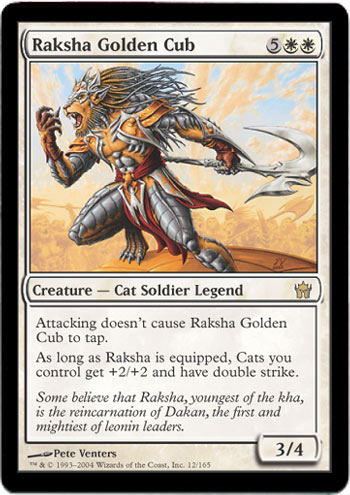 Raksha Golden Cub is the youngest ever kha. His wisdom and battle prowess, even at this young age, have led some of his people to believe that he is the second coming of Dakan, first kha and most legendary of Leonin. Whatever the truth of the matter is, he will shape the future of Mirrodin's inhabitants by his actions, and will certainly be the mainstay of many Cat decks. Though he weighs in at a hefty seven mana, Raksha is worth every one. The biggest and perhaps best of the white creatures that get better when they're equipped, Raksha is made for battle. Put a weapon or shield in his paws, and he beefs up into a 5/6 double-striking powerhouse. Oh, yes, and he also gives +2/+2 and double strike to ALL your Cats. Fill the skies with 4/4 Leonin Skyhunter and dominate the ground with 4/6 Leonin Abunas who turn from pacifistic guardians to monstrous attackers. To make the hurting almost unstoppable, give Raksha something that will prolong his life – Slagwurm Armor, or even better, Whispersilk Cloak or the Shield of Kaldra, will almost guarantee that all your cats will have their claws out and sharp!

Raksha gets even better once you bring him out of the confines of Mirrodin. With fellow powerhouse Legends like Jareth, spells like Waiting in the Weeds, and other power felines like Krosan Vorine, Spectral Lynx, and Phantom Tiger at your disposal, your army will get mean quickly. Imagine trying to give your cat a bath… only your cat has the size and temper of an irritated lion! That's the kind of foe a properly equipped Raksha brings to bear.

Now the suns are out, and the gloves are off. The normal lives of every being on Mirrodin has been permanently sent off-kilter. Something big must happen, and soon. But will it bring redemption or destruction? Either way, the story of Mirrodin will go out with a bang. Just remember that, when the dust settles and the bodies have been buried, the beginning of the end all began with the rising of a sun.

It's time for an adventure! We've returned to one of the most popular worlds in all of Magic: Zendikar. It's a world of wild mana, plucky adventurers, and treasures for those daring eno...