Posted in Building on a Budget on November 3, 2010

ello and welcome to Infect Week here on magicthegathering.com. Last week I presented some fun ideas for Game Day. A lot of you put together one of the decks from last week's column and played them to impressive finishes. 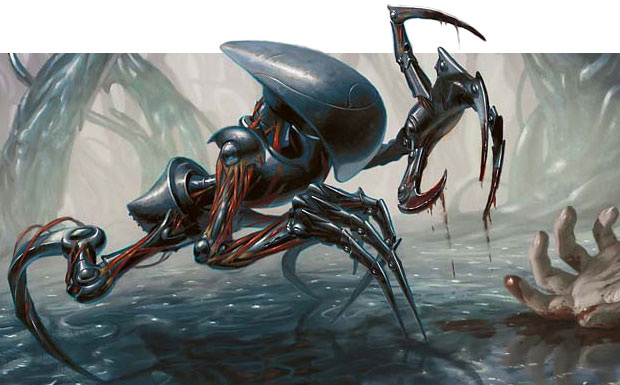 The Phyrexia! did particularly well. To be honest, I hadn't played many games with the deck when I initially wrote about it. All the positive feedback made me take a second look at this poison deck that pursues quick victories with reckless abandon. Let's take a look at the list.


It's beautiful in its simplicity. You play poison creatures. Attack. Play lots of pump spells. Then, well, you win.

There's something so wonderful about winning on turn three the first time you play with a deck. A warm fuzzy feeling. The last time I did this was with my Extended Elf Combo deck from last winter.

I played some more matches and was continually impressed with the deck. There were a few problems, though, that I felt could be fixed through some informed tweaking. Mono-red decks seemed to pose the biggest challenge. They burned all my infect creatures and I was unable to stick one for a nice big swing.

Two cards were always less impressive than one might expect. Putrefax and Primal Bellow never seemed as good as the rest of the cards. I decided that I should try to play with some more infect creatures to make the deck mulligan less. I also wanted to play a few games with Prey's Vengeance and see how it went. Here's the list I played.

The deck was certainly performing better against the red decks. Corpse Cur does an excellent job making a constant stream of infect creatures. The deck continued to perform very well against Valakut, the Molten Pinnacle and Blue-Red-Green variations, especially before sideboarding.

It still didn't feel right, though. Cystbearer was terribly unexciting and Corpse Cur was very bad in the non-red match-ups. I also found myself wishing that Prey's Vengeance was Primal Bellow. To be fair, the new version did not seem that much better than the original. I wanted the deck to be more oriented to winning as quickly as it possibly could.

One of my opponents suggested that I try playing with Smoldering Spires. I played a few games with the following list in an effort to test that particular land.


Things certainly got better. Smoldering Spires was letting me slip creatures past my opponent's blockers to steal a lot of games. Corpse Cur seemed like the biggest loser in this list. It performed very well against red decks and very poorly against everyone else.

I decided that I was already playing red and I could easily play with some copies of Copperline Gorge because they're fairly easy to acquire and the current list is completely devoid of rares at this point. Lightning Bolt continues to be one of those cards that I put into decks without asking any questions. Lightning Bolt loses a lot of value when you're playing Infect, though. Normally, aggressive decks need to have one question in mind during deck development, "How quickly can I reduce my opponent's life total from 20 to 0?" Lightning Bolt is usually an easy 15%. Don't get me wrong; I'm not telling you to spew turn-one Lightning Bolts at your opponent's face, but when it's turn four or five. .. that face looks like a very nice target. I still felt like Lightning Bolt was worth the slot, even without this late game ability.

The first game I played with Lightning Bolt went as follows:

I proceeded to lose this game because my opponent had a 4-toughness creature that I could not burn down with a Lightning Bolt. I switched to Flame Slash immediately. The list I played with now had a lot of interesting tools at its disposal. Flame Slash would, in theory, help me get past blockers to connect face more often. I was playing the following list after some tweaking.


This list did shockingly well against everything except mono-red. It managed to steal a lot of turn-three wins and stole some spicy turn-four kills past Primeval Titan with Smoldering Spires. Flame Slash seemed good, but I was often frustrated when I drew more than one or two copies. The best way to ensure you won't draw too many of a card is to play less of it. A friend suggested Assault Strobe and I practically fell off my chair because I felt so stupid.

"I guess I just forgot to play Berserk."

I immediately went back into deck-building mode and came up with the following list:


This list really did very well I'd like to share a few of the games I played with you guys, to give you an idea of how the deck plays out. 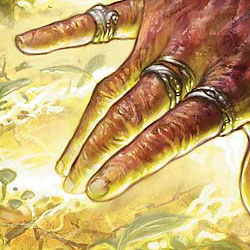 I drew another Forest, played it, cast Boar Umbra on my Blight Mamba and attacked for four poison counters. My opponent thought long and hard, eventually he decided to take the hit. My opponent cast another Overgrown Battlement, tapped the first for mana, cast Cultivate, and passed the turn. I Flame Slashed his blocker and attacked for lethal damage with a pump spell.

One of the best parts about the deck is how well it takes advantage of opponents that don't know how to play against it. It's often hard to imagine that a 1/1 infect creatures is going to kill you if you don't block.

The next game is my favorite thus far. 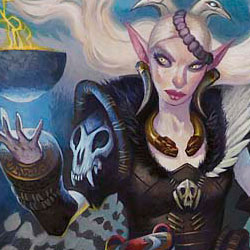 I drew Smoldering Spires, played it, prevented Fauna Shaman from blocking, cast Groundswell on my Blight Mamba, cast Assault Strobe on the Blight Mamba, and attacked for ten poison counters.

These games may seem crazy, but these are the types of things that can happen when you mulligan aggressively with this type of all-in deck. 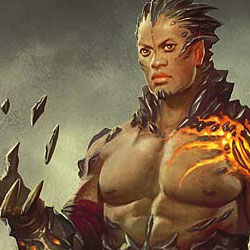 My opponent attempted a Burst Lightning on the Ichorclaw Myr on my end step, but I used Vines of Vastwood to give it shroud. My opponent thought for a bit and cast Koth of the Hammer, he untapped a Mountain, attacked for 6, and passed the turn. I drew an Assault Strobe and stole the game out from under my red opponent.

This last game is an interesting example of how you need to play when you're wielding an all-in style deck like this. Sometimes the only way to win is for your opponent to make mistakes. You need to put them in a situation where their mistake seems like it's probably the best play. Waiting a turn to play the two-drop ensures that my opponent will likely have a very strong spell they need to opt not to play if they want to burn the infect creature. Opponents in the know will likely make the right play, but most opponents have probably never had to face this type of strategy.

The deck loses the majority of games against mono-red. I used this game as an example of an opening you can use to steal the first game.

I continued to play games with this version of the deck and I was repeatedly impressed with its ability to steal games from the best decks in Standard. I still had a lot of trouble with red decks and I decided that I needed a good sideboard.

Unfortunately, sideboarding with this type of deck is very scary. It's hard to take cards out when you have such a focused strategy. The sideboard may look mismatched, but I'll explain my choices afterward. Here's the full 75 I would play today:


Here's how I sideboard in specific match-ups:

These sideboarding plans let you keep the deck's very straightforward plan intact. Your deck becomes slightly tweaked to have an edge in specific match-ups without actually changing the overall plan.

I said it last week, but I feel I should reiterate how important mulligans are when you're playing a deck like this. You absolutely need a two-drop in your opening hand. If your hand lacks one of the twelve two-drops in the deck then it probably needs to be shipped back. I would follow this rule all the way down to five cards, where I probably keep any combination of lands and spells.

The deck is an exciting rollercoaster for sure. There are many games where you feel helpless, but that is to be expected from such an aggressive deck.

I hope you all enjoy the virulent goodness of Infect Week here on magicthegathering.com. Next week I would like to try building a deck that uses Bloodchief Ascension to aggressively close games in a slowish Standard metagame. I'd love to hear your ideas in an email or on the forums.

Posted in Building on a Budget on November 3, 2010