Angels in the Fog

Last week I wrote about my second favorite card from Zendikar, Conqueror's Pledge. After another week of testing the White Weenie archetype I found that my list was missing a key card from the new set. Brave the Elements is a powerful answer to cards like Earthquake and Volcanic Fallout. Brave the Elements also serves as an excellent finisher or combat blowout against decks like Vampires. Here's the updated White Weenie list:

4 Brave the Elements 4 Path to Exile

4 Veteran Armorsmith 4 Honor of the Pure

White Weenie is a quick beatdown deck. This week I would like to look at the other end of the spectrum. My favorite card from Zendikar is, without any doubt, Luminarch Ascension. I've gotten to play with the card a few times, and I am sure that it is one of the best Turbo-Fog finishers ever printed (if not the best outright). I scoured Gatherer and put together a very powerful budget archetype. 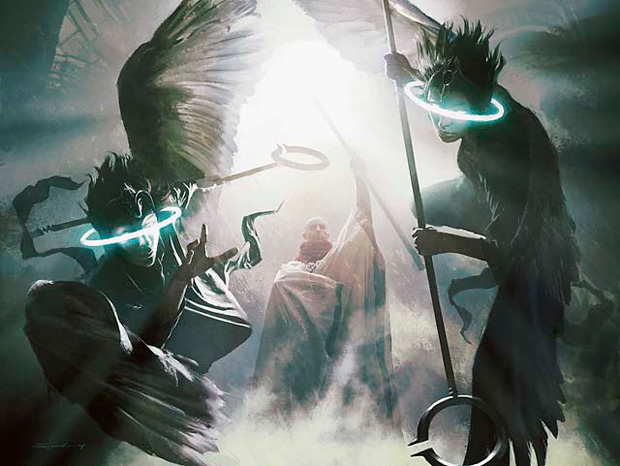 I have always been a big fan of Turbo-Fog. This type of deck punishes opponents who want to win a traditional game of attacking and blocking. The deck has an inherent weakness to decks with a lot of burn, but makes up for its bad matchups with nearly unloseable creature matchups. A format without Faeries seems like a very ripe place to unleash Turbo-Fog.

The first piece of any successful Turbo-Fog deck is Howling Mine. I want to supplement the card-drawing artifact with an additional two-sided card draw effect. Font of Mythos seemed like an obvious inclusion in this spot. Many people may be confused by these cards. Howling Mine and Font of Mythos are, in the abstract, not good cards. Your opponent gets to draw the extra cards first, and you spent a card to start the insanity. For either of these cards to warrant a place in your deck, you need to make sure you're abusing the effect more than your opponent. Decks that try to play more powerful spells than their opponent are not the answer here. If your deck devotes slots to Howling Mine and spends a turn to cast it, then you are already far behind. I do not care how powerful your spells are—you will not win most games under those conditions. For a card like Howling Mine or Font of Mythos to be an asset, your deck needs to attempt to change the way a game of Magic is played entirely. Turbo-Fog isn't looking to trump its opponent's cards; it seeks to completely invalidate them. Your opponent can draw and play as many creatures as he or she wishes, but no amount of creatures will be enough to kill you if you have a Fog effect waiting for them every turn.

After deciding on four Howling Mine and some number of Font of Mythos, I decided to check Gatherer for Fog effects in Standard. I was given the following list.

Angelsong: This seems like a very solid choice. If I'm playing against some type of control deck, I can probably just cycle this and try to get closer to my Luminarch Ascension. Two-mana Fogs are always welcome inclusions in this type of deck.

Safe Passage: Three mana is a lot to pay for a Fog, but given our options, we may need to play a card like this.

Tanglesap: I cannot think of many playable Standard creatures that trample right now. This is, essentially, another two-mana Fog.

After looking at those cards it becomes pretty clear that this deck is going to be green-white. I will round out the deck with some spot removal for the early game and Martial Coup for late-game defense.

4 Howling Mine 4 Font of Mythos

I really like the look of this deck list. Most of these cards are dirt cheap right now. Luminarch Ascension is the only likely exception, and there are only two of it in the deck.

I brought the new deck to a local card shop and played some games. 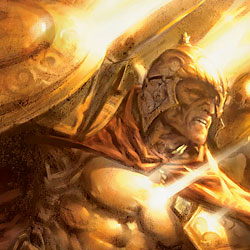 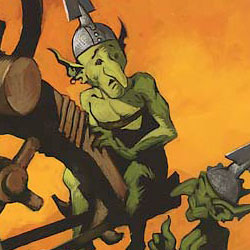 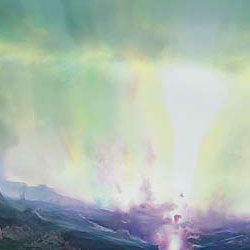 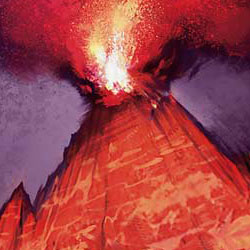 I win the roll and keep Kabira Crossroads, two Plains, two Howling Mine, Angelsong, and Safe Passage. I play Kabira Crossroads and pass the turn. My opponent plays Valakut, the Molten Pinacle and passes the turn. As soon as I see Valakut, I know the game is probably unwinnable. I draw Luminarch Ascension and cast it. My opponent casts Hellspark Elemental and attacks for 3. I draw a Forest, cast Howling Mine, and pass the turn. My opponent unearths his Hellspark Elemental and attacks for another 3. I draw a few more Fogs on my turn. My opponent casts a Lightning Bolt on my end step. On his turn, he goes for a Ball Lightning, but I have the Angelsong waiting. He has a Burst Lightning to stop my Ascension from getting counters, however. I try to stave off the burn, but I really don't have any answers to direct damage besides Safe Passage. Eventually he draws enough burn to finish me off. I never had a chance to get my Luminarch Ascension going.

In hindsight, I probably should not have played my Howling Mine. My best chance to win the game was to hide behind my Fog effects and hope to get my Ascension active before I die. I doubt I would have won the game regardless, though. 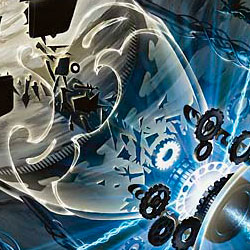 I lose the roll and keep Plains, two Forests, Luminarch Ascension, and some Fogs. My opponent casts a Borderpost and passes. I draw a Graypelt Refuge, play it, and pass the turn. My opponent casts Kaleidostone. I draw another Forest and cast my Luminarch Ascension. My opponent casts another Borderpost and a Howling Mine. The game becomes pretty awkward at this point. I can't ever tap out because I need to keep open my Fog mana in case his combo goes off. I can use his end step to start making Angels eventually, though. The turn before I attempt to attack him for lethal damage, he decides to go off. He takes a few extra turns and draws almost the entirety of his deck. He activates the ultimate ability on his Tezzeret the Seeker and attacks with enough artifacts to end the game. I try my first Fog effect, but he has a Negate. I try the second, and he has another Negate. I try my third Fog, but he has a Mindbreak Trap. After the game I asked about the inclusion of the Mindbreak Trap. He said it was necessary for the final turn. I'm still not sure I like it over a third Negate, but he gladly shipped his Time Sieve list.

Here's the Time Sieve deck I lost to:

The Turbo-Fog deck may not have performed as well as I had hoped, but I still feel it has a good amount of power. In the Jund matchup, they really need to draw more than one Maelstrom Pulse in the early turns of the game. The Burn and Time Sieve matchups will be extremely hard no matter what we do. This still seems like a very solid choice if your local shop has a lot of White Weenie, Jund, and Vampire players. I'm happy with the way the deck turned out. I don't particularly like the Journey to Nowhere. and I would probably replace any copies I could with Day of Judgement. I think this deck may benefit from a blue splash for a play set of Negate also. Perhaps the deck can eschew Luminarch Ascension altogether in favor of a plan to mill the opponent with Font of Mythos and Howling Mine.