Share Article
Share Tweet Share
everyone, and welcome back to Building on a Budget. Today's column is a continuation of the mega-series of articles dealing with Battle of Wits. Yes, Battle of Wits—a card so powerful that they had to ban it in Prismatic!

(Okay, granted, it would be problematic in a format that mandates 250 card decks—but I'll take my moral victories where I can get them!)

Before we get started, let me remind everyone of the ground rules for building a budget Battle of Wits deck:

To be honest, there weren't many Planar Chaos cards that would be good additions to the Battle of Wits deck—most of the black and blue uncommons and commons in the set are not silver bullets or card drawing / tutoring spells. Rather than make this a pretty boring article in which I add a single copy of Piracy Charm to the deck, I decided to revamp the deck by adding green.

This is a project I've been toying with for a couple of revisions, but now seems to be the best time to move forward. Adding green to the deck covers a couple of glaring weaknesses I've found with the deck in the past, namely removing enchantments, artifacts, and flyers.

Green also allows for a more stable acceleration base. Part of the goal of the deck is to drop a Signet on the second turn, but often the color of the Signet is pretty irrelevant to the deck—for instance, here's the version we left off with from Time Spiral:

The deck doesn't run any white cards, yet there's Azorius Signet, as a generic "accelerate blue mana" card. Green has plenty of early accelerators that can get the specific color of mana you need, while also providing a shuffle effect to things such as Sage of Epityr or Telling Time.

First, let's get a new mana base in the deck:

First, I added the Golgari Signet because it's on-color for both ends. Then, I put in copies of each of the green/X bouncelands from Ravnica block. Last, I put in Forests and the three best green mana-acceleration sorceries in Stanard.

Adding green also allows me to up the quality of certain removal spells. For instance, Putrefy is almost universally better than Dark Banishing, so I want to add in a card which can remove both artifacts and creatures, rather than just creatures.

Out: 3 Dark Banishing
In: 3 Putrefy

Speaking of silver bullets, this deck runs on the strategy that, if you're running a 240-250 card deck with a ton of tutoring and transmute effects, you should be able to have at least one answer to any given situation somewhere in your deck. This time around, I've added Putrefy already (to answer artifacts). In addition, I'm putting in copies of Krosan Grip and Naturalize (for Muddle the Mixture / Dimir Infiltrator and Drift of Phantasms to tutor for), plus Needle Storm (in case I face down a bunch of flyers, which has happened in the past) and a single Ana Battlemage, as a tutorable body / discard spell.

To make room for them in the deck, I took out four Perilous Research (the weakest card-drawing spell), three Repeals, and a Boomerang. The bounce spells were there to half-cover the deficiency in removing non-creature threats, and now that I'm packing both Naturalize and Krosan Grip, we should be set there.

Game 1: Vantere (R/G Pandemonium)
He gets a couple of early creatures and drops Pandemonium, and then Primal Forcemage. I Slay the Forcemage and use Mystical Teachings to get Naturalize. Then, I get double Nekrataal going with Grim Harvest, tutor up a hand full of bounce for a suspended Greater Gargadon, and slowly build my mana with Farseek, Search for Tomorrow and Signets. Finally, with a hand full of removal and bounce, I get Battle of Wits and win.
Record: 1-0

Game 2: Snort71 (Battle of Wits)
He gets stuck on three mana and Boomerangs one of my bounce lands. I just keep dropping lands, and when he taps out to play Strangling Soot on my Sage of Epityr, I drop Battle of Wits and win.
Record: 2-0

Game 3: Razzorrat (R/W Pyrohemia)
He drops down Guardian of the Guildpact and Seal of Fire. I get Farseek, Rampant Growth, Golgari Signet and Search for Tomorrow by turn four. I also drop Dimir Infiltrator to block his 2/3 guy, but he uses Seething Song to get out Pyrohemia and uses that to kill my board. I Mystical Teachings for Putrefy to kill his Guardian, which, in turn, kills his Pyrohemia. He passes the turn, and I flash back the Teachings to get Clutch of the Undercity and transmute that into Diabolic Tutor, which fetches Battle of Wits to finish the game.
Record: 3-0 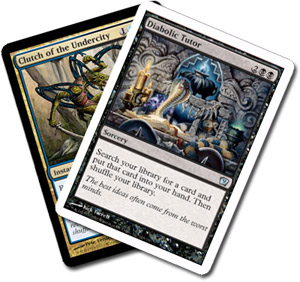 Game 4: Coccobill (G/B Aggro)
He gets an early Penumbra Spider and Putrefies a Looter il-Kor. I get another Looter, and drop both Dimir House Guard and Dimir Infiltrator to stop his guy. He plays Llanowar Elves and I strip the rest of his hand with Consult the Necrosages, including a Krosan Grip. He plays Gravedigger and Golgari Brownscale, and I set up my board to get Battle of Wits via the transmute / Diabolic Tutor route, with Strangling Soot in hand just in case.
Record: 4-0

Game 5: Nitz007 (R/W Slivers)
He gets triple Two-Headed Sliver with Sinew Sliver. I nearly stabilize, but I die to a second Rift Bolt at 2 life after locking up the board with Thought Courier, Nekrataal, and Drift of Phantasms.
Record: 4-1

All right, it's time for me to grouse again—there really needs to be an uncommon black board sweeper somewhere in Standard. Right now, you need to play red in order to remove weenies en masse in anything less than the rare slot (Pyroclasm, Sulfurous Blast), so this deck still has a weakness against a rush of smaller creatures. I miss the days of Infest and Hideous Laughter.

Well, since we're playing green, we have one sort-of removal spell (Rolling Spoil, which also gives the deck a way to kill a land, if need be). I can also add in life gain, so that I can buy a turn or two if I'm low on life. The cards I want for this slot are Natural Spring (a great one-shot lifegain effect) and Sophic Centaur. I often have a lot of cards in hand, and Sophic Centaur seems like it can make a huge difference if left unchecked.

Game 6: (Mono-Red)
He gets Keldon Halberdiers and Foriysian Totem and Greater Forgeling. I take them out with Putrefy, Sudden Death and Last Gasp. I then use Think Twice and Thought Courier to draw through my deck, eventually getting Battle of Wits. His board at the end of the game? Double Fortune Thief.
Record: 5-1

Game 7: Gary Peh (R/U/B Storm)
He tries to go off, and I counter a Seething Song. That keeps him from Demonfiring me to death, but he gets me down to six with Demonfire, Char and Grapeshot. I begin mounting a comeback, culminating in drawing a Natural Spring with four mana up. He plays Demonfire for 6 the next turn, killing me.
Record: 5-2

The only ways to stop storm are Stifle, Voidslime and Trickbind right now, so it's a wash.

Game 8: (G/W Aggro)
He gets Vinelasher Kudzu, Birds of Paradise, and Yavimaya Dryad within the first four turns. I get a Signet and Battle of Wits on turn four, ending the game.
Record: 6-2

Game 9: Gdepa624 (R/U Izzet)
I draw a ton of lands during this game. He gets me down to four with Leyline of Lightning and double Gelectrode, but I take care of them with Naturalize and Rolling Spoil. I then tap out to transmute and cast Battle of Wits, only to walk into Mana Leak. I draw lands and card drawing spells the next few turns, and eventually he gets Niv-Mizzet and kills me.
Record: 6-3

Over the past few games, I've been stuck with a ton of lands, and not enough action. The addition of eight more Ravnica-Block bouncelands has probably pushed my land count over the top, so I can afford to lose a few lands in favor of spells. Out go two copies of Swamp, Island and Forest, and in come three Dizzy Spells (to allow me to transmute for one-drop answers), Piracy Charm (works with Dizzy Spell!), Molder (what'd I just say?), and a copy of Macabre Waltz—a way to get multiple creatures back at once that I lost when Death Denied rotated out of Standard.

Game 11: Chaem (Slivers)
He gets the Dormant Sliver / Darkheart Sliver build, and I don't have any sort of mass-removal that can take care of multiple Slivers at once.
Record: 6-5

Game 12: DragonRyderX (B/G/R Mana Generation)
I kill double Magus of the Coffers, Nightmare Void a Roiling Horror from his hands, and kill him by transmuting Brainspoil into Battle of Wits.
Record: 7-5

Game 13: Rukland (Saprolings)
I get a turn-five kill with Battle of Wits.
8-5

Game 14: Cruzader (Mono-Green)
He gets stuck at one land, and after I Last Gasp his Llanowar Elves and drop a Thieving Magpie, he concedes.
Record: 9-5

Game 15: ZOGO (B/W/G Control)
I get a second-turn Signet, and he Naturalizes it. I cast Nightmare Void on turn five, see he has no enchantment removal in hand, and then play Battle of Wits on turn six. He doesn't draw a Mortify or another Naturalize, and I win.
Record: 10-5

Once again, a very respectable record pulled with this deck. I really recommend building this (or some version) of Battle of Wits if you play Magic Online. Battle of Wits really takes advantage of the online format, since you don't have to sit there shuffling a monstrous deck after every game or tutoring effect. Battle of Wits is a great test of deckbuilding. Unlike an ordinary deck, where you're tuning to get the tightest draw possible within a sixty-card limit, Battle of Wits makes you fit in a ton of extra cards for the benefit of playing a card that says "

: You win the game." This gives you an opportunity to play niche cards, fringe cards, pet cards, and fun cards, ones that you normally wouldn't be able to jam into a tuned deck.

If you have suggestions for this build of Battle of Wits, or ideas of which cards should be added come Future Sight, please chime in on the forums! I have a feeling that we're going to ratchet up from three to four colors come the next build...

And before I go for the week, here's some poll results from last week. Thank you all again for joining me, and I'll see you in seven!