Back when I first started this column, I decided that I'd have an overarching deck evolution revolving around Battle of Wits. You can find the original column here. It's time to get down to business and change around some cards in the deck for some Coldsnap fun! Before we do so, let me go back over the rules of this very special, 250-card episode of Blossom:

This is the version of Battle of Wits pre-Coldsnap. I'm sorry to report that Coldsnap adds very little to this deck. However, I can make a philosophy change to the deck, and that will be a pretty major overhaul.

Right now, the deck focuses on mana acceleration (Signets) and card drawing/tutoring (Transmute, Thieving Magpie) to the exclusion of utility. You'd think that in a 244-card deck I'd run a lot of one-ofs in order to have a ton of interesting tutor targets. Not so much. In the Coldsnap build of Battle of Wits, I want to change the focus of the deck from blind card-drawing to a more focused silver-bullet strategy.

All of these are cards that I wouldn't probably consider running in regular constructed decks, so out they go. Here are the transmute spells I'm currently playing in the deck:

In: 4 Muddle the Mixture, 4 Drift of Phantasms, 4 Dimir Infiltrator

That gives me twelve more cards to swirl around for my tutoring pleasure. To add to the mana base, I want to add in four Frost Marsh, since this is a Blue/Black deck. Coldsteel Heart seems strictly better than Spectral Searchlight for the needs of this deck, so it's a one-for-one swap.

Perilous Research seems like a great way to get rid of those extra Signets I might draw in a mid-range game, so I want to try those out as well. 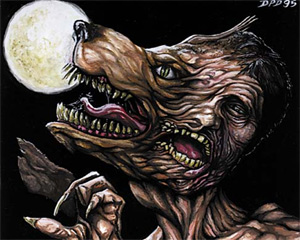 That leaves me with twelve slots for silver bullet cards. For those not familiar with the term, silver bullet refers to the one “Magic” bullet that will slay werewolves. In Magic, it means having a one-of copy of a card in your deck so that you can tutor it up to deal with any specific threat that comes your way. I want my silver bullets to be two, three, four or five mana (to correspond with my transmute targets), common or uncommon, and black, blue, or artifact. In the end, I decide to try the following:

1 Befoul (against lands I need to kill)
1 Boomerang (in case I need a quick bounce spell)
1 Death Denied (to return dead/transmute-used creatures)
1 Eradicate (against creature-light decks that have few kill conditions)
1 Execute (against white)
1 Hideous Laughter (board sweeper)
1 Nezumi Graverobber (against dredge)
1 Nightmare Void (against permission decks)
1 Quash (see Eradicate, except for spells, e.g. Warp World.dec)
1 Slay (against green)
1 Train of Thought (back in, for long games where I have lots of mana open)

So, how did the deck do? You'll have to wait until next week to find out. For the rest of this week's column, I'd like to talk about the column itself.

What does it mean to write Building on a Budget?

The forum responses to last week's article left me completely baffled. After three weeks of failing to get my Beacon of Immortality/False Cure deck up and running, I decided I'd kill three birds with one stone: play an aggressive deck, bring the column back to Standard, and dial back the budget two notches. No sooner did my column go up than posts such as this appeared in the forums:

“So, um, you won because you run 12 counterspells. In the casual room. Well done! Need a cookie?

There is a common scourge among red decks, called "Cheese"; basically a non-interactive deck that consists entirely of burn aimed at the opponent's face. Few people like playing against such decks. For reference you are playing the blue version; "Blue Cheese". Any idea why we don't care about your results and why people conceded? Why didn't you just play land destruction instead? Your results would not have been much different, I'm sure.

As such, your win condition is irrelevant; you could have splashed black and won with Howling Mines and Underworld Dreams instead of little blue men, though I guess that would break your budget. I would stop being so proud of my 13-3 record, were I you.”

Compare this with the boards from my Azorius Ascendant articles:

“I personally would like to see more permission in this deck. Remand, Mana Leak, Rewind, etc.. I'm one of those guys that likes to counter lots and lots of spells. :p”

“keep it short and simple, here's the math:
+4 somekind of counter spells (your choice)
-4 creatures (again, your choice)
= Rock On”

I think a lot of confusion over the nature of this column comes from the lack of a blurb at the beginning of each week's article. Starting next week, there will be a sidebar to each Building on a Budget, and it will say the following:

That's it – those are the rules. You'll notice there isn't a rule about what archetypes I'll play (I'll try building anything if it's worth building), how many of a certain type of spell I'll run (I can run anywhere from zero to sixty Counterspells in my Blue decks, though I don't hold out hope that a deck with sixty Counterspells and zero land will win much), or which wacky ideas I'll try next.

The Blue Snow Aggro column was the most divisive column I've ever written for this site. I've included a poll at the end of this column to see if it was as polarizing as I envisioned, because you never know if all you're hearing is the vocal minority, or if one person speaking represents nineteen people who don't.

The problem with the feedback from last week's column was that it was extremely contradictory. The following sentiments were expressed, via e-mail and via the forums:

“I hate Counterspells and I hate Counterspell decks.”
“I'm glad you finally built a blue deck with a lot of Counterspells.”
“This deck was unoriginal and something anyone could have built.”
“I've tried to get this type of deck to work for months, but you're the first person I've seen have success with it.”
“This is a budget deck.”
“This isn't a budget deck, because of the Snow-Covered lands.”
“You build too many combo decks”
“You build too many non-combo decks.”

My goal is to build viable decks, and teach you how to build them and why they work. I want my finished product to be representative of an effort that moves towards winning decks. Anyone can throw a random assortment of sixty cards onto a sheet of paper, and say it's a budget deck. I want to build a deck, go over the choices of the cards I use (and don't use), show you how the deck plays out, and explain why certain changes need to be made to the deck.

I am not here to build pauper decks. I am not here to build decks with zero rares. I have a clearly stated budget (thirty tickets) which I have hit a grand total of once in six months. Most decks end up in the 10 to 15 ticket range, which is half of my ceiling. It is a challenge to build decks that can win consistently, and it is more of a challenge to build decks that can win consistently with a budget constraint. I draw the line at the thirty ticket limit. If this means I can build a deck on Magic Online that has forty rares but still runs only twenty tickets (a lot of rares can be had at two for a ticket), then I'm going to build that deck. That is no different than building a deck with four uncommons that cost five tickets a piece, or twenty commons that cost one ticket each.

I will do my best to interject variety and creativity into my decks and columns. I have made an effort to shift from format to format, color to color, and archetype to archetype between builds. Different people enjoy playing different styles of decks, and I appreciate that fact. I enjoy playing different styles of decks! I had just as many people asking me to build a deck with 12+ Counterspells as I did people telling me they hated the fact that I built a deck with 12+ Counterspells. Regardless, you can be assured that whatever you see from me with one build, you'll see something entirely different the next.

I appreciate the heck out of all of my readers, and I read every single e-mail and forum post I get from you guys. For one-week-long articles, I am completely unable to incorporate any reader suggestions (such as Blue Snow Aggro last week). Once the article is written, I don't even see any feedback until a few days later. I have taken (and attributed) several suggestions on multi-part articles and will continue to do so. 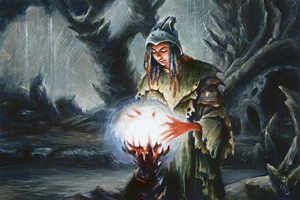 Please have consideration for your fellow readers. Not everyone will agree with all things said by myself or by other forum dwellers. It is fine to disagree – but do so in a respectful manner. Please realize that not everyone will like every deck, color or strategy, just as you do not like every deck, color or strategy. For every person who like Blue Snow Aggro, there's someone who would rather see a Battle of Wits deck in action – and vice versa. Even if you don't like a particular deck, learn from it – learn how to beat it, learn why certain choices were made, or pick out a single card from the deck that, taken out of the context of that deck, you'd like to build around.

In closing, I'd like to say “thank you” to everyone who reads Building on a Budget week in and week out. I appreciate the privilege I have of writing for the largest Magic audience on the planet here at magicthegathering.com, and I feel happy with the efforts I've made on this column in my first half-year of writing.