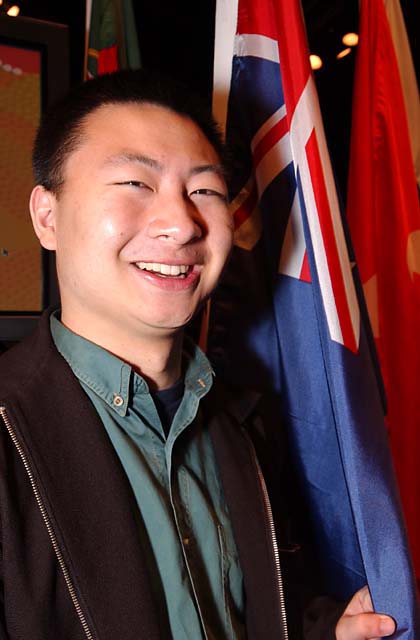 Ben 'TBS' Seck, Worlds ‘02 Spirit Week...the week where everyone gets to talk about Spirits.

Except me. You see, since this column caters to Magic Online audiences there are just not enough Spirits for me to work with to make any sort of cool deck. Fear not! Just because we can't play with Spirits doesn't mean that we can't have fun! (And once Champions hits Magic Online, look out!)

This week I am going to talk about another combo deck. This deck has been floating around for a while with good results. While I label it a combo deck, it doesn't combo in the traditional sense of the word. You see, this deck “goes off” one little bit at a time, gaining card and board advantage until it just overwhelms your opponent.

How do you do that? Why, with lots of little green men, of course! It always comes down to the green men!

The deck I am talking about is the Beacon of Creation/Blasting Station/Fecundity deck, which I will call Beacon Blaster, even though I am sure it has been named several other things.

“The Ben Seck” played this version in the Magic Online Worlds qualifier tournament to a high finish:

Now obviously this is no budget deck, but look at how the deck works. It wins by casting Beacon of Creation and then using Blasting Station and Fecundity to turn those little guys into “deal 1 damage and draw a card”, essentially making the Beacon of Creation into a

casting cost spell that typically deals at least 4 damage and draws 4 cards. This is a great example of what synergy between cards can yield – effects far more powerful than what the individual cards can give you alone.

This deck has 2 main elements – business spells and mana production. This is a good basis for the deck, but I feel that the equation is lacking something very important: Card drawing to search up your business spells. Now, Fecundity alone can draw you a few cards, but it is not your best option. You see, you aren't so much concerned with drawing extra cards as you are finding particular ones…thus effects like Scry are very powerful in this deck.

However, what I propose to use is something far more crafty…

The Puzzle Box has some remarkable qualities. First, it really helps you find any particular spell over the course of a game. Second, it gives you a use for that excess land that you have in your hand, since you used your mana accelerators to build your mana base earlier in the game. Third…it's cheap! Good times for the budget mage.

Thus I present to you Budget Beacon Blaster! The Beacons are 4 tix a pop, but fear not, the rest of the deck is rather tame.

Building on a Budget: Beacon Blaster (about 30 tickets)

Notice my second card drawing spell, Collective Unconscious. These are pretty cheap to pick up at 1 ticket a piece, and they really help you when you have your Beacon, but not Fecundity or Blasting Station. You still have a lot of mana accelerators in the form of Wood Elves, Vine Trellis, and Rampant Growth. Sure, they're no Birds of Paradise and Solemn Simulacrum, but it won't cost you your virtual deck box either.

This deck plays out by trying to block attackers as much as possible. You need time to set up your precious combo, and it won't come cheap. You will probably have to toss your Wood Elves or even a Vine Trellis in front of some nasty attackers. However, once you get Fecundity out, you will be rewarded by a bonus card for each chump block you make. Get down a Beacon of Creation or a Puzzle box as fast as you can. Don't worry about getting extra lands out to pump your Beacon…you will get more off of the second time you cast it. Just use the first Beacon to buy time to really set up and start using those tokens for some savagery. Note that Teferi's Puzzle Box will help you re-draw your Beacons once they go back into your deck. All of your land thinning will really help the Puzzle Box work its magic.

Once you get the full-blown combo of all three pieces (Beacon/Station/Fecundity), then start going to town. Kill all of their creatures and draw a fistful of cards, finding another Beacon. Then cast it and go to town all over again. Your opponent won't last long under those conditions.

There is another cool trick this deck has up its sleeve, which is Echoing Courage. Note that if you Echoing Courage an insect from the Beacon, they all get +2/+2, creating a little Overrun. It is entirely possible to win simply by attacking with Beacon tokens and casting Echoing Courage for the win.

Tips on Playing the Deck

Adding Money to the Deck

Ok, you can take a page from Ben Seck and use Birds of Paradise and Solemn Simulacrum. Keep in mind that his deck is from a while ago, and the format has changed quite a bit. With access to Champions cards, I would certainly be playing with Sakura-Tribe Elder and Kodama's Reach. I would avoid splashing any extra colors since you want as many Forests as possible, but if you only played something like 1 Island and always fetched it up to cast better card drawing spells than Collective Unconscious that would be acceptable.

Until next time, may your Insects be…Deadly Insect.