ast week, I made a budget alternative to the powerful Dunkpod deck that went undefeated on the first day of Grand Prix Minneapolis. This powerful new archetype, designed by Leif Torgerson, approaches the Standard metagame from a unique angle. The deck has a lot of powerful synergy and it's likely to produce more impressive results in the coming weeks. Torgerson gave the deck to a few of his friends, one of whom won a qualifier on Friday night and another, Chris Schafer, managed to post a 9–0 finish in the first day of competition. 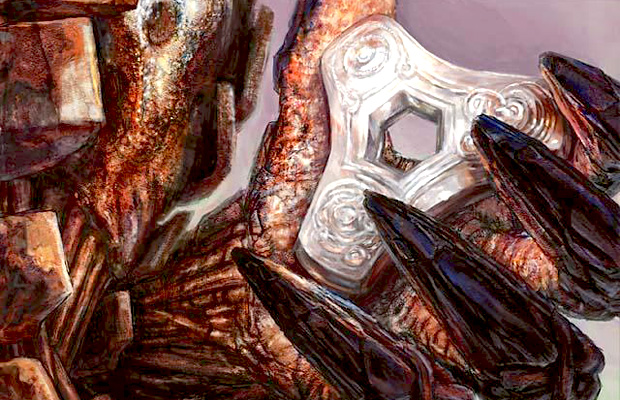 The more things change, the more things seem to stay the same. Two weekends ago, some crazy stuff happened. Christian Calcano managed to win Grand Prix Minneapolis with an innovative blue-red deck. Brad Nelson made the finals of the same tournament piloting a Grand Architect brew designed by Nick Spagnolo. This week, it seems like Standard is, once again, being put into a chokehold by White-Blue Delver decks. Luckily, Cavern of Souls gives decks like Humans and Ramp the necessary tools to punish Delver. I feel Delver no longer has the same unfair advantage that led to its dominance before the release of Avacyn Restored.

I suspect red-green decks—of the ramping and aggressive varieties—to enjoy great success this coming weekend. This will put Grand Architect into a good position again, but a lot of Architects might be scared off by Delver's success last weekend.

I decided to brainstorm a bit in hopes of finding forgotten cards that happen to be well-positioned in the current Standard metagame. Tumble Magnet jumped to mind immediately. Here are the things I'm scared of in the current Standard metagame: Wurmcoil Engine, Sword of War and Peace, Inferno Titan, and Primeval Titan. Tumble Magnet is very well positioned against all these cards.

Tumble Magnet needs some degree of proliferate in order to be successful. Unfortunately, cards like Contagion Clasp aren't quite as good as they once were. We're going to have to use cards like Tezzeret's Gambit in order to maintain counters on our Tumble Magnet. This type of proliferation isn't something we can maintain forever. This leaves us in an interesting spot: If an opponent ever untaps when we have no counters on a Tumble Magnet we're going to be at a huge disadvantage—we will have thrown away a card and our opponent's most impressive threat will be ready to take over the game. It's important that we don't use our Tumble Magnet counters frivolously. When deciding whether or not you're going to tap something with Tumble Magnet you should ask yourself a few questions:

We need to be frugal with our charge counters, but we still only have so many we're able to use. We're going to combat this problem by putting our opponent on a reasonable clock. It's okay if our Tumble Magnet runs out of counters if that pivotal point coincides with our opponent's life total being at or below 0. 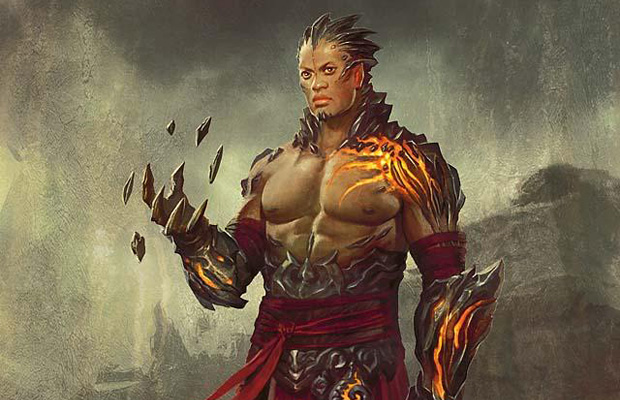 Koth of the Hammer | Art by Jason Chan

I'm already going to play Tezzeret's Gambit, so I'd like to see what cards benefit the greatest from a single instance of proliferate. The single best threat to proliferate once is Koth of the Hammer. Koth has become very easy to acquire these days. Duel Decks Venser vs. Koth put a lot of extra copies of the mythic rare into circulation. Koth fits particularly well into a red deck with a lot of sweepers and Tumble Magnets, and Tumble Magnet can be used to protect Koth of the Hammer. We can use Koth's +1 ability the turn it enters the battlefield and bash our opponent for 4 damage. The next turn, we can use Tezzeret's Gambit and activate Koth's ultimate. Tezzeret's Gambit is an interesting kind of Time Walk when we have the opportunity to use it this way.

I need a reliable win condition that has a strong damage output, evasion, and inevitability. I can't play enough threats to be sure I'm going to continue drawing threats if my opponent deals with the first one. Kuldotha Phoenix works perfectly. It attacks for 20% of our opponent's life total per swing and it has haste. Flying is basically unblockable against Red-Green Aggro, which will probably be the most successful deck next week. Perhaps the most important part of Kuldotha Phoenix is its metalcraft ability. Once the game starts to go long you will eventually reach metalcraft. Any opponent will have trouble dealing with Kuldotha Phoenix once we're able to reanimate it every turn without spending a card. This is a card I've thought about a lot recently. I want to work on a deck that uses Faithless Looting and Smallpox to discard Kuldotha Phoenix in the early stages of the game. Once I've achieved metalcraft I can start returning it to play. Hit the forums or shoot me an email if you would like to see this deck in the coming weeks.

Sphere of the Suns is going to be really good in our opening hands. Sphere of the Suns lets us cast Koth of the Hammer on the third turn. If we're lucky enough to have Tezzeret's Gambit as well, we might find ourselves with a Koth Emblem as early as the fourth turn.

Pillar of Flame is an excellent answer to Strangleroot Geist, a card that punishes red haphazardly. Board sweepers aren't very good when they make our opponent's threats bigger. It's nice to have a mix of board-sweeping effects and spot removal. We want Pillar or Flame for Strangleroot Geist and Whipflare or Slagstorm against Huntmaster of the Fells.

I want Pristine Talisman because it does everything I want to do in a deck like this. I can take some hits without having to use my Tumble Magnet counters, because I can always clean up with board sweepers and recoup lost life with Pristine Talisman. Pristine Talisman is also nice when you're bringing back Kuldotha Phoenix.

Sometimes, I like to include cards that are absurd in Limited just to see whether or not their power translates well to Constructed. I've never really had a chance to sleeve up Hoard-Smelter Dragon. I've only drawn it a few times, but I can't say I've been disappointed. In fact, the ability to kill Swords, Wurmcoils, Inkmoths, and Spheres is actually pretty good. Hoard-Smelter Dragon is a nice one-of to have when a deck makes a lot of mana.

Devil's Play is another great mana sink. When you've attacked, it's almost always a one-turn clock when you're casting Devil's Play and attacking with Kuldotha Phoenix on the same turn.

Contagion Engine seems like another great one-of. If a game goes long enough where I have trouble keeping counters on a Tumble Magnet, then Contagion Engine can surely lock up the game.

Here's the main deck I ended up with:

4 Sphere of the Suns 3 Whipflare

4 Tezzeret's Gambit 4 Koth of the Hammer

This matchup is weird. They want to be aggressive, but you can often take the wind out of their sails with an early Whipflare, Slagstorm, or well-timed Pillar of Flame. Pristine Talisman does a pretty good job of offsetting their poke. Kuldotha Phoenix and Hoard-Smelter Dragon are pretty bad here.

This is pretty straightforward. Our removal matches up well against their early game and our endgame crushes theirs. It's nice to be a deck that beats one of the most popular archetypes outright.

They've got the best endgame of anybody, so that can cause some real problems. Early Koth puts a lot of pressure on them and our ideal endgame in Games 2 and 3 involves Hoard-Smelter Dragon. They're going to take out Slagstorm, so we can bring in Precursor Golem and apply tremendous pressure.

They will copy our Phoenix or Dragon, so it's important we have a plan for that before it happens. We have Tumble Magnet for Wurmcoil Engine, but they often make an army of Wurmcoils. You can try to control this with Hoard-Smelter, but the best plan is just to race—they're pretty slow if you can kill Grand Architect.

Here's what the deck looks like when we give it a full sideboard:

A deck like this has a ton of potential to do well. Koth of the Hammer is extremely easy to acquire these days. The different angles available with this main deck and sideboard make it a nightmare for any opponent. A lot of people might lose to you if they sideboard cards like Timely Reinforcements because they're playing against red.

There are a lot of people who like a deck like this. It's quite strong and I'm sure you won't be disappointed if you sleeve this one up for FNM this weekend.

There are still a lot of directions we can go in the new Standard format. From Smallpox to Necrotic Ooze, with Lingering Souls all over. Be sure to hit the forums to talk about your favorite cards in Standard.