ew Phyrexia has brought combo back into the Standard spotlight. It seems impossible to pilot your way through an FNM these days without running into at least one copy of that pesky Splinter Twin deck—and Splinter Twin isn't the only new combo deck out there.

I've mentioned using Bloodchief Ascension with Mindcrank on a few separate occasions here. To me, this seems like it has the potential to be very strong if our opponents don't come well prepared. Looking at recent Standard lists, it doesn't look like many people are packing cards like Into the Roil or Kor Sanctifiers. This puts our Bloodchief Ascension deck into a pretty good spot. 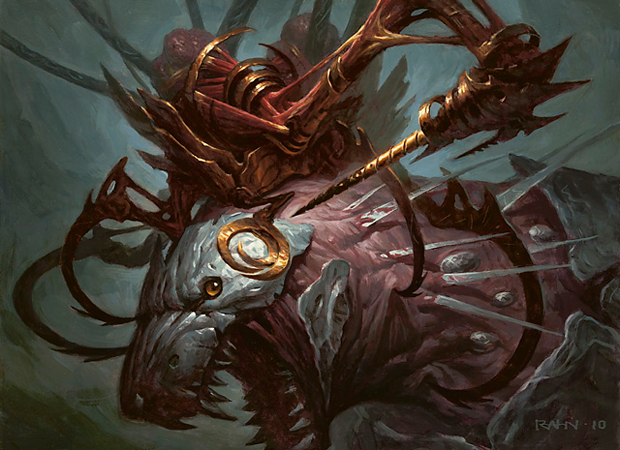 I'm not particularly thrilled with casting red cards in the new Standard if I'm not piloting a full-blown Pat Sullivan–style mono-red aggro deck; Batterskull is a huge problem and, thanks to Stoneforge Mystic, many opponents have access to it in almost every game. Fortunately, this deck has an effective answer to opponents that attain very high life totals. That answer is Mindcrank.

Mindcrank may look like a bad card—and in most cases it is—but I've certainly played worse in the name of achieving a combo. How does the combo work? If you have an active Bloodchief Ascension in play alongside Mindcrank, your opponent will lose his or her entire library the moment he or she takes any damage or has any cards go to the graveyard. Even something as mundane as casting a Preordain will take your opponents to meet their doom. Each time the Bloodchief Ascension trigger resolves, it will put more of the Mindcrank trigger on the stack. Each Mindcrank trigger will give you some Bloodchief triggers. It takes a lot of clicking if you're playing on Magic Online, but the RTS player inside of me can't help but think that's actually a good thing.

So we have a combo. Now we need to build a deck that's designed to successfully achieve our goal of activating an ascension. In the past we've seen Bloodchief Ascension decks that are packed with nothing but burn spells. Burn spells are the easiest way to activate our Ascension at a very early stage of the game.

I want to make sure we have some consistent sources of damage for the games where we have to use our burn spells to deal with our opponent's creatures. Bloodghast seems like the best fit here. Bloodghast provides a constant stream of aggression, and its landfall ability makes it very powerful against decks like Blue-Red-Green (RUG) and Valakut.

Manic Vandal is another 2-power creature that I'd like to play. This deck doesn't love seeing a Spellskite on the other side of the table, and Batterskull can be obnoxious if we're not going for a quick combo. I've resisted for a while now, but I think it's time to put this gentleman in your starting 60 cards if you're planning on fighting with a red deck.

I want to play a healthy dose of card draw too. I often see decks like this that try to get away with playing a pile of burn spells and a combo. But in addition to helping us find our combo, card draw is already very synergistic with burn spells. If your opponent uses all their interactive spells to prevent you from comboing out, then you can simply kill them with Bloodghasts and a hand full of burn.

Tezzeret's Gambit is exceptionally strong in this type of strategy. Not only do we get to draw two cards, but we get to charge our Bloodchief Ascension midturn. This gives the deck a new angle of attack that opponents may not expect. Stronger players may wait until you're about to go to three counters on your end step so they can bounce the Ascension with an Into the Roil. Having access to Tezzeret's Gambit forces your opponent to play a straightforward game.

Sign in Blood is another exceptional draw spell for this type of strategy. Most of the time you're just going to be drawing two cards, but Sign in Blood can be pretty sweet when you need that final burn spell to activate your ascension and mill your opponent out with a Mindcrank.

Let's talk about our burn!

Staggershock is staggeringly good in this type of strategy. For the low cost of three mana, you can kill two creatures, kill a single creature and put a counter on your Ascension, or just put a pair of counters on your Ascension. When you're not comboing an opponent, you can simply burn their face for 4 with the Staggershock.

Lightning Bolt is an obvious inclusion. I can also include a few copies of Burst Lightning if I want more than four one-mana burn spells.

Hideous End does very well as a removal spell that also charges up our Bloodchief Ascension. It's a shame it can't kill the Germ that Batterskull is usually attached to, but it's a very good card at taking down Squadron Hawks that have been equipped with Sword of War and Peace. A lot of opponents may think you're cold to a Sworded creature with protection from red and white. This gives the deck huge potential for blowouts.

Volt Charge continues the theme of burn spells that do a lot of work. Volt Charge is especially nice because it's an instant with proliferate. This makes your Bloodchief Ascension very unpredictable. (I'm starting to see a theme here.)

I played around with some lists and decided that I wanted a couple copies of Duress for cards like Gideon jura.

After some number crunching I arrived at the following list:

I decided to play some games with the deck to see how it fared against some of the more popular decks in the field. 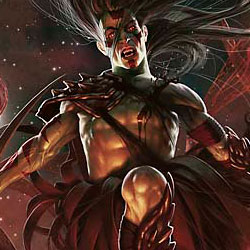 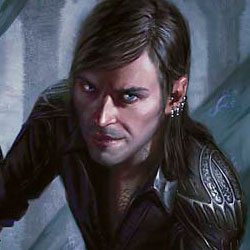 An interesting sidenote before I get into Game 2: Against a deck like Vampires I'd rather be on the draw. Against decks that pack Stoneforge Mystic you'd rather be on the play, you want to be able to hit the Stoneforge with your three mana removal spells if you need to, but against a deck like vampires it's nice to have the extra card when you're casting spells like Arc Trail and Staggershock in games two and three. 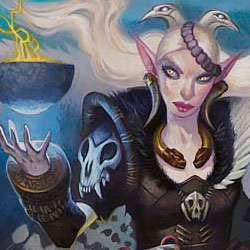 I drew an Akoum Refuge, played my Swamp, and passed the turn. My opponent cast an Elvish Archdruid and passed back. I cast Hideous End targeting the Archdruid at the end of his second main phase and put a counter on my Bloodchief Ascension. I drew duress, cast Staggershock on the Arbor Elf, and passed the turn. My opponent found a third land and cast another Elvish Archdruid. I rebounded the Staggershock to my opponent's face, cast Tezzeret's Gambit, putting my Ascension at two counters, I drew a Mountain and a Mindcrank. I played my Mountain and passed the turn, and my Ascension received a third counter on my end step. My opponent made a Vengevine and bashed me for four damage. I untapped, cast Mindcrank, and comboed him out.

I want to keep in the Manic Vandals because the Elf deck has been known to sideboard in Spellskites, Molten-Tail Masticore, Eldrazi Monument, and sometimes even a Batterskull or two. 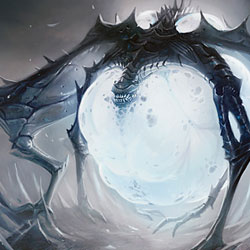 This deck fares very well against creature decks. The card draw spells really make this deck perform a lot better than many builds I've seen floating around on the internet. If you can get the dual lands then you should probably have a copy or two of Searing Blaze and some fetch lands to help get landfall triggers for your Bloodghasts and Searing Blazes. I wouldn't be against going down to two copies of Mindcrank, because they're pretty bad in your opening hand and you never really want to draw multiples. The deck is very capable of winning without them.

If you're looking for a budget combo deck that has the ability to compete in the new Standard then this may be the right list for you. Put the deck together—I'm sure you won't be disappointed.

Fellow Bloodchiefs should hit the forums or shoot me an email with questions or comments. I'd love to hear your feedback or get some exciting new deck ideas for Standard.