Posted in Building on a Budget on September 2, 2009

ello, and welcome to another edition of Building on a Budget. I received an avalanche of positive email regarding last week's column, and I hope to do another column on the same subject matter each time a new set is released. This week I'm going to explore a couple different decks that abuse an overlooked rare from Magic 2010.

Sanguine Bond is one of those cards that just demands to be played with. There are a bunch of different directions we could take with this deck and I'm looking forward to exploring each of those lists. 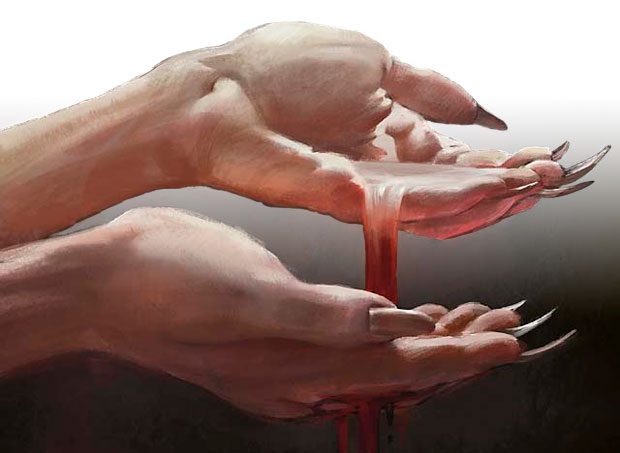 Sanguine Bond suffers one of the biggest drawbacks a Magic card can possess: it does not actually do anything by itself. If we're going to build a deck around the new rare, we need to make sure the rest of our deck makes the card worthwhile.

Another list that seems to be popular is a black-green-white deck that uses powerful cards like Kitchen Finks in conjunction with Captured Sunlight. These lists tend to differ a lot in card choices. Some lists are packing Behemoth Sledges and the like, while others have taken a more controlling route with Tainted Sigil and other lifegain spells. A sample list for this kind of deck would look like this:

People seemed to take one of these two routes when they built their Sanguine Bond decks. I myself thought one of the biggest puzzle pieces was missing from both these lists, though. A lot of you are aware of my undying love for Ranger of Eos. The white Mulldrifter seems especially well placed in a deck like this. Soul Warden is probably one of the best targets for our Ranger, and I'm fairly certain that a lot of casual decks would be shut down by this combination. I opened Gatherer and went on a quest for cards that could fit into my new creation. I'll begin our adventure with an explanation of each card that I found.

Sanguine Bond: This is the card I'm attempting to build a deck around. I want to make sure all the cards in my deck have a good amount of synergy with my big enchantment.

Soul Warden: Soul Warden is quite good on its own these days. It seems like a very nice answer to Bitterblossom, and (in combination with Sanguine Bond) it punishes our opponents when they play problem cards for us like Cloudgoat Ranger or Spectral Procession.

Ranger of Eos: Fetching up a pair of Soul Wardens seems like one of the most powerful things we can do with a deck like this. I wish there were more reasonable targets for the Ranger so I could play a fourth copy. Unfortunately, Nip Gwyllion just isn't exciting enough for me.

Kitchen Finks: This is just an incredible card. In addition to its stand-alone awesome factor, the Finks actually fits this deck very well. Kitchen Finks can cause an 8-point life swing before it ever enters combat if the game involves a Sanguine Bond hitting the table.

Tidehollow Sculler: I wanted a reasonable two-mana creature, and I was stumped for a bit. Knight of Meadowgrain seemed like the obvious choice, but a budget mana base couldn't reliably cast the Knight on turn two. I ended up going with Tidehollow Sculler. The card is extremely efficient and seems like an excellent dose of disruption in a deck that's trying to do as many zany things as this one.

Necromancer's Covenant: This card has gotten a lot of praise from the casual community since it was printed. It has a huge effect on the game. I usually find myself making at least five lifelink 2/2s every time I cast the spell. I decided this would be our late-game finisher.

Doom Blade: I want our deck to have a good amount of efficient removal. It's important that my opponent's graveyard is fat when I cast Necromancer's Covenant. I also want outs to gigantic bombs like Baneslayer Angel.

Wall of Reverence: Another great card that is currently underplayed. I remember testing this card before Pro Tour–Kyoto and essentially deciding that red decks could not exist because of its presence. Since then, however, we have had cards like Anathemancer and Lightning Bolt bring the color back. Wall of Reverence is still a card, and it seems like it fits perfectly into this deck.

Sign in Blood: This has got to be one of the cards to watch after the rotation. There doesn't really seem to be anything close to this in the card drawing department. Two mana for two cards is an incredibly solid deal. The fact that Sign in Blood can actually be used to finish off your opponent when they're on a low enough life total makes this card especially awesome.

Tendrils of Corruption: I understand that the deck doesn't maximize the amount of life it can gain with Tendrils, but that doesn't really matter. I've cast this card for 3 damage many times and been very happy. Its mana cost was clunky given our curve, but I wanted another spell that did something in this slot and thought Tendrils could be a good one- of.

Diabolic Tutor: This deck seems very dependant on certain cards for very specific situations. The deck doesn't have a silver bullet package, but I thought it might be wise to increase the consistency of the overall plan a bit by adding a Diabolic Tutor.

I chose to play Terramorphic Expanse because the deck doesn't have much it needs to do on the first turn. Plucking Expanse off the top can be obnoxious, but the deck has enough gaps in its curve that you should find a turn to play the expanse without it being a speed bump.

I brought the deck into the casual room and played a few games with it. 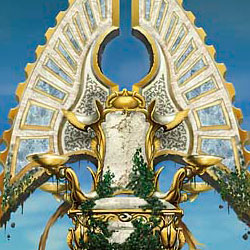 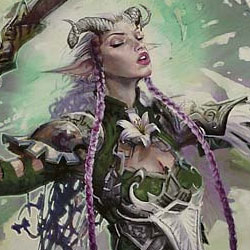 I lose the roll and keep Plains, Swamp, Swamp, Soul Warden, Ranger of Eos, and two copies of Sign in Blood. My opponent casts Nettle Sentinel and passes. I draw a Plains, cast my Soul Warden, and pass the turn back. My opponent attacks for 2 and casts Bramblewood Paragon. I go back to 19. I draw Tidehollow Sculler and cast it, and my opponent reveals Imperious Perfect, two copies of Giantbaiting, and some lands. I take the Perfect and pass. My opponent casts Giantbaiting with conspire and attacks me with both Giants and the Nettle Sentinel. I block the Nettle Sentinel with my Tidehollow Sculler and go to 12. I draw another Plains, play a Swamp, and cast Sign in Blood targeting myself. I draw Sanguine Bond and Wall of Reverence. My opponent casts Imperious Perfect and attacks for 3, putting me at 10.

I draw another Plains, cast my Ranger of Eos finding two more Soul Wardens, and pass. My opponent casts Boggart Ram-Gang and attacks, and I take the 4 damage and go to 8. On my turn I draw a Kitchen Finks, cast Soul Warden and Wall of Reverence, and pass, gaining 3 more on the pass and going to 14. My opponent makes an Elf Warrior token on my end of turn step. My opponent casts a Nettle Sentinel, attacks with his Ram-Gang, and passes. On my turn I cast Soul Warden and Kitchen Finks, and I now feel like my life total is probably getting out of reach for my opponent. The game becomes a game of him making tokens on my end of turn step and me gaining tons of life. I eventually stick the Sanguine Bond and start draining him. He even gets to cast Overrun and attack for well over 20 damage, but it's too late—the Soul Warden triplets take the game home. 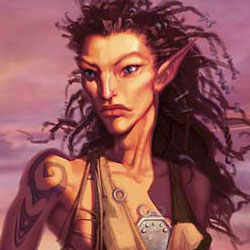 I'm glad I finally gave the Sanguine Bond deck a look. It seems like it could be a fun choice for my casual group in the future. Unfortunately, I don't think this archetype can be tournament worthy with the cards in todays standard.

Zendikar is fast approaching and I may be pleasantly surprised with a number of cards that fit this archetype. Until then, however, I think this deck should probably stick with the casual room.

Posted in Building on a Budget on September 2, 2009