elcome to another exciting week of previews here on DailyMTG.com! Today's preview card really shows off the depth of design space available for a mechanic like soulbond. Until now, most soulbond creatures strongly encourage their master to create a bond upon entering the battlefield.

For example, a card like Wolfir Silverheart essentially adds 4 points of hasty power to the table if you already have a creature in play. Tandem Lookout can replace itself if you have a creature that can make its way to your opponent's face unmolested. Silverblade Paladin grants double strike to your two-drop (ideally a Cloistered Youth or Porcelain Legionnaire). 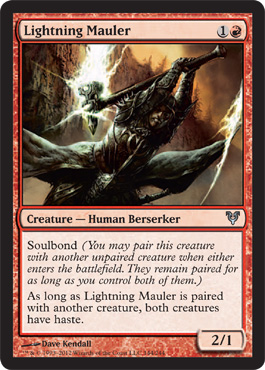 Sure, you can slam down Lightning Mauler after your one-drop and crash in for an extra 2 damage, but a 2/1 haste for

isn't exactly the cream of the crop in Constructed. To get full value out of Lightning Mauler, you'll want to wait for a particularly juicy sidekick to give haste. 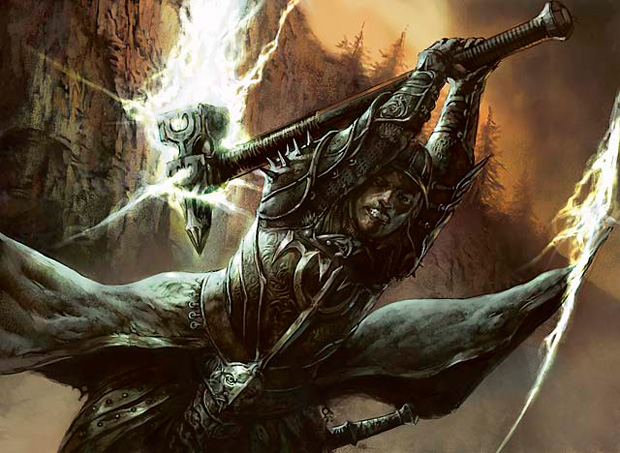 Wolfir Silverheart was previewed by Dave Humpherys on Monday. I can think of no better candidate to give haste in the post-Avacyn Restored Standard or Block formats. Think about it: If you already have Lightning Mauler unpaired on the battlefield, then Wolfir Silverheart adds 12 points of attacking damage to the table for five mana. All kinds of absurd... 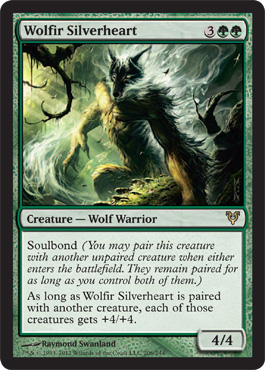 Lightning Mauler puts your opponent in interesting situations too. For example, if you have an unpaired Lightning Mauler on the battlefield, then it's very difficult for your opponent to gauge when it's safe to cast his or her Planeswalker. Even a Karn Liberated that goes +4 right away will be in danger of a hasty Wolfir Silverheart.

Lightning Mauler can also be used in fringe decks that desire a key combo piece to gain haste. For example, Pili-Pala and Grand Architect create infinite mana together, but this combo hasn't seen play because the Pili-Pala needs to stick around for a turn as a creature with 1 toughness that's also an artifact (i.e., there are a lot of cards that kill it). Lightning Mauler can grant Pili-Pala haste and effectively end the game immediately:

In Limited, Lightning Mauler will create situations that reward thoughtful players. To illustrate this concept, I'd like to share a story with you. 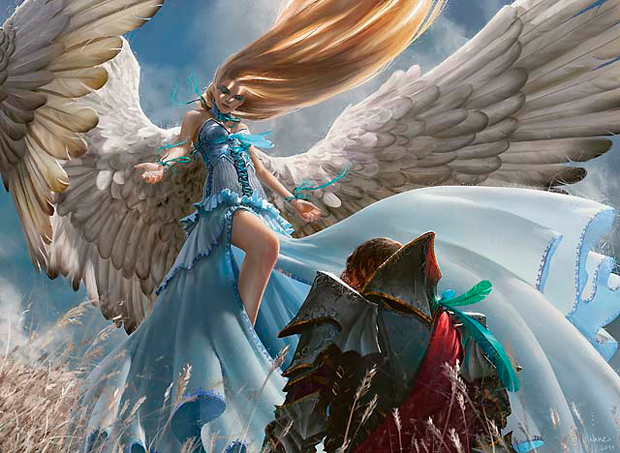 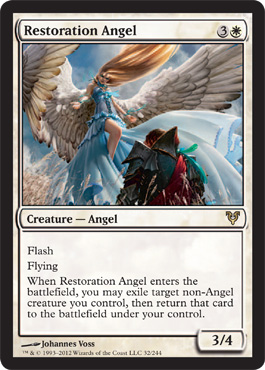 Flickering creatures has always been a fun Limited effect that encourages players to use creatures with enter-the-battlefield triggers. In Avacyn Restored, we can flicker soulbond creatures to renew bonds or create new ones altogether. The interaction between these two set themes is going to create a lot of exciting Limited matches.

In Standard, Lightning Mauler pairs well with Wolfir Silverheart and Pyreheart Wolf. Giving Pyreheart Wolf haste is a lot better than you might expect. In a lot of ways, it makes your team unblockable forever. That's not entirely true, but it's unlikely your opponents will still be alive by the time they're able to make any profitable blocks.

Wolfir Silverheart is especially good in a deck like this. Birds of Paradise can become a 4/5 flier in a pinch, dominating the skies and showing Insectile Aberration who's boss.

Hellrider lets a deck like this turn sideways with reckless abandon. If you're able to curve out into a Hellrider it's going to be difficult for any deck to race you.

We're going to want a lot of mana creatures because they're worth a lot of damage with Wolfir Silverheart and Hellrider and they help us cast our big spells earlier. Birds of Paradise is especially good here because it taps for red mana.

Strangleroot Geist and Phyrexian Metamorph will finish our creature base. Metamorph lets us get aggressive with an opponent's Swords and gives us a way to kill Geist of Saint Traft. Strangleroot Geist is extremely powerful for obvious reasons and will find itself in just about every RG aggro deck.

Brimstone Volley allows this deck to finish games out of nowhere. Its 5 damage is 25% of the game. It won't be difficult to turn on morbid when you're attacking with all your creatures every turn. 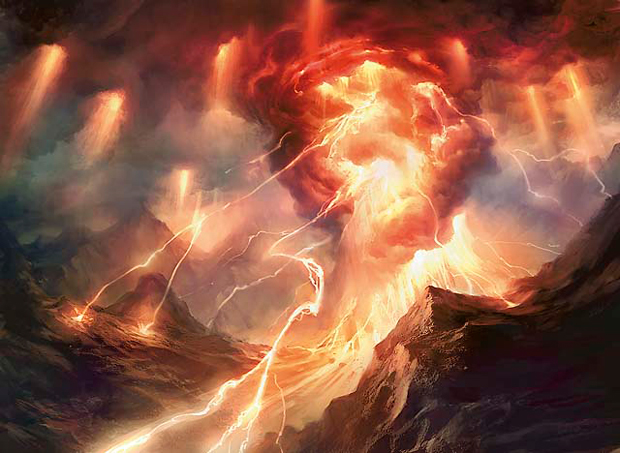 Speaking of 5 damage, I'd really like to only pay one mana to seal up 25% of the game. Lucky for me, Thunderous Wrath lets me kill people out of nowhere for the cheap cost of a single red mana. And even drawing Thunderous Wrath unprepared isn't the end of the world (I've paid kicker on Burst Lightning many times). The topdeck potential of Thunderous Wrath makes it worthwhile here. I'm looking forward to playing actual games with the miracle mechanic; it seems pretty crazy.

The Avacyn Restored Prerelease events are less than two weeks away. Be sure to look up an event so you can be one of the first people to play with the latest Magic: The Gathering expansion. Call ahead to find out if your location will have a Helvault event. These events are of limited availability and might require preregistration. Don't wait until the last minute to plan your Prerelease adventure!

I'm going to jump back into brewing for next week's column. I've received a lot of great feedback in the last few weeks and I'm looking forward to next week's piece. Be sure to shoot me an email or hit the forums with comments or suggestions for future column ideas.