ello, and welcome back to Building on a Budget. Last fall I started to work on a deck that was lovingly referred to as EDNAE (Eggs – Disclaimer: No Actual Eggs). I received a lot of feedback regarding that deck. There are a few people that have continued to work on this deck and routinely sent me their updated lists to ask for my opinion. Today I'd like to talk about a card from Alara Reborn that has not been getting as much love as I think it deserves. 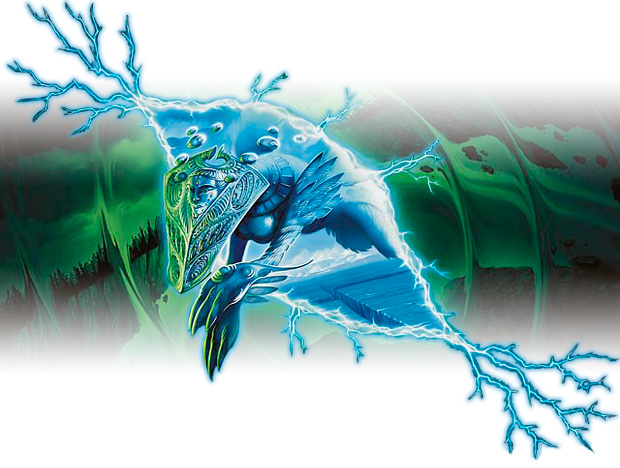 Wargate seems like a powerful tool to me. I was extremely surprised when I was able to trade for them at such a low price recently. For three mana you can tutor up any land (Cloudpost, Boseiju, Who Shelters All, Ghost Quarter, or any Urzatron piece) and put it directly into play. The prospect that really excites me is Lotus Bloom.

I foresee many turn-three kills in the very near future.

For those of you unfamiliar with the first EDNAE list:

2 Spoils of the Vault

I'll talk a little later about how the deck actually works. There were some problems with the initial list that should probably be addressed.

Manamorphose was not very good. The idea here was that I wanted more "free" cantrips. Unfortunately, Manamorphose was only really castable the turn we were attempting to go off. Gabe Carleton-Barnes recently mentioned Elsewhere Flask to me. That seems like a much better choice for this deck. Elsewhere Flask is always castable, and it actually pads our draws when we are trying to go off with a limited number of card draw effects.

The old version of the deck needed to draw a Reshape if it didn't suspend a Lotus Bloom on the first turn. Wargate makes this deck a lot more consistent. If I already have a pair of Lotus Blooms going I can use Wargate to go get another Ghost Quarter so I can properly thin my Library.

The old version was convoluted with a lot of maybes. Ponder and Manamorphose were the biggest culprits here. I don't hate ponder, but I think I want more information as to whether or not I should Mulligan a hand.

My current list is a result of a lot of trial and error:

1 Spoils of the Vault

I'll explain each of the card choices and then give a tutorial on how the deck should be played.

Ghost Quarter: This card is absolutely necessary. Once we start going off, Ghost Quarter actually starts netting us extra mana. It's also extremely important to thin our library. When I first started working on this deck I had 4 Seat of the Synod and 4 Ancient Den. I kept cutting the artifact lands one at a time, thinking they were somehow necessary because I was playing Reshape. Eventually, I came to realize that the artifact lands were unnecessary and caused the deck to fizzle far more often than I would like. Usually, when I start going off I don't play any land I draw until I draw a Ghost Quarter.

The basic lands: I wanted to include a single Forest and Plains for easy casting of Wargate.

Wargate: The first Wargate you draw serves as a Reshape, it finds your Lotus Bloom and allows you to go off with your Second Sunrise. After that, Wargate finds Ghost Quarters or card-drawing artifacts.

Reshape: Reshape is one of the key pieces to the combo. Putting Lotus Bloom directly into play is an important play. Once we start looping through the combo the Reshapes can find extra card-drawing artifacts and help us draw our library faster.

Lotus Bloom: I always found myself siding one of these out when I played four. Suspending a Lotus Bloom on any turn besides the first is usually just a waste of a card. Drawing Lotus Blooms while you're trying to sift through your library and find relevant spells is especially frustrating. I have been quite happy with three copies, but four may still be correct. I need more time and testing to decide which is the right number.

Elsewhere Flask: The Flask is a great new addition. It makes the deck a lot more consistent. We don't have to worry as much about getting artifacts into play to set up the combo.

The Spellbombs: These act as eggs and can be recycled with Second Sunrise to win the game once we draw our entire deck.

Ponder: I wish I knew a better card for this slot. For right now this is the best option we have here, though.

Reclaim: Reclaim really only targets the Second Sunrise. It's important that we maximize the number of Second Sunrises in our deck. We may be drawing twelve or thirteen cards at a time, but if we don't draw a Reclaim or Second Sunrise, we'll be fizzling and passing the turn with no permanents in play. We can also use Reclaim to make our opponent run out of cards after we gain infinite life with Sunbeam Spellbomb.

Last time around there were a lot of readers that were confused by the deck and didn't understand how it functioned. I'm going to try my best to clarify how the deck wins. 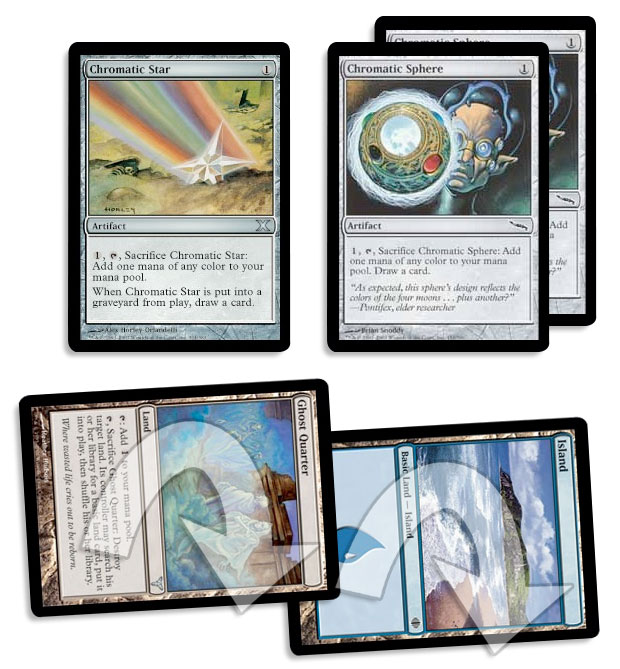 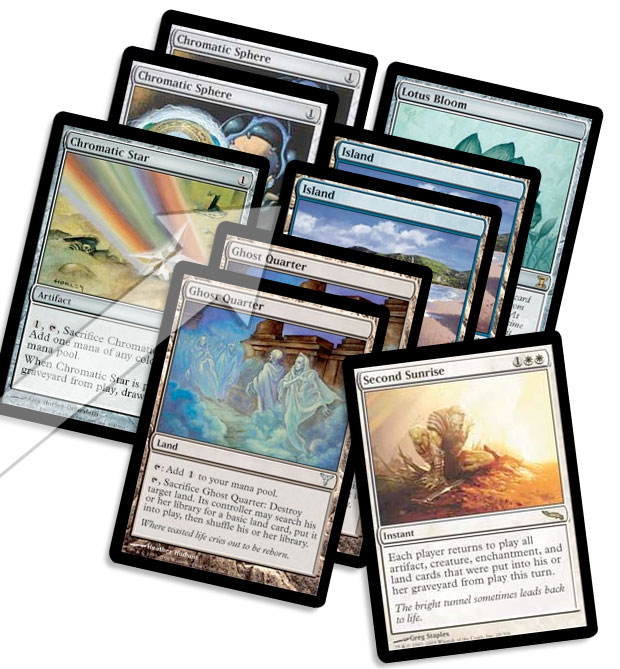 Once you've drawn your whole library, you can simply use your Pyrite Spellbomb to deal 2 damage to your opponent. Then sacrifice your Lotus Blooms for some red and white mana. Use Conjurer's Bauble to put a Second Sunrise on the bottom of your library (which is now also the top) and draw it. Then cast the Second Sunrise. Repeat this process as necessary to kill your opponent. You can use your Sunbeam Spellbomb to gain infinite life and then use Reclaim targeting Reclaim for the rest of the game to make your opponent run out of cards, if for some reason the Pyrite Spellbomb cannot finish them off (e.g., they have an Ivory Mask type effect or something else stopping you).

Zoo: Naya and Domain Zoo decks are going to have a lot of trouble beating you. You possess a very consistent turn three or four win, and it's up to them to find a draw that can race you. With the Onslaught fetchlands rotating out this fall, the Zoo decks we're used to will have to change quite a bit. 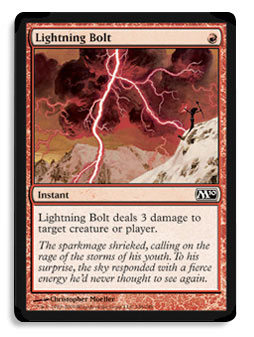 Faeries: Faeries is still the scourge of almost every budget concoction I make. It's hard to be creative and use offbeat cards to do strange things and still have a chance against the Fae.

Burn: This is very easy. Even with the second coming of Lightning Bolt, I don't see a Burn deck standing a chance against a combo deck that finishes the game on turn three.

Next Level Blue: Their threats are cast at sorcery speed, so there's a good chance we can beat a Next Level player on a turn that they tap out for a threat. Once they know what we're up to, they'll try to leave mana up for some counterspells. We have a pretty big advantage if they don't have a turn-two threat. We can simply play all of our artifacts and wait for an opportunity. Once we have enough in play, we can probably go off through at least one or two counters.

I'm not going to include any sample games because the process of going off doesn't make for a very good read. I hope you've enjoyed this re-visitation to one of my favorite Building on a Budget archetypes. If you're looking to add your own flair to the deck, I suggest experimenting with Time Sieve. As always, change the deck to your own liking.

A Quick Aside about the Rules Changes

I was worried when I first saw the impending rules changes, specifically the new combat rules. Initially, I was under the impression that they were dumbing things down. Fortunately for me, I've had a few chances to play with the new rules system and I can say with full honesty that the changes are definitely for the good of the game.

What I love most is the elimination of the "correct" play in combat. If I attack with my 5/5 and my opponent blocks with a 5/5 and I'm playing by the old rules, then there's only one play I can make with my pump spell: damage on the stack, play my pump spell, my 5/5 lives, your 5/5 dies. With the new rules there's a whole new element of strategy, and there is certainly no safe play.

I feel R&D opened a whole new world of mind games, and I'm excited to play with the new changes at a tournament level.