elcome to Burn Week here on Magicthegathering.com. The latest Premium Deck, Fire & Lightning is ready to hit the shelves this Friday. Fire & Lightning looks pretty awesome from a game play perspective and exceptionally exciting from a collector's perspective. A play set of foil Lightning Bolts is already well worth the purchase of Fire & Lightning. The foil copy of Fireblast can be traded for stacks of cardboard. 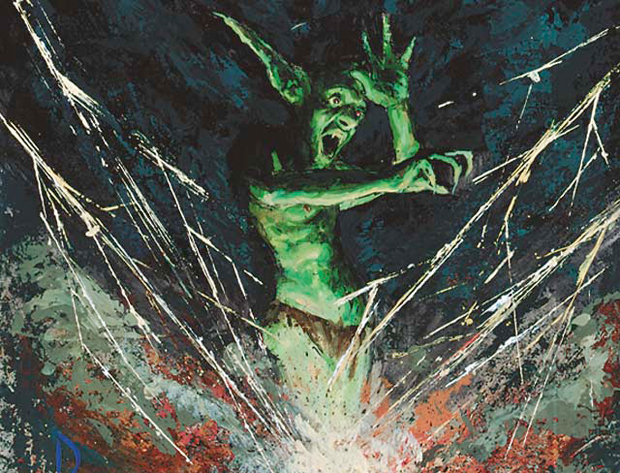 I set out to build a burn deck and did a quick Gatherer search of Standard legal burn spells. There's a lot to be said for cards like Galvanic Blast, Staggershock, Burst Lightning, and Lightning Bolt, but, in all honesty, a Standard legal burn deck needs Koth of the Hammer to be viable. One could construct a powerful Standard Goblin deck, though.

The idea didn't thrill me. This is Burn Week. What kind of author would I be if I tried to pass a random creature deck off as a true burn deck? I want to be aiming burn spells at my opponent's face when they're at 18. I decided that Extended might be a better world to explore. Extended is the format of the next Constructed Pro Tour Qualifiers (starting in January), and a lot of my readers have asked if I could write about it more often. Extended also offers up enough tools to make a dedicated burn deck quite exciting. 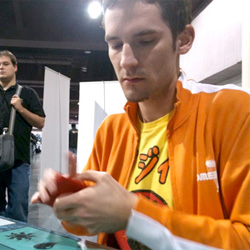 I wanted my burn deck to be exciting, though. It might be dull if I simply mashed all the best burn spells in Extended together and played a few games. It's hard to find innovation in the world of burn, but there's one fire mage that never fails to disappoint. Petr Brozek, a pro from the Czech Republic has done an excellent job riding lightning onto the gravy train.

Petr's most innovative design was the Boros deck he used to top 8 Grand Prix–Oakland earlier this year. Petr's deck list was so well received that the PTQ on Sunday at that very Grand Prix had over 30% of the players sporting the exact same 75.

Mr. Brozek had a powerful secret that he exposed to the world at Pro Tour–Amsterdam a few months back. Quest for Pure Flame was ignored by most of the community until Petr decided to pair it with cards like Needle Drop. Quest for Pure Flame almost guarantees that you will be able to dish out a lethal dose of burn by the fourth turn of the game. I'd like to take a quick look at Petr's list to see what all the fuss was about.


Petr's exact list isn't Extended legal anymore, but enough of the list remains intact for us to fill in the blanks. Petr chose to splash white for cards like War Priest of Thune, Ethersworn Canonist, and Angel's Grace out of the sideboard. Angel's Grace is the real selling point here and it rotated out of Extended with the release of Scars of Mirrodin. I could see arguments being made for a black or white addition out of the sideboard to deal with Kor Firewalker, but I think it's best for us to start off testing the deck as mono-red.

The main deck loses Keldon Marauders and Rift Bolt, but we can easily replace those two with Burst Lightning and Hellspark Elemental. The list builds itself from that point. Here's the list I decided to play with.


This is exactly what I want my Burn Week deck to look like. The deck devotes every slot to spells that are designed to do one thing: Reduce your opponent's life total from 20 to 0 as fast as possible.

I played a few games on Magic Online to get a feel for the deck. 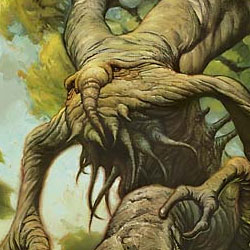 I drew a Mountain, played my land, cast Quest for Pure Flame, attacked for 1, put a counter on the quest, and passed the turn. My opponent played another fetch land, popped it, found a Swamp, and cast Doran, the Siege Tower. My opponent then attacked for 3, and passed the turn. During my opponent's end step I cast Lightning Bolt, putting another counter on my Quest for Pure Flame.

I drew another Mogg Fanatic, cast it, played my land, sacrificed both Mogg Fanatics to put some more counters on my Quest, sacrificed the Quest, and aimed a pair of Shard Volleys for a lethal 12 damage at my opponent's face.

The deck did precisely what it was designed to do that game. My opponent took 4 damage from lands, but was probably dead regardless. Any burn spell off the top of my deck would have been enough to finish it on the following turn and I could have used the Mogg Fanatics to block and shoot. 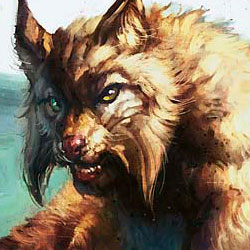 This win was a little harder, but the deck continued to do exactly what it was designed to. My opponent claimed to have a few copies of Kor Firewalker in the sideboard alongside a few Burrenton Forge-Tenders to fetch up with Ranger of Eos. Kor Firewalker is, admittedly, a huge problem for this deck. If you expect a lot of White Weenie decks in your Extended scene then I'd recommend splashing white or black for a removal spell that can hit the obnoxious protection from red beast. 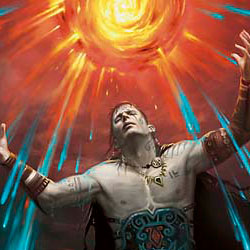 I drew a Lightning Bolt, unearthed Hellspark Elemental and attacked. My opponent cast a Doom Blade on the Hellspark, I made the Quest active and passed the turn. My opponent played a fourth land and passed the turn. I drew a Burst Lightning, entered my combat phase, my opponent cast Cryptic Command tapping all my creatures and bouncing my Quest for Pure Flame, I sacrificed the quest. I sacrificed both Mogg Fanatics, dealing 4 damage, and then proceeded to unload both Burst Lightnings and the Lightning Bolt for a lethal amount of burn.

Faeries is an incredibly easy match-up for a deck like this. Long gone are the days when Riptide Laboratory with Spellstutter Sprite made Extended Faerie builds beat red decks. If there's one thing going for a deck like this it's how well it does against what is likely to be the most-played deck in the new Extended. 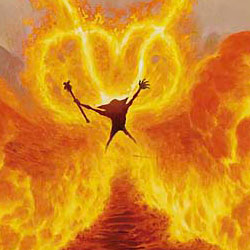 My opponent cast a Ponder, followed by a second Ponder, and Ascension went active. Another Manamorphose and was able to make some extra mana and draw two cards. My opponent continued to cast more card draw spells and eventually fired a Bolt (and copy) at my Mogg Fanatic and Ember Hauler. I sacrificed both, targeting face, and my Quest came online. I drew Burst Lightning, sacrificed my Quest, and fired all three one-mana burn spells at my opponent's face—for lethal.

Again, the deck proves how fast it can kill an opponent. A Quest for Pure Flame-themed red deck can easily race combo decks.

I'll admit that these results are somewhat skewed, though. Red decks have, historically, been very good at winning Game 1. After sideboarding, most of my opponents would probably have a good deal of cards that prevent them from succumbing to burn spells. It's important to remember that people will actually slow down their own deck when sideboarding, though. They may be able to live an extra turn or two, but that may not matter if they're slowing themselves down by more than a turn.

I hope you all enjoyed Burn Week here at Building on a Budget. I strongly recommend bringing Quest Red to your next Extended event. The deck is fun, and extraordinarily powerful. If you happen to have enough appropriate dual colored lands to splash white or black then it's probably worth it. Cards like Kor Firewalker are very hard to beat if you don't prepare your deck for them. However, if you don't think there will be a lot of white then it's fine to stick with the mono-red list.

Be sure to tune in next week for Imprint Week. I have a really exciting Mimic Vat deck for Extended that I'm eager to share with you!