A Case for Combo

ello and welcome to the first week of Magic 2011 previews here on magicthegathering.com. One of my favorite aspects of Constructed Magic is the existence of combo decks. Good combo decks require a few different things to happen. First, and most obviously, you need the combo itself. Second, you have to get to and protect your combo, so you need the cards that enable your combo. Lastly, there must be a metagame that's conducive to the combo itself. As an example, if the premier deck in the format is an aggressive creature-based strategy that happens to use its graveyard for advantage (Both tempo and card based) then you can expect a lot of players to bring some graveyard hate out of the board. If your combo deck relies on an unscathed graveyard, then it probably isn't the right time to reveal it to the world.

Combo decks have existed as healthy components to almost every metagame in history. The danger that comes along with powerful combos can be overlooked at times, tying the hands of deck builders in a given format. From Channel / Fireball to Dark Depths / Vampire Hexmage, combos have been an important piece of Magic history.

One of the most obvious combo enablers of all time is the ritual. Combo decks have been reveling in the power of rituals long before they had access to the storm mechanic. My friend, Ryan Brower, was the first person to introduce me to the new generation of combo. I had seen Necropotence decks and Prosperity / Cadaverous Bloom variations, but I had never seen anything like a turn one Yawgmoth's Bargain.

This type of combo holds an important lesson for deck builders. Sometimes a card is powerful enough that you create a pseudo-combo by pairing it with something that allows it to hit the battlefield a turn or two earlier than R&D expected it to. Yawgmoth's Bargain is the most obvious example here. A recent example of this type of combo is All-In Red. Extended players experimented with the most degenerate turn one plays available for a deck that packed piles of rituals, moxen, and spirit-guides. I've listened to many sad tales wherein our hero has fallen in the face of a turn one Deus of Calamity.

Rituals have taken on a very new purpose since the introduction of the storm mechanic. Rituals naturally combo with storm cards; storm combo is about two things, increasing your storm count and accelerating your mana. Rituals do everything here. They even let us combo off earlier.

A lot of people have called combo's viability into question since Extended's rotation a few weeks ago. We lost almost all our rituals, Dark Depths, and Glimpse of Nature.

The card I'm about to introduce will be a tool that many combo decks use for the next few years. Without further ado, I would like to introduce you to Pyretic Ritual. 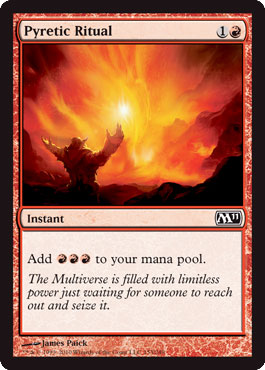 There has been a lot of musing about the death of combo on different forums. Personally, I'm happy to see that R&D still wants to blow some wind into my sail.

Lets dissect the implications of a card like Pyretic Ritual.

. After scouring over Gatherer for a few minutes I decided that Magus of the Moon is probably the most powerful thing we can do. This may be a misread of the format, though. The incredibly high density of non-basic lands associated with extended may change with the rotation of Ravnica block dual lands. However, the 3,000 pound gorilla in the room, Faeries, will certainly pack enough non-basics to be severely hurt by Magus of the Moon. Some Faeries players may try playing extra basics, but trying to cast spells that cost

on turn one and spells that cost

on turn four seems like it requires all the fixing available. I played a lot with Magus of the Moon back when Faeries was the new kid in the Standard metagame. In my experience, the most effective tool against Magus of the Moon is Murderous Redcap. Redcap is a powerful spell against most decks that pack the Magus even if they don't draw the namesake. When all of your lands are turned into Mountains you can simply cast Murderous Redcap for red mana and easily two for one your opponent.

Lets make some decks with this thing!

The first deck that I thought of when I initially saw this card was a Swathstorm combo deck. Magic 2011 gives us an extra Ponder in the form of Preordain. Extended will probably be a format mostly dominated by creature decks that plan on fighting fair. Attacking these types of decks with combo is usually an excellent strategy.

Here's how the combo works for those of you that haven't seen it. You spend the early turns of the game developing your mana with charge lands or by molding a perfect hand with your copies of Preordain and Ponder. Once you're ready, you use the storm generated by Lotus Bloom, Pyretic Ritual, Manamorphose, Ponder, Preordain, and Chromatic Star to power out a huge copy of Grapeshot. Pyromancer's Swath means you only need seven spells to go with your grapeshot. Lightning Bolt also helps the cause. It doesn't seem unreasonable to have your Lotus Bloom come off suspend on turn four, cast a copy of Pyretic Ritual, cast a Pyromancer's Swath, Lightning Bolt your opponent down to 15, and Grapeshot them down to zero. Copies of Preordain and Pyretic Ritual don't even exist yet, so playing games with the deck right now is not even possible. I'm confident that a deck like this has the speed it needs to keep up with most of the proposed new Extended lists. 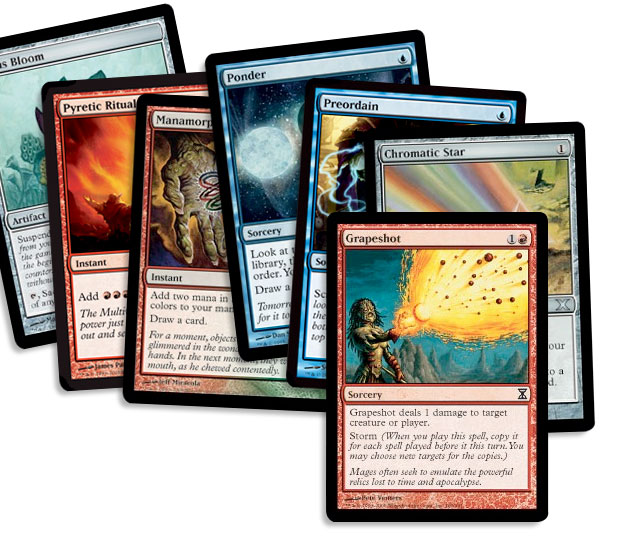 Another similar deck that made some waves last year but always seemed to come up short in a format full of Vampire Hexmages and Dark Depths is the Hive Mind deck from the last Extended season.

Here's how the combo works for those of you that haven't seen it. You use rituals to ramp your mana up and cast a Hive Mind. Once you have Hive Mind in play you cast a Pact. The Hive Mind will put a copy of that spell onto the stack for your opponent. Your opponent will be forced to pay for the Pact during their next upkeep or lose the game. You obviously don't give your opponent free spells they can pay for, so the Pact and Hive Mind combo essentially wins the game all by itself. This is another deck that uses Pyretic Ritual to ramp itself into an expensive combo piece. Once you get a Hive Mind in play and you have a Pact in hand, then it becomes pretty impossible for your opponent to win. Things are especially tough for your opponent when you're able to get the Hive Mind onto the battlefield before they have five lands in play.

Another deck that looked like it was ready to die but was given a second chance with the printing of Pyretic Ritual is Dragonstorm. Dragonstorm is an interesting type of storm combo. The rituals that a Dragonstorm player would have access to are a lot less impressive than they may have been in the past. On the other hand, the card selection opportunities here are a lot more impressive than their counterparts from days of yore. This probably means that the deck needs to be rebuilt. Bogardan Hellkite, Dragonstorm, and the ramp effects are all obvious, but the support spells are a lot more impressive these days. For example, Volcanic Fallout lets us buy an absurd amount of time against the Faerie deck and any type of green-some-other-color(s) strategy where aggressive creatures like Goblin Guide are next to cards like Bloodbraid Elf. The huge number of card selection spells available let us play cards as singletons or two-ofs without them being overly random. The old problem of drawing Bogardan Hellkites is solved by newcomer See Beyond.

Lets take a look at a Dragonstorm deck for the new Extended.

4 Bogardan Hellkite 1 Magus of the Moon 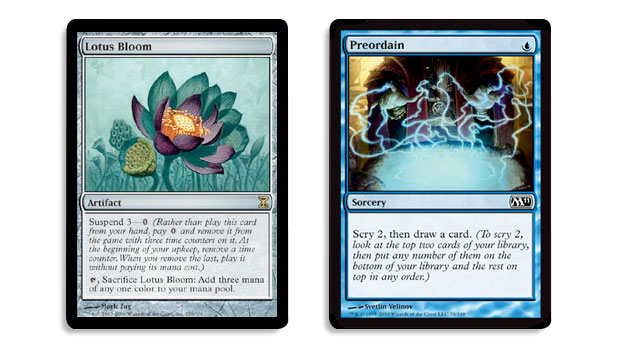 This list looks surprisingly good. It's important that you prevent yourself from going on auto-pilot with a deck like this. For example, if your opening hand is Lotus Bloom, Island, Fungal Reaches, Ponder, Preordain, Lightning Bolt, See Beyond. A lot of players might start out by suspending their Lotus Bloom, "Well I know I want to suspend this," but that can be a trap play. Often with a deck like this, one that can actually play a game while it sets up a combo, it's important that you plan out your turns. How often will that opening hand actually combo someone on the fourth turn? Probably a very small percentage of the time. It's probably correct to Ponder first and see what you get. If you end up with a another Lotus Bloom, then it seems like a safe bet to suspend both and hope the Dragonstorm is somewhere that it can be found by your Preordain, your See Beyond, and your next two draw steps. If you don't find a second Bloom, though, it's probably correct to just hold onto the Bloom until the second or third turn. I like setting a timeline for winning a game. If it's clear you need to win on turn five, then set it up to come into play on turn five. If you have a bit longer then you can wait accordingly. 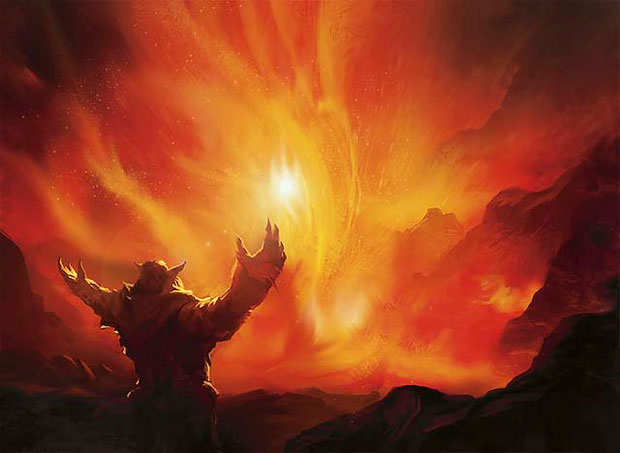 Pyretic Ritual is a card that should be flagged more for its potential power rather than for its immediate impact. Pyretic Ritual will be correct for a tournament at some point; the major trick is finding the perfect moment to spring a card like this into action. Ritual-fueled combo decks always linger on the edge of playability for months at a time before they come back and dominate a tournament. LSV proved this to us in 2008, when he showcased an unprecedented mastery of a format. He won the Extended Pro Tour with Elves, 6-0ed the Extended portion of Worlds with a Swans of Bryn Argoll deck, and, after warping the metagame completely, he showed up to the Extended Grand Prix in California and won with an offbeat ritual based storm deck.

I'd love to hear your wacky new ideas for Pyretic Ritual. Shoot me an email or leave a comment in the forums! Make sure to check out the rest of the Magic 2011 Visual Spoiler and don't forget the Magic 2011 Prerelease Events July 10-11!