Due to unforeseen circumstances, Building on a Budget is celebrating Rerun Week more literally than intended. What appears below is last week's article from this slot for those who missed it. Also be sure to check out Mike Flores's analysis of the top Constructed decks from the World Championships, and the complete Worlds coverage from Memphis.
–Kelly Digges, magicthegathering.com editor

eriously? That's a lot of pumpage. I've had this strange soft spot for Crucible of Fire ever since the first time I got one fourteenth pick in a draft. The reason the soft spot is strange is because I've never actually taken the time to build a deck around it. That's about to change, however.

Dragons are complete bad asses. They're huge beasts that crave power and respect. That's the problem with Crucible of Fire: it makes creatures huge that were already huge. If there's a good Crucible of Fire deck, then it needs to be built around undercosted dragons. When I play a Crucible of Fire, I don't want it to sit there on the table and look pretty until the sixth turn when I get to play some fatty boom-boom dragons.

There's a solution to the high cost of Dragon cards, though. Changelings! I can justify playing Crucible of Fire if I play enough changelings that cost three or less.

Fire-Belly Changeling: This little guy may seem like it isn't good enough, but it's a changeling that costs two mana, so it'll probably make the cut.

Skeletal Changeling: Regenerate is a pretty relevant ability when this is a 4/4 or a 7/7. Again, two-drops are a commodity, and I'm going to be playing with this one.

Taurean Mauler: When this guy first got printed everyone seemed to go nuts over it. It's not very long before Taurean Mauler really starts to get out of hand. My opponent needs to have a removal spell or this guy will get huge all on its own. It's more budget-friendly these days, so it won't be emptying anyone's bank account. (You can get it for less than 0.5 tix online.)

Ghostly Changeling: It's a three-cost changeling that can be pumped—I like the sound of that. Slimer will demand a blocker every turn he attacks.

Moonglove Changeling: Deathtouch doesn't really seems relevant once I consider how big it'll be once I have crucible in play. If I could see myself cutting a changeling, it would definitely be this one.

The deck needs to have a good suite of support cards too. Red and black are a pretty good duet in the support department. We can play a good amount of reach and just enough disruption. The cards that first jump to mind in this category:

Shriekmaw: Shriekmaw is quite the fine gentleman. He has the courtesy to remove one of my opponent's creatures and the class to stick around and fight afterward. He works extremely well with Changeling Beserker too.

Incinerate: An extremely efficient removal spell that can go to the face in the late game. I'm definitely going to play four of these in a deck like this.

Magma Spray: A very underrated removal spell that gets rid of Kitchen Finks permanently. It's good against Faeries, Kithkin, and any deck with Kitchen finks. I'm not sure, but I don't think I can think of many decks that fall outside these categories.

Flame Javelin: Our mana base probably can't support it, but I thought I'd talk about Flame Javelin because it would be so good in a non-budget version of this deck that played more nonbasic land. I can't stress how important it is to have burn that goes to the head when you're playing a creature-based deck. Four damage for one card is a fine deal these days.

Puncture Blast: Again, this is a very good removal spell for a deck like ours. Like Magma Spray, Puncture Blast also permanently kills Kitchen Finks.

Blightning: Three to the dome with card advantage attached. This card is incredible; the fact that Zoo decks in Extended are playing with it should give you some idea of how good it is.

Raven's Crime: A good way to disrupt control decks and get rid of your excess land.

I shave some numbers and settle on the following list.

I played some games with this list and it was fun, but I still had a lot of trouble winning games with it. I would sometimes have huge creatures in play and be so far behind that I couldn't get back in the game, and I would sometimes get an early lead and then just get stamped out of the game by a Five-Color Control deck. The more I though about it, the more I decided that more burn solved all these problems.

It's my Copernican revelation in Magic. Copernicus figures out that the Earth is round and it rotates around the Sun. Nothing changes; the Earth was always round, and it always orbited the Sun. But, in fact, everything changes. Every time I'm working on an aggressive deck, I fall victim to "powerful" effects. The more I play, though, the more I realize that my decks should just be playing more burn. That never changes; the burn spells just changed names.

This version of the deck did much better. I was now playing enough removal to make my monsters actually relevant. I played a bunch of games with the deck like this and found that it did very well against a lot of the decks I was playing in the Casual Room.

I start with the play, and I keep a pretty nice hand of Terramorphic Expanse, Mountain, Mountain, Skeletal Changeling, Taurean Mauler, Taurean Mauler, and Incinerate. My opponent keeps his starting seven also. My Skeletal Changeling is the first play of the game. He plays an Adder-Staff Boggart and we both reveal lands off the clash. My land goes to the bottom, and I draw a Crucible of Fire. I play a Taurean Mauler and pass. My opponent plays a Boggart Harbinger and gets Wort, Boggart Auntie. On my turn I play Crucible of Fire and attack with both my creatures. The Skeletal Changeling gets double-blocked, and my opponent takes 6 damage. On his turn he plays the Wort and passes. I have the Incinerate in my hand, and I attack for 7. He plays a few more creatures after this, but the gigantic Taurean Mauler just became The Abyss.

I started on the play with a hand of Mountain, Swamp, Magma Spray, Incinerate, Taurean Mauler, Blightning, and Blightning. My opponent also kept, and the first play of the game, a Llanowar Elves, was met with a Magma Spray from me. His second turn play, Wren's Run Vanquisher, met an Incinerate. I had to worry about the Chameleon Colossus in his hand, which he'd revealed for Wren's Run Vanquisher, and I had to make sure he discarded it before he hit his fourth land. I played Blightning the next turn and he discarded some lands. Bad news—he played a land and another Vanquisher on his turn. On my turn I got to make him discard his last two cards with Blightning, including that Colossus. I drew an Incinerate to deal with the Vanquisher on the next turn. I thought my Taurean Mauler would go all the way, but he drew another Chameleon Colossus and the game was over.

I start on the draw and have to mulligan to five, I end up keeping Mountain, Swamp, Terramorphic Expanse, Taurean Mauler, and Taurean Mauler. I didn't draw another nonland card for the duration of this game. My opponent had a Bant Charm for my first Taurean Mauler and an Oblivion Ring for the second one. I don't think I would have had a shot in this game even if I did draw the land. My opponent had a turn-two Sigiled Paladin backed up with Oblivion Ring, Bant Charm, Rafiq of the Many, and Battlegrace Angel.

I start on the play and keep Swamp, Swamp, Terramorphic Expanse, Ghostly Changeling, Puncture Blast, Puncture Blast, and Magma Spray. My opponent makes a turn-two Dragon Fodder, and I play my Ghostly Changeling on turn three. He plays a Sprouting Thrinax. On my turn I play my fourth land, I drew an incinerate. I decided to pass the turn which was definitely a mistake. I should have Magma Sprayed the Sprouting Thrinax and then Incinerated it, letting my opponent get three tokens isn't something I can encourage. I decided to do it on my opponent's combat step but he had a Tarfire to kill it himself and get the tokens. After combat he played another Sprouting Thrinax—this game was going to be pretty tough.

I drew and played Taurean Mauler and passed. He played his fifth land and played a Torrent of Souls targeting the Sprouting Thrinax in his graveyard. He attacked me for 19. I could block two creatures, but I still wouldn't have any way to win the game. I conceded. I really love the token deck, and I missed getting to play with it. I've gotten a lot of emails about the Sprouting Souls deck and I'm happy a lot more people are starting to play with it.

I thought this deck was a blast to play and I hope some of you decide to play it amongst your friends. I didn't fare exceptionally well in the Casual Room, but I had a lot of fun playing with Crucible of Fire. If you can afford some upgrades and a new mana base, then the deck might play well at the tournament level. 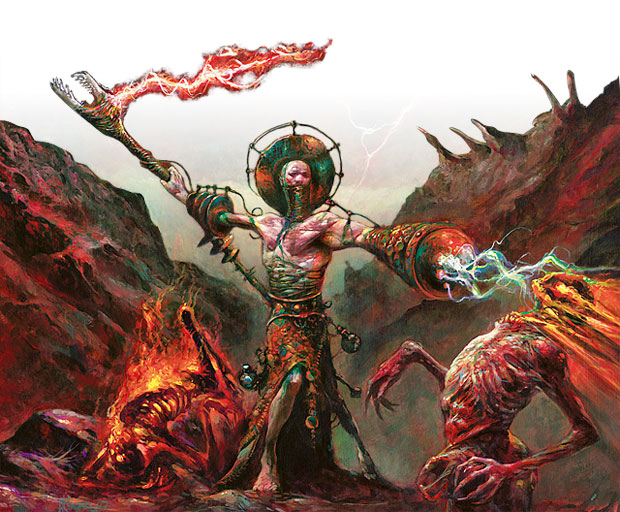 I'd suggest playing Firespout against Kithkin in your sideboard. It's also quite strong against the token decks. Unfortunately, there isn't really a good way to deal with Sprouting Thrinax. I'd also like to talk about Vithian Stinger. Vithian Stinger is really strong against Faerie decks when you're the aggressor. If you're playing a deck that's controlling at all, then the Stinger isn't the best choice. Our deck plays enough two- and three-drops that I could see bringing in a few Stingers. I finished off the sideboard with the Shriekmaw and Changeling Beserker combo; if you're playing in the Casual Room then it's important to play something that can kill a Mycoloth or some other giant devour monster. Here's what the final list looks like once I add a sideboard.

Thanks for reading—wish me luck at Worlds!