Cruelty on a Budget

Posted in Building on a Budget on February 3, 2010

hope everyone had a chance to visit their local Prerelease this past weekend. I had a great time in Philadelphia. I met a lot of awesome people and got to play with some fun new cards. Learning about new cards through Limited is one of the best ways to assess their value in Constructed. I opened two Pilgrim's Eye in my Sealed pool and was very impressed with the card throughout the day. I believe a colorless Borderland Ranger may find its way into a lot of my future budget Standard decks.

Treasure Hunt was another card that really impressed me. Sometimes it would simply cycle, but often enough it drew me two, three, four, or even five cards! The potential of a card like this is really incredible. I am very happy this was printed as a common. The Ponder / Treasure Hunt combo will be a welcome addition to the Standard metagame, especially for deck-builders on a budget.

Speaking of budgets, the new rare creature-lands are all absurdly powerful. They fix your mana, they provide uncounterable threats, and they can block and trade in a pinch. For some odd reason, though, these cards are not getting much respect right now. I did a bunch of trading this weekend and was lucky enough to walk away with a playset of each land. I highly recommend picking these lands up before everybody else catches on (which they will!) . 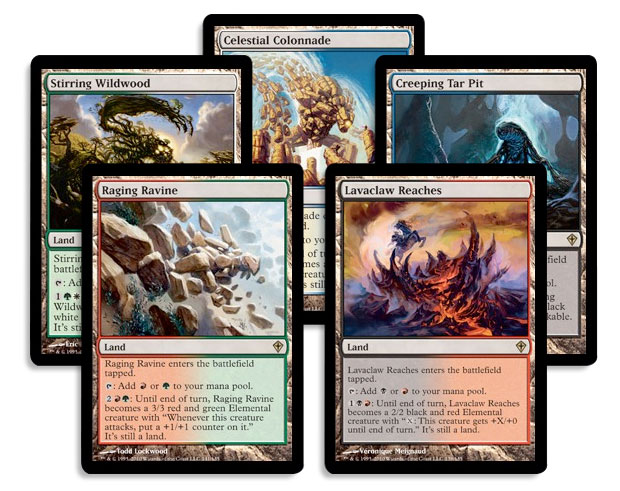 I began tinkering around with a bunch of new deck lists when I got home on Saturday night. After a few go-rounds I decided that I was in the mood to cast some Cruel Ultimatums. Why? Put simply, this format is young and unexplored. Playing with the most powerful spell in Standard seems like the safest route. 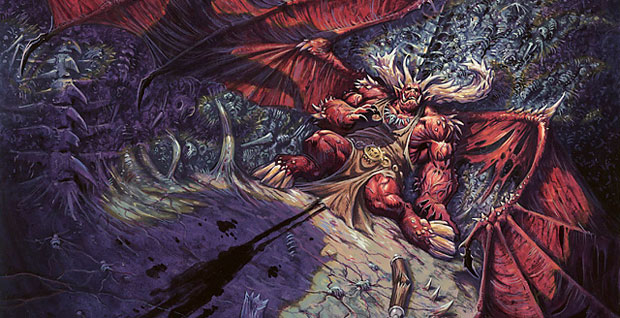 Worldwake rares are still very hard to find. There are no cards in circulation besides the small amount of product opened at the Prerelease. I did not want to build a new deck full of Worldwake rares before they were actually available in your friends' trade binders. Instead, I decided to work on a deck that played with a number of commons and uncommons from the new set. The commons and uncommons should not be too hard to acquire. Just ask your friends who visited the Prerelease with you. You can probably find all the Worldwake cards you need without too much effort.

Cruel Ultimatum: The power level of this spell is still unbelievable to me. The percentage of games that are lost after a resolved Cruel Ultimatum is so low that the card almost reads, "You win the game." I want our deck to be powerful enough to deal with the more expensive decks of the format. Cruel Ultimatum offers that kind of power.

Pilgrim's Eye: As I said, this card really impressed me at the Prerelease. The ability to chump-block for a turn, ping away at an opponent's life total, or perhaps even trade is quite the selling point for a mana-fixer like this. Going creatureless in a Cruel Control deck weakens the effectiveness of the namesake finisher, so a blocking body that can be returned to your hand through the ultimatum is a great boon.

Treasure Hunt: A lot has been said about this card already. Play with it! You will be very impressed.

Ponder: I was never the biggest fan of Ponder outside of combo decks. I usually stood by the argument that it strained mana bases and made people keep awkward hands that should be mulligans in most situations. Things have changed with the release of Treasure Hunt, though. Suddenly, Ponder is a Tier One spell for every blue deck in Standard.

Wretched Banquet: This is a card I have always been in love with. Paying one mana for a removal spell, a la Innocent Blood, is really powerful. This card seems very good in a deck whose only targetable creature is a chump-blocker.

Lightning Bolt: I don't need to say much about Lightning Bolt. This card is still absurd. I had a conversation with a reader on Facebook this weekend who asked if Lightning Bolt still fit in a particular red deck. "Have you ever been dissappointed to have Lightning Bolt in your hand?" I asked. He decided to stick with the Bolts.

Doom Blade: The new Terror is very solid. You need a reliable way to kill format staples like Baneslayer Angel. Doom Blade is still the best option for a Grixis deck.

Searing Blaze: This is another exciting card from the new set. I really like this type of spell. It has a lot of value. Unfortunately, I fear a format with a lot of creatures with protection from red, and our mana base will have to stretch for this to be reliable early on in the game. I still like this card as a sideboard option here against decks that play creatures and planeswalkers. This card kills Garruk Wildspeaker and his Beast token all by itself.

Smother: This one seems like it has just as much value as it always did. I'm a big fan of instant-speed removal.

Double Negative: Bloodbraid Elf still exists. Decks that include Bloodbraid Elf are extremely hard to win against when you are trading one for one. As a result, I feel an anti-cascade spell like this is worth a slot in the main deck.

Sphinx of Jwar Isle: This is a perfect finisher. I want something that cannot be targeted. I don't want to commit more than two slots to finishers.

Halimar Depths: This is another excellent tool to use with your Treasure Hunt. It also works very well with fetch lands if you have them.

Here's how the deck looks once we slop it all together: 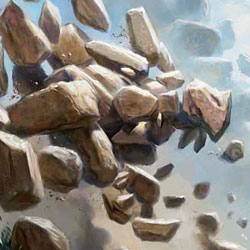 I drew another Pilgrim's Eye, cast it, and found an Island. I played the Island and passed the turn. I could have cast my Sphinx, but I figured keeping Double Negative up and gauranteeing a Cruel Ultimatum the next turn would be better. My opponent cast a Bituminous Blast on my Pilgrim's Eye, and I cast Double Negative countering the removal spell and the Garruk Wildspeaker it cascaded into. My opponent attacked with his creatures, and I took 6, going down to 9 life. I drew a Lightning Bolt, played my land, and cast Cruel Ultimatum. I drew into a Wretched Banquet, another Double Negative, and another land, I returned the Pilgrim's Eye back to my hand, I went back to 14, and my opponent went to 15. He discarded his hand and sacrificed the Sprouting Thrinax.

On his turn, my opponent attacked with all four of his creatures, and I traded with a token. I drew an Akoum Refuge, played it, cast Sphinx of Jwar Isle, and passed the turn. My opponent drew another Bloodbraid Elf and cast it. He flipped into a Maelstrom Pulse that went to the bottom of his library. He decided to hang back for a turn. I used my Lightning Bolt on one of his Bloodbraid Elves before the turn ended. I drew another Cruel Ultimatum, attacked my opponent down to 10, and cast the Ultimatum. My opponent conceded.

Sideboarding: I saw Garruk Wildspeaker, so I'm sure I should be bringing in the Searing Blaze. 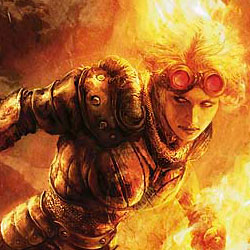 I keep Island, Akoum Refuge, Crumbling Necropolis, Treasure Hunt, Lightning Bolt, Sphinx of Jwar Isle, and Pilgrim's Eye on the draw. My opponent played a Savage Lands and passed the turn. I drew a Searing Blaze, played my Crumbling Necropolis, and passed the turn. My opponent played a land and cast Putrid Leech before passing the turn. I drew a Halimar Depths, and played it, seeing a land, another Searing Blaze, and a Doomblade. I put the Doomblade on top, followed by the land, and then the Searing Blaze. My opponent attacked and pumped the Putrid Leech, but I cast Lightning Bolt in response to the pump. He cast a Sprouting Thrinax during his second main phase. On my turn I drew the Doom Blade, played my land, cast Pilgrim's Eye, and searched out a Mountain. My opponent attacked with his Thrinax, and I took 3. He cast Garruk Wildspeaker during his second main phase and made a Beast token. I drew a Ponder, played my Mountain, cast Searing Blaze on the Beast token and redirected damage to Garruk, and cast Ponder drawing a Wretched Banquet, leaving a Cruel Ultimatum on top and a land underneath it. I cast Wretched banquet on the Sprouting Thrinax and passed the turn.

My opponent cast Chandra Nalaar and ticked her down to destroy my Pilgrim's Eye. He attacked for 3 and passed the turn. I drew the Cruel Ultimatum I left on top. I cast my Treasure Hunt and picked up two lands and another Pilgrim's Eye. I cast the Pilgrim's Eye finding another land and passed the turn. My opponent ticked down Chandra to kill my Pilgrim's Eye again and attacked me for another 3. He cast a Broodmate Dragon during his second main phase. I untapped, played my sixth land, and cast Sphinx of Jwar Isle. My opponent ticked up the Chandra and thought for a bit before he decided to attack with everyone. I blocked a Dragon and took 7, putting me at 4. I drew a Swamp, played my land, and cast Cruel Ultimatum. My opponent sacrificed a token and discard his hand. I went up to 9, and he went down to 15. I drew Searing Blaze, Ponder, and another Sphinx of Jwar Isle. My opponent ticked up Chandra to deal me 1 and passed the turn. I drew a Mountain, played it, and cast a Searing Blaze on each of my opponent's remaining tokens. I took out Chandra Nalaar in the process. I cast Ponder and found a Doom Blade for the Dragon token. I attacked with my Sphinx and brought my opponent to 10. My opponent drew for his turn and cast Garruk Wildspeaker, who made a token. I untapped, attacked for 5 in the air, and cast another Cruel Ultimatum for the win.

This deck seems like it has a lot of potential. I think Cruel Ultimatum is a lot more realistic with the release of Worldwake. There are a lot of common and uncommons in the new set that really help us build budget decks in Standard. Have fun exploring the new set, and I'll see you next week.

Posted in Building on a Budget on February 3, 2010