The 'Crux of Modern

Posted in Building on a Budget on February 8, 2012

ello and welcome to Pro Tour Dark Ascension Week here on DailyMTG.com. The Pro Tour is the highest level of Magic competition. Pro Tour competitors are competing for a prize pool of more than $230,000. Money is nice, but qualifying for the Pro Tour is an incredible opportunity for a number of reasons. Thanks to it, I've been to Japan, Malaysia, Spain, Germany, England, and countless other places my friends could only dream of visiting. My time on the Pro Tour was valuable to my personal growth and it gave me a much broader worldview.

I'm getting ahead of myself, though. You have to qualify before you can go to the Pro Tour and experience these incredible events. There are a few different ways to qualify, but Pro Tour Qualifier events are the most accessible by far. Pro Tour Qualifiers are held regularly all over the world. Winners of these events receive free travel to the upcoming Pro Tour and an invitation to play.

The format of Pro Tour Qualifiers changes from season to season. The current PTQ season is Modern, the newest constructed format. Modern can be a difficult format to build a deck for. There are a lot of cards, like the Ravnica shocklands, that can be very difficult to acquire. Many newer players have shied away from Modern PTQs because they're not willing to invest a huge amount to build a competitive deck.

This week, I'd like to offer up a new Modern strategy with the ability to compete against tier-one decks. A few years ago, Adrian Sullivan showed me a Standard brew he was thinking about playing at Nationals. The deck, called Ivan Drago, featured Primalcrux, an overlooked rare from Eventide.

Primalcrux has always been a beating in the right deck, but newer cards like Dismember and Strangleroot Geist give the deck the added boost it needed to compete with some of the more threatening decks in the format. Primalcrux demands you play an overwhelmingly green deck. In the past, this meant you couldn't play removal spells and your two-drop slot was lacking; this made the decks very weak against early removal spells on mana creatures and defenseless against fliers like Vendilion Clique. Dismember and Strangleroot Geist solve the major issues I felt plagued the deck when I tried it in old Extended formats.

I want to build a deck that makes Primalcrux essentially a one-hit kill. I want all my permanents to have all green mana symbols on them. A lot of people might complain that Primalcrux doesn't have enough evasion—there's no shroud or hexproof and something so simple as a Path to Exile is enough to stop it. It's unlikely opponents will still have Path to Exile in their hands when the Primalcrux comes down, though. Strangleroot Geist, Boggart Ram-Gang, Cloudthresher, Deus of Calamity, and Oversoul of Dusk are all going to hit the table before your Primalcrux. It takes a very special kind of human to not use a Path to Exile on targets like that. Then, conveniently enough, Path to Exile actually ramps you into your Primalcrux, which comes down and starts attacking for 20-something points at a time.

Sometimes we're not going to draw Primalcrux, and in those situations we're going to need some other fatties to fill the void.

Cloudthresher is a super-powerful creature from Lorwyn. It's a 7/7 for six mana with flash, and its come-into-play trigger is probably the best thing you could ask for in the current Modern format. Primalcrux might be the most exciting card in the deck, but Cloudthresher is what made me want to build a green ramp deck in the first place. Cawblade and Faeries are the two most popular decks in Modern right now, and Cloudthresher is a nightmare for both of them.

I've always had a soft spot in my heart for Deus of Calamity. In 2008, I built a red-green deck for Pro Tour Hollywood that featured this incredible creature. If you're playing a lot of mana-acceleration creatures, it's not unusual to cast Deus of Calamity on the third turn. It's easy to imagine how hard it is to lose when you're ahead and have a Deus destroying your opponent's lands. There are a lot of fun tricks with Deus of Calamity that allow you to destroy lands even when your opponent decides to chump it with something like a Squadron Hawk. Remember, Deus of Calamity has trample. I like to attack with Deus of Calamity and entice my opponent to chump block it in order to save a land. When my opponent chumps with a single creature I can cast Dismember on the creature and still deal the full 6 points, thus killing a land. I highly recommend casting this card if you've never gotten the chance—it's quite the beating.

I liked Oversoul of Dusk in theory, but I was underwhelmed when I played against decks like Affinity. I decided to move the Oversoul of Dusk to the sideboard and bring it in when my opponents had no way to deal with it.

My deck needs to have a solid mid-range game plan to soak up my opponents' removal and keep them on a reactive strategy.

Boggart Ram-Gang is excellent here, especially since the hybrid mana symbols count as green symbols for my Primalcrux. A 3/3 hasty for three mana is enough to put most opponents on their heels. They'll be forced to do something crazy, like a Path to Exile, which is a grave mistake on their part because you'll use the extra mana to start casting Cloudthreshers and Primalcruxes a turn earlier. You can replace these with Kitchen Finks if you're able to acquire them and you're having trouble with RUG Delver decks.

Viridian Corrupter is another excellent three-drop in the current format. It's hard to find a deck that doesn't include cards like Cranial Plating, Sword of Feast and Famine, Vedalken Shackles, or Birthing Pod. Each of these cards is absolutely crucial to the respective decks' game plans against us. I chose to play Viridian Corrupter over Viridian Shaman because it more effectively baits people into using removal spells. Opponents will be unable to attack or block with their Kitchen Finks and that's a surprisingly big deal. I also have a few copies of Vines of Vastwood between my main deck and sideboard. It takes some luck, but a well-timed pump spell on an infect creature can steal the game from time to time.

The deck also needs mana accelerators. Cards like Primalcrux aren't very impressive if you're opponent already had time to establish a board presence and has the mana to use a spell like Cryptic Command. We need to be casting our threats early and often.

Llanowar Elves and Arbor Elf are the obvious mana accelerators. Noble Hierarch is better than Arbor Elf, but the card is difficult to acquire. If you're lucky enough to own a few, don't be afraid to make the swap.

Joraga Treespeaker lets this deck have some really degenerate draws. Think about it: turn one Treespeaker; turn two level-up Treespeaker and tap it to cast Strangleroot Geist, turn three Deus of Calamity. It's going to be difficult for any deck to keep up with that kind of power.

Originally, I played all Forests as my lands. This was all well and good, but I quickly realized how often I would have been able to activate a Mosswort Bridge. It's nice to have some form of card advantage and Mosswort Bridge can shut people out of games very nicely.

Here's the final decklist once I put it all together. The deck plays fifteen rares in the main, but all of them should be easy to trade for.


I played a few games with this list against the best decks in Modern to see how it fared. 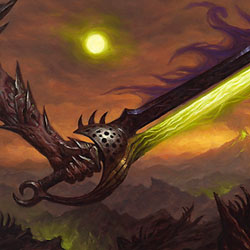 On my next turn, I drew a Forest, played it, and attacked with my team. My opponent blocked the Strangleroot Geist with Kitchen Finks and aimed a Path to Exile at my Deus of Calamity, but I was ready for that. In response, I cast Vines of Vastwood with kicker on the Deus of Calamity and my opponent took 11 damage, allowing me to destroy a land. I used my Mosswort Bridge to flash in my Cloudthresher and with it destroyed both of my opponent's Hawks.

It's important to stress the importance of Guttural Response in your sideboard when playing against decks with Cryptic Command.

Melira Pod is one of the breakout decks of this PTQ season. The deck uses Melira, Sylvok Outcast with Viscera Seer and Kitchen Finks or Murderous Redcap to either gain infinite life or deal infinite damage. Melira's ability prevents your persist creatures from getting a –1/–1 counter when they come back. You can repeatedly sacrifice Kitchen Finks or Murderous Redcap and use their comes-into-play triggers. 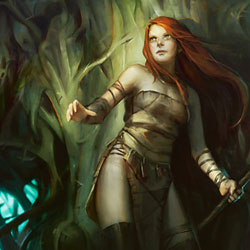 This deck is a great way to get involved in the Modern format without having to jump through too many hoops to acquire all of the cards. The deck is a competitive alternative to the mainstream decks you can play in Pro Tour Qualifiers. Make sure to tune in to Pro Tour Dark Ascension coverage this weekend when you're not playing in your local PTQ. Who knows? Maybe you'll be competing in the next Pro Tour!

Posted in Building on a Budget on February 8, 2012