Posted in Building on a Budget on September 7, 2011

elcome back to Innistrad previews here on DailyMTG.com. This week, I have an interesting enchantment that's sure to be great for casual play and may have a chance in competitive play if it's given the right tools to work with. 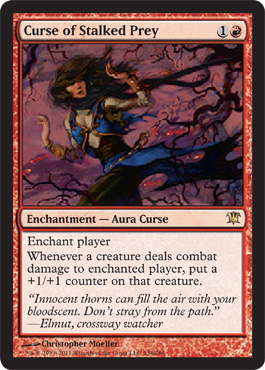 The flavor of this card is perfect. You can imagine your horde of vampiric creatures as they grow stronger each time they sink their teeth into your opponent. The trigger reminds us of Sengir Vampire's triggered ability. Giving a creature +1/+1 whenever it damages a player is an excellent way to convey vampirism through existing game mechanics.

Curse of Stalked Prey is excellent for Limited decks with a lot of morbid effects. Players will trade aggressively with you to prevent your creatures from getting out of hand thanks to the Curse... but by trading aggressively, your opponents will haphazardly turn on your Morkrut Banshee or Hollowhenge Scavenger. Of course, it depends how far they push the morbid mechanic, but if it's possible to have a lot of this in a Limited deck, then Curse of Stalked Prey seems like an excellent inclusion for your forty card deck.

In Constructed, Curse of Stalked Prey functions optimally alongside inexpensive creatures and token generators. Creatures with abilities like infect or (this one is nice) double strike work especially well here.

Glistener Elf is a ten-turn clock, but let's see what happens when we add a Curse of Stalked Prey to the equation.

Curse of Stalked Prey more than halves the amount of time required to end your opponents' existence when combined with a one power infect creature. This may not seem relevant, but if Standard ever gets to a place where people aren't playing spot removal or Gideon Jura, then Blighted Agent and Inkmoth Nexus may find a home alongside this enchantment.

Perhaps the most impressive card to sleeve up alongside Curse of Stalked Prey in the current Standard format is Shrine of Loyal Legions. Cracking a Shrine on the end of your opponent's turn is always going to put them in a rough spot, but doing so and doubling the power of all the Myr created on the very next turn is a scary prospect for most decks.

Clifftop Retreat, a new rare land, encourages deckbuilders to work on a color combination that hasn't been explored in some time. A red-white token strategy will be able to gain a lot of extra footing with access to a better mana base. Red will give us access to Curse of Stalked Prey, but it also give us an opportunity to play Kuldotha Rebirth, which combos nicely with our new enchantment. 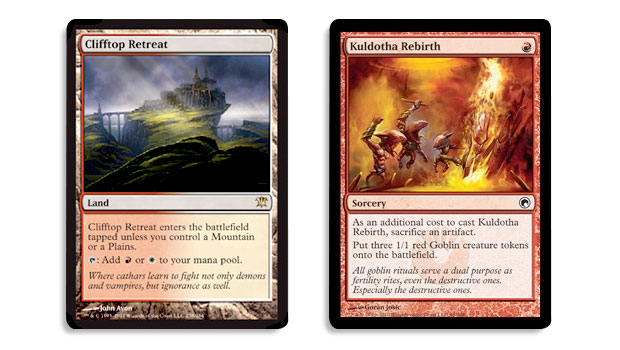 Kuldotha Rebirth allows a deck with Curse of Stalked Prey to have some pretty impressive draws. If you make three 1/1s on your first turn and follow it up with a Curse of Stalked Prey, then you're already threatening 6 points of damage on the third turn, then 9 on the fourth turn, and that's before you even cast any other spells. 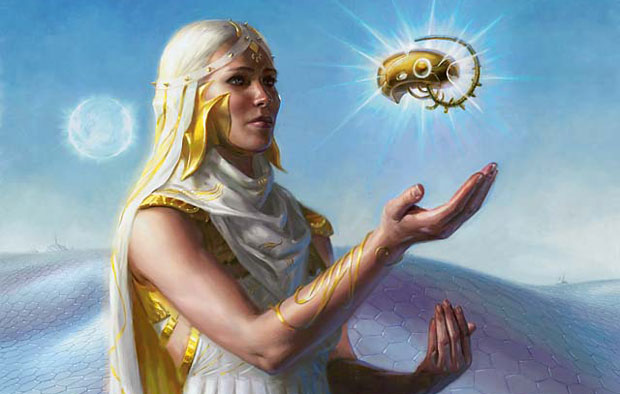 It's been almost a year since the last time I talked about Myrsmith, but now seems like a perfect time to dredge up the powerful token generator. Myrsmith is an excellent creature for a deck that includes Curse of Stalked Prey. It's important to remember that Curse of Stalked Prey doesn't do anything on its own. You can't build a deck with this enchantment if you're not willing to play a huge pile of creatures. Even removal spells will have to sit on the bench for the most part. The goal will be to flood the board. If you have four creatures and your opponent has, one that's larger, then you're probably charging in with your team even if your opponent is at a higher life total.

Myrsmith lets us get to the point where we can start attacking even when an opponent has a healthy board presence. In the past, decks that rely on a lot of token production have used an Overrun effect to break stalemates. If we're putting our chips in with Curse of Stalked Prey, then we can't afford such luxuries, and we need to be able to flood the table quickly and efficiently.

Origin Spellbomb combos nicely with a lot of what our deck is trying to do. It produces card advantage that allows us to continue a steady stream of board flooding. It combos well with Kuldotha Rebirth, negating the card disadvantage produced by the red sorcery. It even makes a creature on its way onto the battlefield when you have access to a Myrsmith. This seems like an obvious four-of in a deck like this. It does all of what we want, and none of what we don't.

Memnite may not seem like much of a beater, but having a creature with any amount of power and zero mana cost is a huge boon for a deck that plans on getting maximum value out of Curse of Stalked Prey. Memnite creates a mini-army when you play it alongside Myrsmith, and it hits the battlefield early enough that it can become a major threat if left unanswered while you have a Curse of Stalked Prey enchanting your opponent.

Shrine of Loyal Legions is the best card in this deck. This deck is shaping up to have some real weaknesses against decks that have access to Timely Reinforcements and Day of Judgment, but Shrine of Loyal Legions lets us power through even the most controlling of draws. Curse of Stalked Prey combos nicely with a horde of 1/1s. Making four Myr with your Shrine of Loyal Legions will translate into 12 damage over two turns or 24 damage over three turns. It's not unreasonable to get even more tokens out of this powerful artifact and put your opponent in a really rough spot in the later stages of the game.

Vault Skirge may be the best one-man squad to play with Curse of Stalked Prey. Vault Skirge is an artifact and a black creature. This makes it immune to Go for the Throat and Doom Blade. It flies, so it will likely be getting in reasonably often, especially when Squadron Hawk rotates out of Standard with the release of Innistrad. The life swings that Vault Skirge will be able to accrue are backbreaking when you take a Curse of Stalked Prey into account.

Glint Hawk is another inexpensive flyer that helps flood the board when you're churning out tokens with a Myrsmith.

Signal Pest may be hard to get counters on with our Curse of Stalked Prey, but it's not out of the question thanks to Contested War Zone and additional copies of Signal Pest. We're playing enough token production and board flooding that Signal Pest will usually be producing enough damage on its own to warrant playing it.

I included a couple copies of Dispatch to clear the way for our swarm of attackers.

Contested War Zone is huge for this deck. We have A LOT of board presence, and having a land that can easily score 5 or more points of damage is very important to our strategy.

Once we put all the cards together our deck looks like this:

This is just one of many routes a player can take when building a deck with Curse of Stalked Prey. If you're looking for other applications of the new rare enchantment then you might want to try a red-black deck that uses cards like Tormented Soul, Vault Skirge, and Vampire Interloper (from the Card Image Gallery). 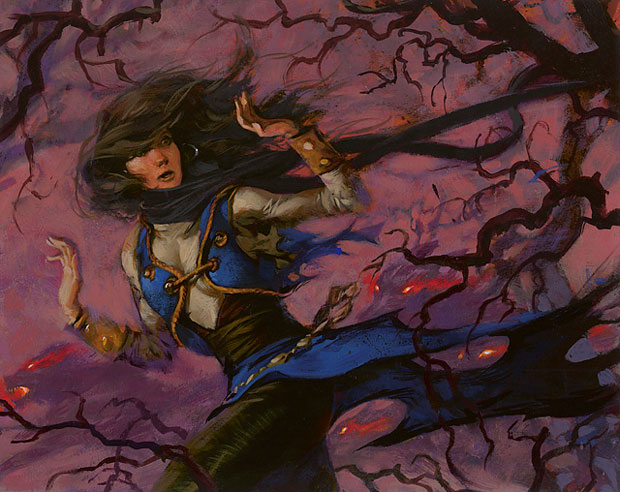 The Innistrad Prereleases are just around the corner. Prereleases are one of the best times to be a Magic player. They offer an incredible introduction to competitive Magic where you won't be penalized for small mistakes. This may not seem like a huge deal, but playing competitive Magic is often very different from playing a game on your kitchen table. Prereleases give you an idea of how tournaments operate. Players and judges will have relaxed outlooks and generally won't penalize newer players for lack of tournament knowledge. Innistrad Limited will be the format of the upcoming Pro Tour Qualifier season. Going to a Prerelease is a great opportunity to get some early practice under your belt before the set even hits the shelves.

The best part of Prereleases, however, goes beyond the cards. People are the most important part of one's experience with Magic. I've met some of my best friends through Friday Night Magic and Prereleases. The same people I played Magic with in 1999 are the people I'm inviting to my wedding now. Prereleases are a relaxed enough environment that competition doesn't hinder our ability to relate to another. Remember to be a humble winner and a gracious loser—your Round 1 opponent may be your best man someday!

Posted in Building on a Budget on September 7, 2011