everyone, and welcome back to Building on a Budget! This week's article is going to deal with Hostility. No, not me being angry at everyone (Bleiweiss Smash!)—the red Elemental Incarnation from Lorwyn. Hostility is a 6/6 hasty Elemental with the ability to turn the pain into even more pain. This week's column is also special in that it's my second Building on a Budget deckbuilding challenge! 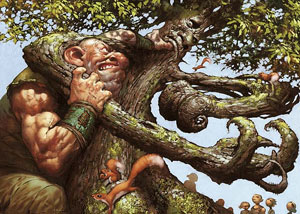 A few months back I ran a challenge where I gave you, the reader, a list of cards and ticket costs, and then challenged you to build a fantastic dredge deck. You came up with tons of creative decks, and I narrowed the field down from twelve finalists to one last deck, which I evolved over the next couple of weeks. This time, the challenge is centered around one specific card (Hostility) and not a mechanic (dredge).

In order to let you guys build a Hostility-based deck, I need to give you some tools: a goal, a list of cards that you are allowed to use, and some prices for those cards. You see, this is Building on a Budget—you have the same restrictions that I do when it comes to building a deck! Otherwise, this wouldn't be much of a contest, would it? Here's the rules:

That's it for the rules! Now, let's generate a card list, shall we?

Step One: Identify What You Want the Deck to Do!

Hostility is a pretty straightforward card. It is a 6/6 Elemental with haste for

. While it is in play, every point of damage you do with spells is prevented, and you generate a 3/1 haste creature for each point prevented. If it is put into a graveyard from anywhere, it is shuffled back into your library. Let's take a closer look at these three facets of Hostility.

: Hostility is a pretty solid beater, even without any of its other abilities. Rorix Bladewing was a 6/5 haste flyer for

Turn spell damage into 3/1 haste Elementals: Or, as printed: "If a spell you control would deal damage to an opponent, prevent that damage. Put a 3/1 red Elemental Shaman creature token with haste into play for each 1 damage prevented this way." It is important to note that Hostility's ability replaces spell damage. From the comprehensive rules:

In short, sorceries and instants are what we're after here. Creatures with comes-into-play abilities are already permanents once their abilities trigger, so Bogardan Hellkite won't work with Hostility. Neither will Pandemonium (triggered ability from a permanent), Seal of Fire (already a permanent), or Keldon Megaliths. Remember also that loss of life is not damage, so Profane Command will not work well with Hostility, at least for making 3/1 creatures. 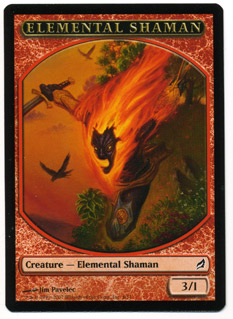 Hostility can potentially triple the damage done by any direct damage spell. Shock turns from 2 damage to 6, in the form of two 3/1 Elemental Shaman creatures with haste. Note that these creatures do not go away at end of turn—they stick around until killed. Hostility will replace the damage dealt by any spell that damages an opponent, including mass-removal spells such as Molten Disaster.

When Hostility is put into a graveyard from anywhere, shuffle it into your library: While this ability is great for not getting decked, it's not-so-great if you wanted to go with a reanimation strategy. Therefore, reanimation is out, from Dread Return to Horde of Notions.

Given these notes, the most straightforward uses for Hostility are in an Elemental tribal deck or in a burn deck. In order to cement this, let's go on to step two!

I went to Gatherer, and listed every card available in Standard. I wrote down every card which caught my eye for a potential Hostility deck, even if I thought the card might be too expensive (ticket cost) in the end. After I was done making the lists, I made the following cuts:

Here's the list of the cards you can use for the challenge! Remember, the deck must cost 30 tickets or less using the prices listed below. Please try to keep your deck at (or as close to) 60 cards as possible—unless you have a good reason to run a deck with more than 60 cards, chances are that I will count that 61st (or later) card against you! Have fun with this, and I look forward to seeing what decks you guys come up with in the forums!

Don't forget to post your decks to the forums—any decks sent via email will unfortunately have to be disregarded. Non-deck-related e-mails will be great to receive! Also, don't forget to vote on the above poll—the choice that wins will be the format of next week's column! Prismatic! Vanguard! Singleton! Classic! I love it all, but let's see which one gets the most love from the budget crowd.