This article erroneously lists Ponder as a legal card in the Modern format. I cannot excuse this oversight during editing and due to its core nature for the deck discussed below it cannot be easily corrected. This sort of error should not happen and will not happen again.

ecently, many readers began asking me to build a Modern Turbo Fog deck. I tried a few different lists but was unimpressed with every iteration. The deck had an excellent Game 1 against a lot of different decks; after sideboarding, however, the deck couldn't buy a win.

I wanted to build a Modern deck with the same sentiment. Prison-style decks that plan on minimizing the opponent's ability to operate are a huge piece of Magic's history, even if they're not really a part of modern magic. (Outside of Vintage and Legacy STAX archetypes.) 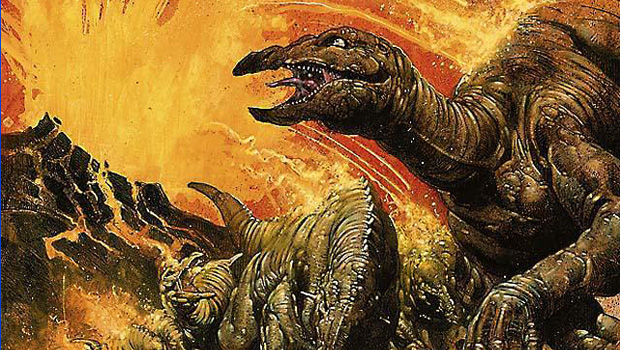 Today, I'd like to introduce you to the deck that made me a competitive Magic player. Eminent Domain is, in my opinion, one of the most brilliantly conceived archetypes in the history of the game. After Ninth Edition was released, many of the world's best card analysts postured that Wildfire was the most powerful spell in Standard. Then we saw decklists, and no one was playing Wildfire. A bit of time passed and people forgot about "The best spell in Standard" and the card went seemingly ignored until Adrian Sullivan decided to step outside of the box and design the first viable deck to include Wildfire.

Eminent Domain is a deck that focuses on controlling the opponent's resources. The deck is excellent at setting up perfect Wildfires. Cards like Dream Leash and Annex ensure you'll find a turn where your opponent has four lands in play and you have six or more. At that point, Wildfire is essentially a Cruel Ultimatum. The deck protects itself with inexpensive removal spells while it sets up a big Wildfire turn. This deck has a very special place in my heart because with it I won Friday Night Magic every week for thirteen weeks in a row back in late 2005–early 2006. 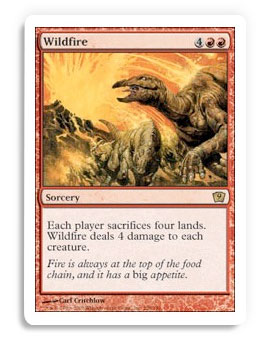 Once you learn how to time your spells, the deck has an incredible matchup against both creature decks and control decks. Combo decks will give you some trouble, but if you're willing to invest in copies of Chalice of the Void for the sideboard, you should be fine in Games 2 and 3 against them too.

Let me talk about the cards and why they're in the deck.

Wildfire is an incredibly powerful spell currently overlooked in Modern because of its high casting cost. A lot of Modern decks rely heavily on mana creatures and Wildfire does an excellent job of locking down your opponent. After you cast a Wildfire, it is not uncommon for your opponent's next turn to consist of drawing a card and simply saying, "Go."

Annex is Wildfire's best friend. This card produces an interesting kind of card advantage. This card is incredible against Tron decks that seem to be some of the winning-est decks in the format. Against other strategies, Annex helps you set up a brutal Wildfire. 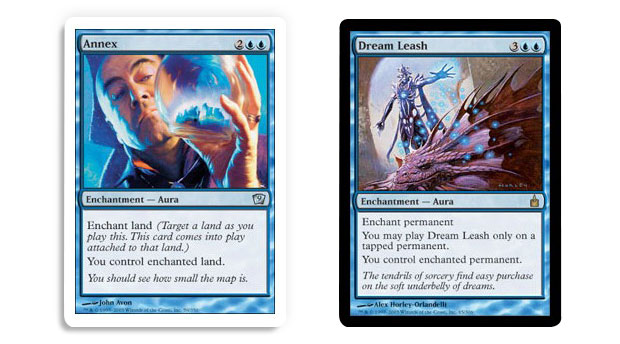 Dream Leash gives us redundancy with Annex. There are a lot of matchups where we're probably just stealing a land, but sometimes your opponent will have a massive Knight of the Reliquary or Tarmogoyf and it becomes necessary to steal it over to your side of the table.

Mana Leak is a great reactive spell. Remand is probably better in this spot, but the Ravnica uncommon has become incredibly difficult to acquire lately. Mana Leak still fulfills the same role in the deck and it's much easier to find. A deck with Annex, Dream Leash, and Wildfire will be hard-pressed to find a time where Mana Leak isn't just a

Standard versions of Eminent Domain didn't have access to Ponder, but I'm sure they would have played it if they did. It's important to note that this is one of the decks where you probably don't want to cast your Ponder on turn one unless you're missing a two-mana accelerator. I recommend holding the Ponders until it becomes clear what exactly you need to find. The deck has answers to just about everything and it's worth waiting to find a perfect card because you'll have plenty of mana after the fourth turn anyway.

Pyroclasm is very well positioned right now. Artifact aggro decks seem to be the flavor of the month in Modern and Pyroclasm punishes those decks pretty hard. Pyroclasm is also excellent against Delver of Secrets and Lingering Souls.

Repeal is an important one-of here. There are permanent types you'll have a lot of trouble dealing with; for example, if your opponent has a Worship in play it can become very difficult to end the game. The deck can lock an opponent out of the game pretty well, but the cleanup has to be messy sometimes. A single copy of Repeal will let the deck win a lot of otherwise unwinnable games.

Lightning Bolt is the most efficient spot-removal spell available to red players. You want to be using this on turn one or in conjunction with another spell on the same turn in order to spend your mana most effectively.

The original Eminent Domain deck won with Kamigawa dragons. Kokusho, the Evening Star and Keiga, the Tide Star would usually come down after a Wildfire and clean up the game. These days, we have a significantly better win condition: Frost Titan. Think about it: you cast Wildfire and destroy all of your opponent's lands and creatures. You pass the turn, your opponent plays a land and passes. You cast Frost Titan and tap the land your opponent played.

Yes, that's a dream scenario, but it's going to happen more than you think. Frost Titan's protection ability is close to hexproof when you're destroying and stealing your opponent's lands. Frost Titan also closes the game very quickly. Three attacks will usually be good enough, and because of Ravnica shocklands and fetchlands, you might be able to finish a game with two attacks and a Lightning Bolt.

Mind Stone and Izzet Signet provide the deck with necessary acceleration. I'd probably Ponder to find one of these if I didn't have it in my opening hand, but it's not the end of the world when you have to spend the first couple turns playing removal spells and Mana Leaks.

Mikokoro, Center of the Sea works really well in a deck that controls its opponents' resources. Letting your opponents draw cards is fine when you have eight lands and they have one. You can use your cards much more effectively.

Here's the final sixty that I played a few games with the deck to see how it fared against the current Modern metagame. 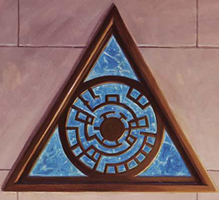 I drew another Frost Titan and cast Ponder, putting Annex on top of a land on top of a Pyroclasm, then drew the Annex; I then cast Annex on one of my opponent's lands but my opponent stopped it with Remand. My opponent played another land.

I drew my land, played it, and cast Frost Titan, tapping my opponent's Azorius Signet. My opponent cast a main phase Thirst for Knowledge and played a fourth land.

I untapped and showed my opponent Wildfire. My opponent conceded.

As expected, Tron is a very easy matchup for the Wildfire deck. Tron needs to draw nearly perfectly to have a shot against you, and post-sideboard you can sideboard out your creature removal and bring in cards like Spell Pierce and Negate. 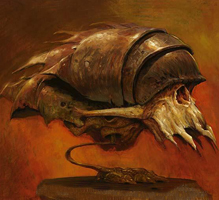 The deck should also do well against creature decks that aren't on a Knight of the Reliquary plan. Pyroclasm and Lightning Bolt let you buy enough time to start casting your big spells.

You'll want to build a sideboard before you bring this deck to any tournament. Keep in mind the proper numbers for your sideboard. For example, you have four Lightning Bolts and two Pyroclasms that are very weak against a lot of decks. Make sure you have exactly six cards in your sideboard that are good against those decks. Cards like Negate and Spell Pierce will fill this role perfectly.

You'll need some cards against combo, and Spell Pierce and Negate won't be good enough. I recommend Trinisphere or Chalice of the Void right now, because it's something the Pyromancer Ascension decks won't know how to deal with. The rest of your sideboard should probably be filled with cards like Flame Slash, Slagstorm, Shattering Spree, and Dismember. The numbers are malleable and the correct iteration will depend on your exact decklist and the metagame you expect. I've been thinking about writing a column on proper sideboard construction and I'd be interested to hear whether or not there's a demand for that.

Unfortunately, it's difficult to make the deck strong against combo strategies, but a healthy dose of interaction in the sideboard could help alleviate that issue. If you're expecting lots of creatures and control decks and not a lot of Pyromancer Ascension, then this is a great deck for the Modern metagame.

The entire deck is easy to acquire. Frost Titan is even easily available right now.

I'll probably play something along these lines in my next Modern PTQ. I strongly recommend putting the deck together and taking it for a spin. It might be the most fun deck ever if you're into this sort of thing.

As always, hit the forums or shoot me an email with any questions, comments, or ideas for future columns.