The Evolution of Fractured Crusading Sliver Fungus (Part 1 of 3)

you - yes, you! On the other side of this computer screen. Do you know what time it is?

Last week I asked which deck you wanted me to evolve, and you spoke with four far-from-unified voices and came up with these results:

We're always aiming to please here at Building on a Budget, so I have a deck that has a little something for everybody! May I present to you: "I Hope to have Real Fun with the Evolution of Fractured Crusading Sliver Fungus!"

I Hope to have Real Fun with the Evolution of Fractured Crusading Sliver Fungus!

"But Ben," I hear many of you screaming from the future forums, "this deck is a jumbled mess! It makes no sense, it has 240 cards, and the lands are all wrong? Plus, four theme decks is wayyyyyyyyyyyy over budget! Is this the end of all civilization as we know it?"

I didn't think so.

In all seriousness though, I had an idea of taking all four theme decks, throwing them together, and then cutting cards 20 or so at a time until we ended up with a sixty card deck. After five games with this monstrosity of a deck, I scrapped that idea. Let's just say that this deck breaks virtually every rule of deckbuilding - and plus which, the nice folks at Wizards gave us some slightly more functional decks to toy around with. Decks like this:

I chose to start with Reality Fracture because it focuses the most on the new mechanics of Time Spiral - in this case, suspend. Suspend is a really interesting ability, because it has multiple game play implications.

2) Suspend allows you to store up cards for future consideration. Take, for example, Rift Bolt. Let's say my opponent casts Llanowar Elves. I suspend Rift Bolt, and it changes my opponent's choices. Maybe they were going to drop Ohran Viper. If they do, then it will surely get fried by the bolt. If they don't, that's one less Elf they'll have.

3) Suspend works really, really well with storm. When you remove the last suspend counter from a card, that's when it counts as "being played." This allows the Reality Fracture deck to set up some really big turns, in which multiple cards become unsuspended at once, and then a storm spell (Empty the Warrens, Grapeshot, Ignite Memories) copies itself five or six times. Good stuff.

Let's take a look at the contents of the Reality Fracture deck, so we can understand what makes it tick.

For a deck that relies half on suspend and half on storm, this deck is awfully light on suspend creatures. There's only eleven here, and they don't even seem to be the right eleven. Errant Ephemeron is almost always better than Viscerid Deepwalker, and Pardic Dragon can be kept out of play by an opponent who plays, you know, spells. Unfortunately, Greater Gargadon is the only other Suspend creature in red or blue not represented in this deck. (Note to everyone: Ith does not count.) I'm sure that if I evolve the deck towards the suspend theme, this configuration of creatures will change.

All right, here's the problem - the support creatures in this deck are on the essive side of depressive. Jhoira's Timebug makes a lot of sense in this deck - it helps you accelerate all of your suspend cards by a turn (or push them back, if you want to delay them for some reason - like if you have a Riftwing Cloudskate about to come into play and your opponent has no creatures). The other four creatures are dubious at best.

Clockwork Hydra, Giant Oyster: Both of these are designed to work with Clockspinning. The problem is, Clockspinning is mainly here for Suspend, and the effects of Clockwork Hydra and Giant Oyster are both underwhelming. Moreover, Giant Oyster needs to have a tapped creature to work. There's no ways in this entire deck to artificially tap a creature. Is there an Icy Manipulator in the house? Mangara, did you bring your Amber Prison? Anyone?

Am I playing to a dead house in here?

Coal Stoker is a neat trick to use to improve your storm count...but if you aren't going to storm, chances are you're getting a Hill Giant with three points of mana burn. If I wanted that, I'd play Serpent Warrior.

Sage of Epityr helps you set up your draws, but doesn't necessarily have anything to do with either storm or suspend. However, since setting up all your suspend spells in the early game can help allow for one huge storm-count turn, the Sage helps there.

These all seem fine, except for Ground Rift. I wouldn't play Panic Attack in a constructed deck, and I definitely wouldn't play a bad version of Panic Attack. I'm going to play a few games with this deck to get a feel for it, but Ground Rift does too little for its effect. If I wanted to remove all blockers, I'd just kill or bounce them. For the love of Pete, I'm playing blue and red! It's not like blue and red have problems getting rid of guys on the board. This isn't green/white, fellahs!

Claws of Gix is in the deck solely to pump storm count, since you can drop it for free. It might as well read "

: All your storm spells storm for one more." Clockspinning works with counters (as in on permanents or on suspend cards, not as in counterspells, which are noticeably missing from this deck in any way, shape or form), Serrated Arrows is just good, solid creature kill, Rift Bolt is missing three other copies, and Whispers of the Muse and Careful Consideration are random blue card drawing spells thrown into the deck for good measure. 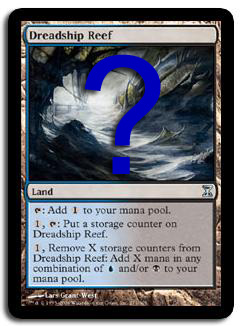 Do not like. Dreadship Reef? I don't see an X-spell in this deck - why is a half-off color land in a deck that tends to not need extra mana thanks to suspend? Also, there are 23 blue-mana symbols in the costs of spells in this deck, and 17 red. Of these, many of them need to be online by turn two (the suspend cards), so if a deck ever needed a Gemstone Mine, it's this one. (Why is that in the Sliver deck and not this one? Woulda worked well with Clockspinning, folks!)

In short, this deck wants to suspend a bunch of guys, time them so they all come into play around the same turn, and then hit large storm counts. Unfortunately, the wrong quantities of each suspend creature are in this deck, the support spells and creatures are pretty awful, and there's too little theme (Jhoira's Timebugs and Clockspinning) and too much chaff (Ground Rift, Clockwork Hydra, Claws of Gix).

I don't expect the first few practice games to be pretty.

Ha ha, funny - my first practice game with the non-modified Reality Fracture deck is against a modified Reality Fracture deck! I mulligan a one-land hand. On my first turn, I suspend a first turn Viscerid Deepwalker, and on the second turn, Keldon Halberdier. He suspends Wheel of Fate and then drops a lot of mana artifacts (Prismatic Lens, Izzet Signet) and Confiscates an Island. I respond by Clockspinning my Halberdier and throwing Riftwing Cloudskate into the aether. The Halberdiers and Viscerid Deepwalker come into play and hit him, and I suspend Rift Bolt.

Wheel of Fate goes off, and he Remands the Cloudskate (but why? He has no creatures!) and then suspends Deep-Sea Kraken. He steals two more lands, leaving me with one. I play Sage of Epityr, get a second land, and suspend Riftwing Cloudskates on consecutive turns. He Electrolyzes the Halberdier and Confiscates the Deepwalker. I drop Claws of Gix (which would have been good against all his Confiscating/Annexing action), land my first Cloudskate (returning the Deepwalker back to my hand), and then eat Pyroclasm.

I get my third mulligan in three games, as I have only one land in my opening hand. I get stuck at two lands for the entire game, and I die to a horde of Guildmages and Saprolings with a hand of double Grapeshot, Giant Oyster, and Serrated Arrows.

This time around, I draw eleven lands and four spells. Two of those four spells get hit by a pair of Rise // Fall, and my two guys die to a hail of burn.

I suspend Errant Ephemeron on turn two, and Riftwing Cloudskate and Viscerid Deepwalker on turn three. He casts turn-three Sunforger and turn-four Lightning Helix (at me) to allow for a 3/3 Scab-Clan Mauler, and then he smacks me for 7 on turn five, bringing me to 10. I play Clockspinning with buyback on my Cloudskate, getting the Mauler off the board. I finally draw my first Mountain of the game that turn, I Clockspin Errant Ephemeron into play, hit him for 6 hasted damage, and then cast Empty the Warrens for eight. This draws a concession.

Although I ended up with a winning record, I had to exercise all my self control to keep from heaving my keyboard across the room. Although there is some luck involved in Magic, I completed five straight games where I had mana problems in each and every game. The above games involved three mulligans, one land flood, and four games where I didn't draw a second color of mana until past turn four. Mana issues take any fun out of the game, since you literally sit there not being able to play spells while your opponent wails on you.

The first change I made to Reality Fracture was to add in four Izzet Boilerworks. These would smooth out the mana a lot and would keep me from having as many lack-of-mana issues in future games. To make room for them, I took out the Dreadship Reef, two Islands, and a Mountain.

I also wanted to play around more with the cards which allow my suspended guys to resolve earlier, so I added in two Jhoira's Timebug and took out a Clockwork Hydra and a Ground Rift. I didn't want to fiddle too much with the deck, since my mana issues had prevented me from really seeing the deck in full action. What I did see showed a lot of potential - huge turns with multiple suspend cards resolving at once, resulting in 5-6 Grapeshots, 12-20 damage from Ignite Memories, or 8-12 Goblins coming into play at once.

Join me next week as I continue to evolve the Reality Fracture deck - with 300% more Rift Bolts, guaranteed.