he full Dark Ascension spoiler is up! Today, I'd like to discuss some of the most exciting interactions I've found with the new cards. A lot of you are probably excited about fateful hour and undying. I'm going to help find the best home for these mechanics in Constructed. I am also going to discuss some of the more interesting combos available involving cards from Dark Ascension.

Undying is similar to persist, but it adds +1/+1 counters rather than -1/-1 counters. I suspect a lot of the undying cards will make a huge impact on Constructed. A card like Geralf's Messenger is absurdly powerful in a vacuum. If its mana cost weren't so prohibitive, it would be better than Kitchen Finks. 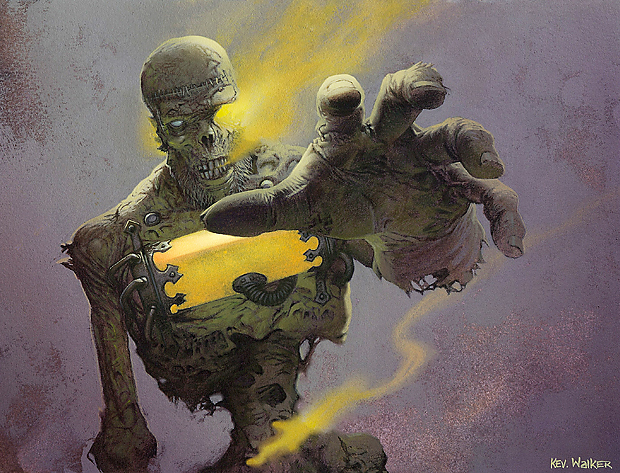 Perhaps the most impressive application for undying is alongside Birthing Pod. This has been discussed but I'm not sure if everyone truly grasps how strong this interaction is.

For example, you might sacrifice a Vorapede to your Birthing Pod and go fetch up a Reaper from the Abyss. You just turned your five-mana creature into 12 points of power over two bodies, plus a targeted removal spell. Things get even crazier when you consider that you can grab a Vorapede by sacrificing a Solemn Simulacrum.

Strangleroot Geist might be the most powerful of all the undying cards, and I'm looking forward to the green stompy decks many will be trying in the coming weeks. These green decks will have a lot more resilience than people expect them to. Garruk, Primal Hunter will fuel these decks with a massive amount of card advantage. Cards like Dungrove Elder will make cards like Oblivion Ring look embarrassing. Meanwhile, all the undying creatures will laugh in the face of mass removal. Green stompy decks will even have access to Dismember, giving them a big leg-up on their brethren from the past.

If you're a casual Johnny, you might want to experiment with Cauldron of Souls and the undying mechanic. Cauldron of Souls makes any undying creature into quite the nuisance. Unfortunately, it's expensive and a bit clunky, so it might be an idea that's exclusively for the kitchen table.

Dark Ascension might be the extra boost that some of the tribal decks needed to make it into the competitive scene. The Standard Zombie pool was very small before Dark Ascension, but it's looking like a mono-black Zombie deck could be very competitive with cards like Gravecrawler and Geralf's Messenger.

Werewolves had a bit of success in Standard last fall, but Dark Ascension gives us the most powerful Werewolf yet, Huntmaster of the Fells.

Fateful hour is a new mechanic that gives cards additional effects if the controller is at 5 or less life. Gather the Townsfolk and Thraben Doomsayer look like the most appealing of the fateful hour cards. Meeting the condition for fateful hour is very dangerous against red decks, and it usually helps to choose the exact moment when your life total plummets against everyone else.

I propose using Hex Parasite and Trinket Mage (to find Hex Parasite) as a means to control your fateful hour cards. For example, imagine a game where you have a few 1/1s and a pair of Thraben Doomsayers. Your opponent is winning the race in the air. You draw a Trinket Mage, search for a Hex Parasite, and put your life total at 5 or less. Suddenly, your army of 1/1s is now a stampede of 5/5s.

To maximize the potential of a deck like this one we're going to need some token production, but we're also going to need to give our Trinket Mage more value. Invisible Stalker is one of the most impressive creatures from Innistrad. Attaching a Silver-Inlaid Dagger to Invisible Stalker makes it a very fast clock that most opponents will struggle to deal with or race. Trinket Mage conveniently searches for Silver-Inlaid Dagger.

Gather the Townsfolk is really nice here. Raise the Alarm is a fine offensive spell, but the fateful hour clause is very relevant when we have access to Hex Parasite. Dealing with two 1/1s and dealing with five 1/1s are completely different games. Your opponent will be forced to have a board-sweeping effect immediately or get run over by your horde of soldiers.

I previewed Lingering Souls last week and I still can't shake how good the card is. I'm stretching a bit to fit this one here, but I figure the flashback doesn't need to be played until later on and the deck has Ponder and four copies of Evolving Wilds to find our swamp. This card would be an obvious and easy inclusion if we decided to play some rare lands in our deck. 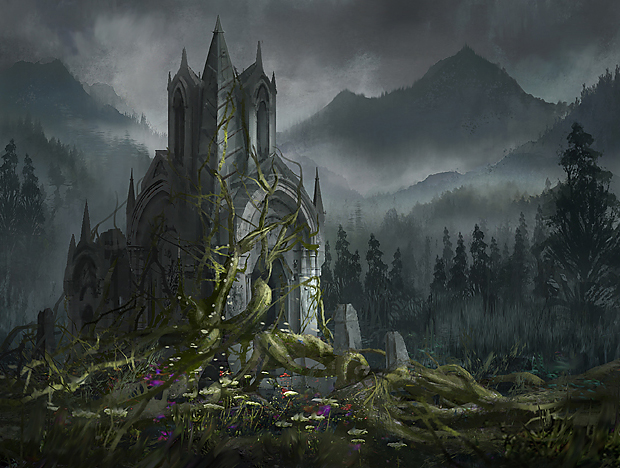 Thraben Doomsayer can act like an Overrun effect here, but it's also worth noting how strong it is before fateful hour. A body is often considered to be worth at least half a card, and this gentleman makes one every turn. The cluttered board that Thraben Doomsayer helps you achieve is ideal for a Hex Parasite to come down and allow your swarm to attack for some really big damage.

The synergy between specific cards in the current Standard format makes me play Ponder in just about every blue deck I build. Ponder helps us set up our Invisible Stalker draws, smooths out our mana, and ensures that we curve out properly. 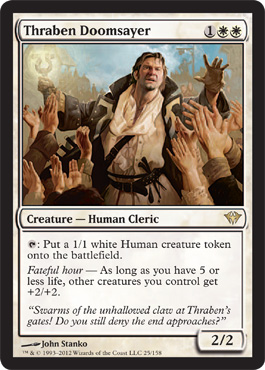 Oblivion Ring is a nice catch-all that can save us from any game-breaking permanent.

Hex Parasite is excellent when it comes to turning on fateful hour, but it's also a very effective answer to planeswalkers and Ratchet Bomb. Drawing multiple copies of Hex Parasite is usually pretty bad. I'm only going to play a few of them and search them up with my Trinket Mages.

I cannot begin to explain how excited I was when I saw Evolving Wilds was being reprinted. Building on a Budget has been in a strange spot for the past few months where there were no uncommon or common mana-fixing lands. Evolving Wilds reprinting means you'll be seeing a lot fewer rare lands in my decklists. 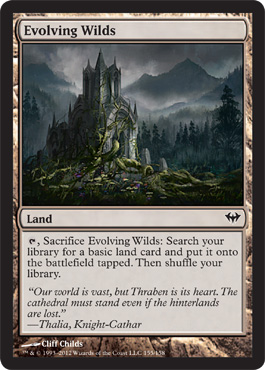 Midnight Guard is going to be a sleeper favorite for the casual Johnny. Sure, it looks like a three-mana 2/3 with a weird version of vigilance. Look deeper, though. Midnight Guard has an exceptionally strong synergy with a number of different Modern-legal auras. Imagine slapping a Presence of Gond onto this gentleman. Suddenly, you're working with an army of two billion Saprolings. Elemental Mastery works the same way, only it kills your opponent immediately. Auras that allow Midnight Guard to tap and create creature tokens allow you to go infinite. 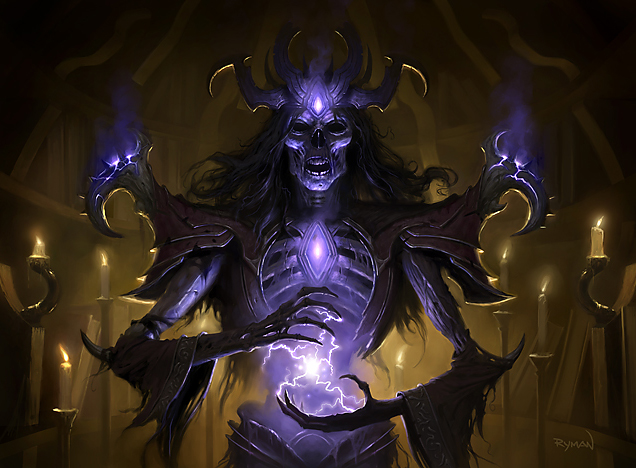 Necrotic Ooze has a tremendous amount of synergy with Havengul Lich. It becomes very difficult for an opponent to grind out a long game once you've found a copy of both these cards. I'm not going to go as all-in as I could on Necrotic Ooze; I'm only going to use it for its synergy with Havengul Lich. If you're looking to make a deck that's more dedicated to the ooze, then I suggest taking a look at Noel deCordova's column that I mentioned above. His deck chooses not to play with Necrotic Ooze, but there are a ton of activated abilities in the deck and Necrotic Ooze could make an excellent addition.

Perilous Myr is essential to our late-game-combo plan. We need to find at least one copy of Perilous Myr in order to set up our machine gun. Perilous Myr is also an incredibly strong defensive creature to play on the second turn. Aggressive decks have a difficult time when you drop this speed bump in the way of their onslaught. An aggro opponent is usually forced to leave 1-toughness creatures at home for an attack step and you're still going to be able to trade with bigger ones.

Mana Leak is one of the best spells in Standard. It fits very well into a blue-black deck that's trying to set up a strong late game. Some might believe that Think Twice would be better than Divination because we're playing Mana Leak, but the mana investment required to acquire two cards from Think Twice is too inefficient when you're working with a card like Heartless Summoning.

Ponder is an absolute must for this deck. It increases our chances of having an early Heartless Summoning, it helps us assemble our combo, and it helps us find key defensive spells like Massacre Wurm or Black Sun's Zenith at exactly the right moment.

Black Sun's Zenith is going to be a necessary tool when cards like Lingering Souls are unleashed on the Standard format. It seems like this deck would get run over by opponents' best draws if we don't have access to a few copies of Black Sun's Zenith. 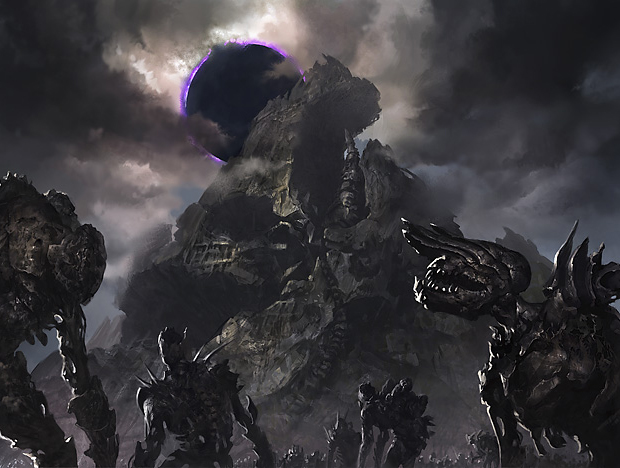 A few more spot-removal spells help ensure we make it to the late game.

If you've been a fan of Heartless Summoning and haven't gotten a chance to try it seriously yet, then I strongly recommend putting this deck together after Dark Ascension is released. The deck is quite exciting, operating as a control deck in the early game and a combo deck in the late game.

That concludes my first stab at Dark Ascension. I might revisit these decks in the coming weeks when we have more concrete knowledge of the format. Be sure to email me or hit the forums with any questions, comments, or exciting ideas for future columns.

Remember, the Dark Ascension Prereleases are this weekend! Prereleases are an excellent opportunity to dip your toes into tournament Magic. The atmosphere is usually very relaxed and most players are simply excited about their chance to play with the new cards; this makes the Prerelease an excellent place to do some Magic networking and find other local players. Prereleases also present players with a unique environment where they can trade for cards that haven't even been released yet. Be sure to find a Prerelease near you so you can be one of the first to play with Dark Ascension!