elcome to the first week of Innistrad previews here on DailyMTG.com! Stay tuned for all the exciting new preview cards being revealed each day.

I remember when Visions came out. All the other mages at school were excited about cards like Archangel and Relentless Assault. I had more devious plans, though. Nekrataal looked like a really good card to me. All the kids at school played with cards like Crash of Rhinos. I remember trying to explain why it was so good to my schoolmates: "You kill a creature and end up with a creature. It's like you're playing a creature and a Terror in the same card." 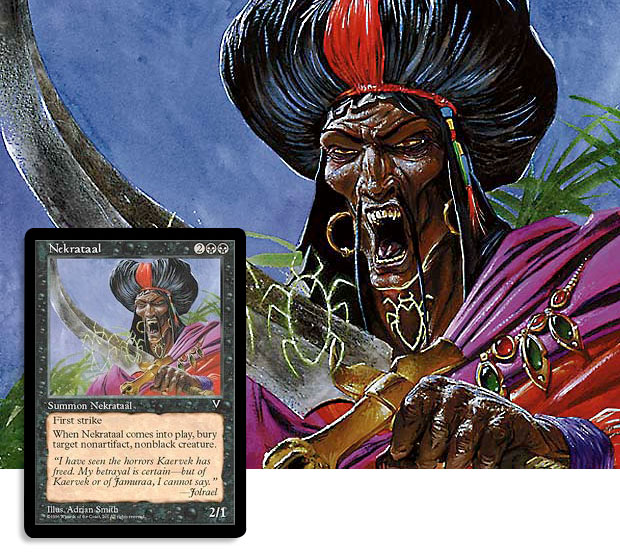 At first, none of them believed me. They would complain that a 2/1 with first strike was too small to matter by the fourth turn. It took about three games with any one of them to convert them to playing with Nekrataals of their own. In fact, everyone played black to the extent that cards like Nekrataal and Terror almost became bad. The only nonblack creature that anyone would dare to play was Autumn Willow.

Nekrataal was the first generation in a long line of creatures that kill something when they enter the battlefield. Cards like Bone Shredder and Flametongue Kavu were staples in Constructed and absolutely brutal in Limited play. The ability to gain card advantage and tempo through a single spell was brutally powerful.

Then Torment was released and we all got a glimpse at a new type of Nekrataal... 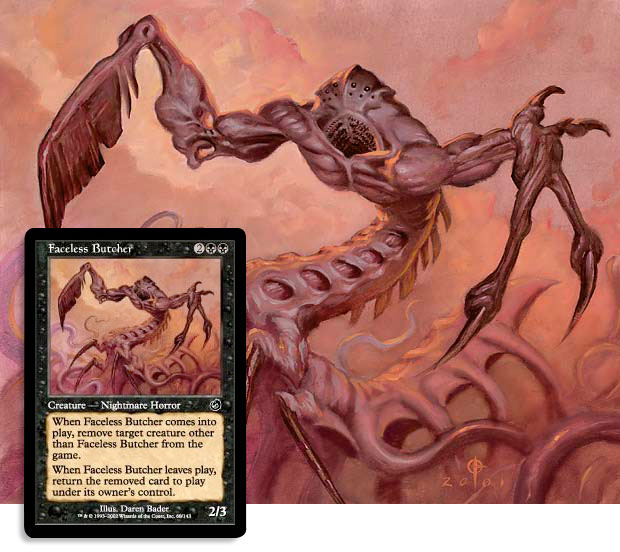 Faceless Butcher also had the ability to outright kill any token that your opponent might create. Roar or the Wurm was popular at the time, and people quickly picked up on Faceless Butcher's strength in battling the 6/6 tokens.

These are valuable tricks to have in your back pocket when playing with Innistrad. Why is that?

Innastrad is a world of Werewolves, Vampires, Spirits, and Zombies. Horrific creatures stalk the shadows waiting for their next victim. Fiends, preying upon the innocent, leave humans in a state of panic. There are those who fight back, though—those who hunt the things that go bump in the night. 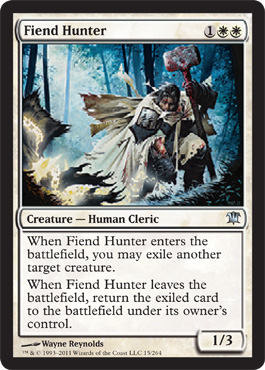 A white Faceless Butcher with one less power that costs one less mana? Seems pretty good to me!

In Limited games, remember to hold Fiend Hunter in your hand as long as possible unless you're trying to run over someone. By waiting a long time, you get more value out of Fiend Hunter by destroying a larger or more powerful creature. Waiting also gives your opponent more opportunities to cast removal spells. Fiend Hunter isn't that exciting if it just gets killed immediately.

This is obviously going to be a very high pick in Limited play, but what are some of the Constructed applications of this card?

It could be used in a Modern Momentary Blink deck. Momentary Blink is a card that just begs to be built around. It's exceptionally powerful when you include it in a deck with cards like Venser, Shaper Savant, Mystic Snake, Mulldrifter, Reveillark, and the latest addition to its arsenal, Fiend Hunter. Reveillark also seems to combo nicely with Fiend Hunter.

In Standard, this card does an excellent job trumping Blade Splicer, one of the most powerful creatures from Scars block.

This card is an uncommon, so it shouldn't be difficult to acquire four of them. Its ability may not seem powerful when you look at it through the lens of the current format, where a lot of matches look like an Alfred Hitchcock movie—only these birds have swords. However, Squadron Hawk will no longer be a part of the Standard format once Innistrad is released.

We're still unsure of the new Standard landscape, but I don't think anyone would be surprised if a deck like Tempered Steel became the deck to beat in Standard. If that's the case, then Fiend Hunter will be a lot more powerful than you might expect.

The deck that will likely be most excited about Fiend Hunter is Birthing Pod. Previously, the Birthing Pod decks have had trouble dealing with creatures before they could ramp to Inferno Titan, Frost Titan, or Elesh Norn, Grand Cenobite. The deck has no problem dealing with cards like Wurmcoil Engine or Titans once you include one or a few copies of Fiend Hunter.

Fiend Hunter allows you to make a lot of strong plays that may not seem obvious. For example. Let's say your opponent has 5 life remaining and you have a ton of creatures on the battlefield, including a creature with 5 or more power. By casting Fiend Hunter and removing the creature you control with 5 or more power, you've just made things substantially worse for your opponent. Day of Judgment won't deal with the problem, because the 5-power monster will simply come back if they cast their board-sweeping spell.
Fiend Hunter is also excellent against effects like Mind Control, Enslave, and Volition Reins. Your opponent will have just spent a lot of mana for a two-for-one, but Fiend Hunter gets rid of whatever powerful creature your opponent took away, and it threatens to return it to the battlefield. This works especially well if you're playing powerful Equipment cards like Sword of Body and Mind, Sword of Feast and Famine, and Sword of War and Peace. If you can somehow make the Fiend Hunter into a credible threat, then your opponent will probably be forced to use a removal spell on it. 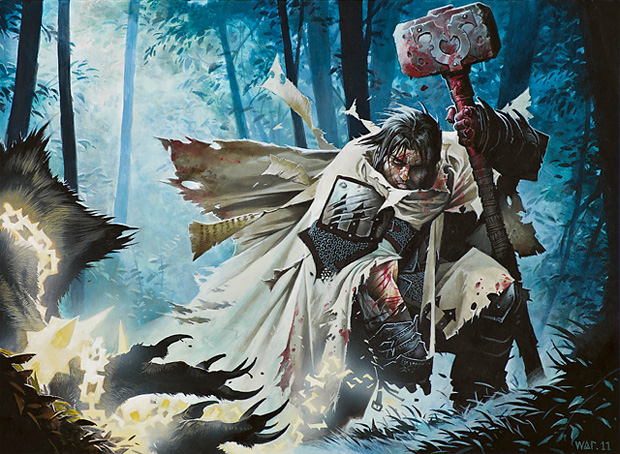 Fiend Hunter is a powerful creature that gives you a ton of room to outplay your opponent. The card is always powerful, but with careful play it can often be the turning point of a game. Expect to see this card winning games all over the room at the Innistrad Prerelease. The Constructed applications of this card are largely dependent on the rest of Innistrad, but I'm confident we'll be seeing this one in 60-card decks in the not-too-distant future.