Before we get started, I will say that this article is a little truncated due to two major factors, the first being that I just spent the entire last week at the U.S. National Championships for Magic: The Gathering, working the StarCityGames.com booth with Ken Adams and Wes Moss. The second? My wife Kate and I just celebrated our one-year anniversary yesterday (I love you Kate!), so I didn't have as much time as usual to work on this article. Do not fear! Next week's article will finish up the green evolution, and do the entire red evolution at one time—it'll be a supersized BoaB extravaganza!

All right, so onto the deck! I took my handy-dandy spreadsheet of budget rares, and rolled my random numbers on random.org to randomly select from the following list:

Here's what I ended up with!

Since I want the maximum exposure for the rares in this deck, I re-rolled the three duplicate rolls.

1 Magus of the Candelabra 1 Wurmcalling

I get down Utopia Tree, Wort, the Raidmother, and Stone-Tongue Basilisk against tefus's double Coiling Oracle. He plays Wrath of God, and then plays Tunnel Vision on himself, naming Living End. Unfortunately for him, the Living End in his deck is the 4th from the bottom card, and he mills away both of his Clockspinnings. I drop Rhox and Spike Tiller, make two of my lands 3/3 creatures, and kill him within two turns.

Keys to the game: After he cast Wrath of God, I left up mana for Spike Tiller, so I could make him kill his own lands if he Wrath of Goded again. Bad Tunnel Vision!

We go back and forth on creatures for a while, with Chadskee dropping some smaller elves (plus a Moonglove Winnower), and me using Immaculate Magistrate to pump my midrange guys. I get down Nature's Will plus Upwelling, allowing me to store up a truly massive amount of mana for Nourishing Shoal, keeping me from ever having a chance of dying. I finally drop Sekki, Seasons' Guide, which gets around his deathtouch creatures (since it prevents damage to itself), and combos great with Immaculate Magistrate (which can make sure it keeps coming back). He eventually dies to a horde of 1/1 Spirits plus Sekki, Seasons' Guide itself.

Keys to the game: Deathtouch only triggers when damage is dealt, so Sekki, Seasons' Guide was the way I was finally able to get through his wall of Winnowers!

I could tell you about what happened during this epic game, but in this case the screenshot really is worth a thousand words. 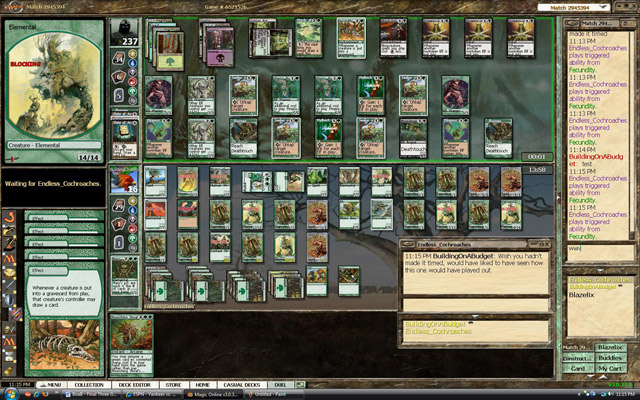 I wish we'd been able to play this out, ya know?

Keys to the game: After the game, Endless_cochroaches says that he had multiple Viridian Longbows that he never drew. He'd need to get two in one turn to slip it past Glissa, at the cost of eight mana: one to play the first, three to equip it (I destroy it in response), one more to play the second, and three more to equip it.

Out: Kodama of the Center Tree, Wort, the Raidmother, Magus of the Candelabra, Force of Savagery, Utopia Tree
In: 3x Devoted Druid, 2x Kamahl, Fist of Krosa

I get stalled on three mana for a little bit, and have to trade Isao, Enlightened Bushi with Selesnya Guildmage when offered the trade, without enough mana up to regenerate. He drops Safehold Elite and Watchwolf, backed with Mutavault. I put down Immaculate Magistrate and then Emperor Croc, hoping to stave off his attack. He gets down Wilt-Leaf Cavaliers, and then enchants them with Shield of the Oversoul. Even though I get Rhox and Nature's Will in the next couple of turns (ensuring I can double my mana each turn), I can't outrace his 6/7 flyer.

Keys to the game: I had no way to deal with an enchantment, which is very much "not green" (green should easily deal with both enchantments and artifacts). The question is: which enchantment destruction spell would I want to add to this deck? Signs point towards something like Indrik Stomphowler, to keep up the theme of midrange to huge fatties that has been doing well so far.

Sennin_pl starts the game early with Carrion Feeder and Festering Goblin. My first play is on turn five, when I get down a 1/1 Wurmcalling token (with buyback). He sacrifices his Festering Goblin, swings for two, and cycles Gempalm Polluter. I drop a second Wurmcalling token the following turn (2/2), and he answers with Lord of the Undead. I continue dropping creatures, the first two of which are met with Dark Banishing, but I finally get to stick Spectral Force (great against mono-black!) and Kamahl, Fist of Krosa, against Undead Warchief and Soulless One. Finally, sennin_pl goes all in for the attack, as I am tapped out, and he has lethal damage on the board even through my blockers. As I put damage on the stack... I pitch Patron of the Orochi from my hand to gain 8 life from Nourishing Shoal, setting sennin_pl back quite a few turns of development!

I then get down Spike Tiller and Stone-Tongue Basilisk, and sennin_pl starts rebuilding with another Lord of the Undead (bringing back the first), a Gravedigger, and Call to the Grave. I drop Plated Slagwurm, and then use Loaming Shaman to dump all of his zombie cards back into his library. I then start activating Kamahl on each of our turns, targeting his lands on his upkeep (so he has to sacrifice them to Call to the Grave) and targeting mine on my turn (so I can lose my least important resource). After a couple of turns of this, I finally hit seven cards in my graveyard for threshold, allowing me to swing with my entire team. That means Stone-Tongue Basilisk can kill all five opposing creatures in one fell swoop, while the rest of my creatures get +3/+3 thanks to Kamahl, finishing the game in a single turn!

Strangely enough, this deck has worked the absolute best (out of the gate) so far out of the three rare-centric decks! The assortment of large fatties (many of which have been good to have in different situations) has worked well, and I have the ability to just turn the game around by dropping huge creature after huge creature mid-to-late game. Do I want to focus on Nature's Will and creatures like Rhox and Thorn Elemental? Would it be better to have utility fat (Patron of the Orochi) or huge beaters (Plated Slagwurm)? Do I need more artifact and enchantment kill? Tune in next week to see the big finish to the evolution of the Final Three: Green deck, and the full evolution of the Final Two: Red deck! See you in 7!