rerelease weekend for Magic 2012 has come and gone. The latest core set has a number of new cards worth getting excited about. Today, I'd like to revisit my Fresh Meat deck. My original Fresh Meat list was tuned to deal with the overwhelming amount of Equipment in Standard as a result of Stoneforge Mystic. The deck has an opportunity to make itself much more dedicated now that everyone's (least) favorite two-drop has exited the format. 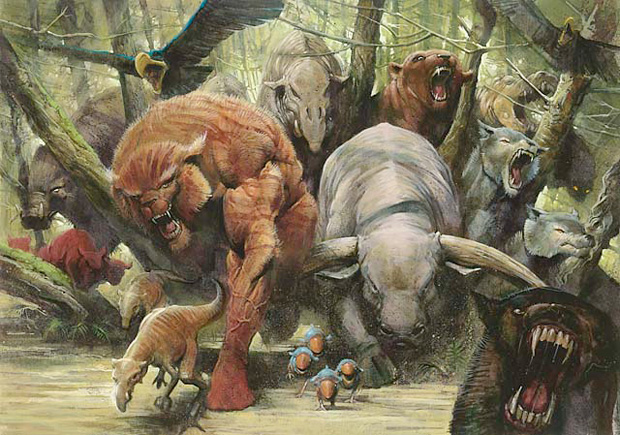 Overrun was reprinted in M12. This may seem like a relatively normal uncommon, but Overrun is exactly what the Fresh Meat deck needed to push it over the top. Overwhelming Stampede was clunky and gave opponents the chance to get a huge advantage with a well-timed removal spell. Overrun can make a board cluttered with "useless" 0/1s into a lethal swing.

I received an email earlier this week from Philip, a rogue deckbuilder from Denmark. Philip was working on a red green version of the Fresh Meat deck that used Warstorm Surge to potentially combo his opponent to pieces. I put together the following list and played a few games with it:

The deck was capable of winning games out of nowhere. In one game, I was stuck on four lands, but I had six Eldrazi Spawn tokens on the battlefield from an Awakening Zone and a few Spawn-producing creatures. I sacrificed all my tokens and had six colorless mana in my pool. I tapped all four of my lands and cast Warstorm Surge followed by Fresh Meat. My opponent took 18 damage, and we were off to the next game.

After a few games I wasn't very happy with Warstorm Surge in this type of strategy. It seemed to do less than Eldrazi Monument or Overrun, but it costs more mana. I really liked the idea of playing a combo deck based on the new and improved Pandemonium in Standard, but I think I may have been approaching that deck from the wrong angle.

I'll revisit Warstorm Surge in the coming weeks. Perhaps I need to splash blue so I have access to Ponder and Preordain. Once I add blue I could easily see myself including the Mass Polymorph package of Massacre Wurms and Terastodons.

This week, I'd like to continue to focus on an aggressive Fresh Meat deck for the new Standard. While Warstorm Surge seemed lackluster, I was very impressed by Emrakul's Hatcher. I've also been desperately seeking a way to make the mono-green version of this deck beat a Grim Lavamancer. Playing red gives me access to inexpensive spot removal after sideboarding. I'm also very pleased that I can play Raging Ravine in the deck.

If you had a chance to play with my original Fresh Meat deck, then you probably remember how much you wish you had creature-lands in the original deck. Raging Ravine gets very large at a very fast pace and had the ability to steal games after a timely Day of Judgment. This Worldwake land is a lot easier to acquire than it used to be. You shouldn't have too much trouble trading for a playset.

After finding the right mana creatures, we want token production. We'd prefer to produce Eldrazi Spawn so we can combo them with our Fresh Meat. Nest Invader and Kozilek's Predator are obvious choices. Adding red to the deck gives us Emrakul's Hatcher, one of the best cards for this deck. Awakening Zone was very good back when everyone was playing Caw-Blade, but now it seems slow in a format defined by fast combo and red decks. I still like the concept of Awakening Zone in this deck, so I've decided to include two copies.

Fresh Meat is a Swiss army knife in this deck. You can sacrifice a bunch of Eldrazi Spawn for a huge burst of power. You can use it to punish people for casting a board sweeper like Day of Judgment. It's also an excellent combat trick. Attack with all your non-Spawn very aggressively and wait until your opponent makes a big attack. Your Fresh Meat should allow you to eat most of the opposing board.

Now the deck needs Overrun effects. Lucky for us, Overrun was just reprinted in M12. This is the perfect deck to play a full four copies of the classic uncommon. Beastmaster Ascension was always powerful in this type of deck, but it was always terrible when you drew more than one copy. Having access to Overrun means we get to ensure that we never draw more than one Beastmaster Ascension. We achieve this by only playing one copy of the enchantment. I want six cards that function this way. I'll include a single copy of Eldrazi Monument to act as a fifth Overrun.

Here's the deck list once I crunch all the numbers.

If you're unable to find Copperline Gorges, you can simply replace them with Mountains or Kazandu Refuges, but they should not be too difficult to trade for. The rest of the deck shouldn't be difficult at all to acquire.

This deck looks like it's very weak against the modern red decks. Remember, Magic 2011 doesn't rotate until Innistrad is released in October, so red has access to Lightning Bolt, Incinerate, Grim Lavamancer, Searing Blaze, Goblin Guide, and much more. It almost feels like you're playing against a legacy deck when you encounter them. Because of this, I've decided to include a lot of cards in my sideboard for that match-up.

The deck may also have trouble with Splinter Twin decks. These decks can race you, and you have to be as aggressive as possible. Including a playset of Dismember in the sideboard can be huge here. With your Eldrazi Spawn you won't even need to leave any lands untapped to cast your Dismember.

I played a few games against some people's decks for the post-M12 metagame that I'd like to share here. 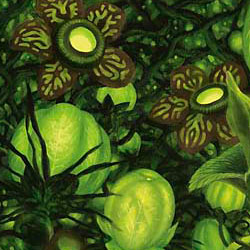 I drew an Overrun, played a Forest, attacked for 2 with Nest Invader, cast Emrakul's Hatcher, and passed the turn. My opponent cast an Explore, followed by two lands, and then cast a Cultivate and passed the turn with five lands on the battlefield. I showed him the Overrun, and he conceded to the 23-damage attack that was coming his way on the fourth turn.

This isn't too unusual for this type of deck. Overrun lets us play a very aggressive game where we can kill our opponents as early as the fourth turn (as demonstrated). 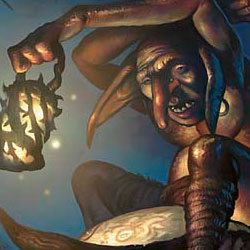 Red can be a tough match-up. The Overrun effects are significantly weaker here because of how many creatures they kill. I'd take out all six Overrun effects, the Awakening Zones, and two Joraga Treespeakers to bring in Leatherback Baloths, Brindle Boars, and the last two copies of Lightning Bolt. That should help the match-up enough.

I apologize for the short game reports, but it's difficult to find people to play games of M12 Standard with. Once the new set is on Magic Online I will be able to bring you in-depth match reports again. If you haven't found a deck that interests you in the new Standard and you've always liked swarm green decks, then this is certainly the right deck for you. This deck is fun, powerful, and consistent. It's capable of very interesting plays that will make for good stories and better match result slips.

Make sure to look up the location of Magic 2012 Launch Parties in your area this coming weekend. The new set is filled with powerful and interesting cards. I had the (mis)fortune of playing against a deck with the new Garruk, Primal Hunter and multiple Overruns last weekend. If it hadn't been for those games, then I probably never would have thought to write about this deck!

Launch Parties are also your first opportunity to buy the new cards. The buy a box promo for M12 is probably the most exciting ever. Chandra's Phoenix is sure to give decks like this green one fits. It's incredibly strong against control and aggro alike, and the alternate art foil promo is pretty awesome if you haven't seen it yet. 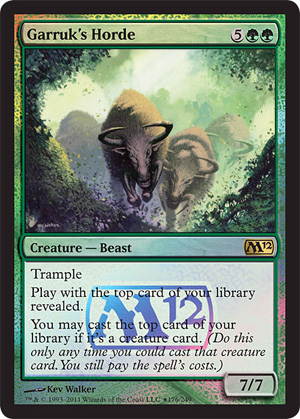 As always, I appreciate your emails. I'll be more than happy to look at your latest M12 creations and offer a bit of feedback.

Good luck at your Launch Parties this weekend, and happy brewing!