nce upon a time, there was a Wall that saw play in every format. It has been a kitchen table favorite, a nice piece of PTQ tech, an excellent Cube addition, and even the unsung hero of Pro Tour–Los Angeles in 1998. It's still one of my favorite cards ever printed. That Wall is Wall of Blossoms. 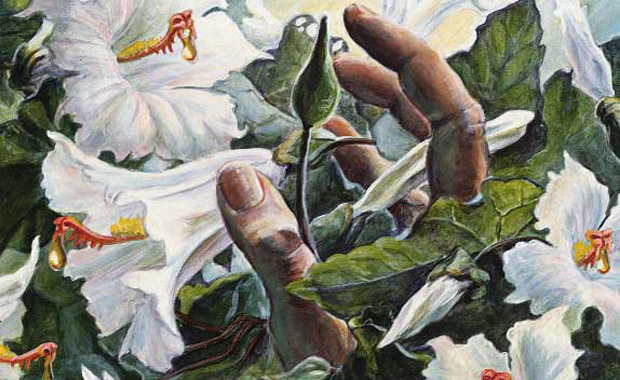 Wall of Blossoms is such a powerful card that it continues to see play in Legacy. Check out this deck that Grand Prix Oakland champion, Matt Nass, used to top four the Star City Games Legacy Open tournament earlier this year:

I almost fell off my chair when I saw this week's preview card. Wall of Blossoms is good, but this card is even better. Let me introduce you to Wall of Omens: 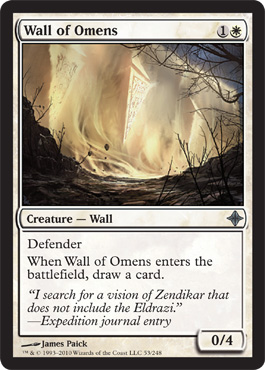 I could go on forever about how awesome this card is.

White is the best color for a spell like this. Wall of Omens forces opponents to commit more threats to the board. A player packing white cards may cast a haymaker Day of Judgment or Martial Coup when an opponent drops a whole slew of creatures to bash through the wall.

Players unfamiliar with Wall of Blossoms may wonder why this is such an advantage. Wall of Omens replaces itself when it comes into play. If I have six cards in my hand and successfully cast a Wall of Omens, I will have six cards in my hand after its trigger resolves. My opponent, on the other hand, will need to cast a second creature to get through the wall. My opponent could decide to use a removal spell on the Wall of Omens, but this is certainly a losing proposition from across the table. My opponent needs to spend a card to destroy something that was essentially free in terms of card advantage for me.

White used to be widely considered the worst color in Magic. You wouldn't know it these days, though. It seems that for every powerful strategy that comes out of R&D, white has the answers. White has Path to Exile as an answer to the Worldwake creature-lands and other powerful attackers. White has Baneslayer Angel as an answer to any deck that is not playing black or white. Jund, the terror of Standard, meets its match in Wall of Omens.

Wall of Omens is an excellent tool for fighting Jund decks. Casting a Wall of Omens forces a Jund opponent to remove it. None of Jund's non–Broodmate Dragon creatures can successfully make it through the Wall. The moment a Jund player uses a turn and a card to deal with a card that cost you nothing, you're in great shape. Jund wins most of its games by accruing incidental card advantage with Bloodbraid Elf, Bituminous Blast, and Blightning. Wall of Omens beats Jund at its own game.

White-blue decks in Standard have been playing with Spreading Seas. Spreading Seas is a cantrip that provides a bit of disruption. Wall of Omens seems like an obvious upgrade. Having a cantrip blocker is huge. Wall of Omens usually demands a card from an opponent. This type of card advantage is exceptionally powerful. This is a pretty relevant upgrade as a white-blue deck.

For example: I'm on the play, and I pass the turn after playing a Celestial Collonade. My opponent casts a Goblin Guide and attacks me for 2. I untap, play a land, cast Wall of Omens, draw my extra card, and pass the turn. Let's say my opponent decides to keep pressure on me and attacks into the Wall of Omens. I block, and my opponent finishes off the Wall of Omens with a Burst Lightning and passes the turn. How much of an advantage did I gain there? On my third turn I will have three lands on the battlefield and at least six, perhaps seven, or even eight cards in my hand, depending on Goblin Guide flips. My opponent will have two lands, Goblin Guide, and only five cards left in hand. The Wall of Omens essentially said "Gain 4 life, make your opponent waste a turn, make your opponent use a card, and draw a card." That's pretty insane for

When it comes to toughness in Standard, 4 is a great place to be. Bloodbraid Elf, Sprouting Thrinax, Ranger of Eos, Bloodghast, Wild Nacatl, and level 2 through 6 Student of Warfare are all safely blocked by Wall of Omens. Searing Blaze? Not quite enough. Lightning Bolt? Not there yet. Urge to feed? Sorry. Four seems to be the magic number in today's Standard. Wall of Omens seems very well positioned for competitive play. Players will often have to attack into the Wall and then use a burn spell to finish it off. My example in the last paragraph illustrates how huge this tempo/card advantage swing can be. 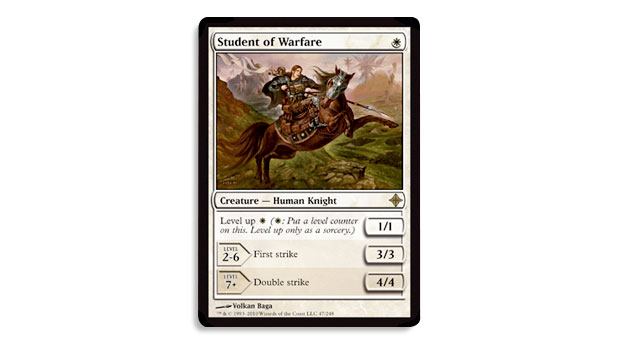 Defender is a subtheme in Rise of the Eldrazi. Overgrown Battlement already seems like a pretty good card, but things get completely awesome when I happen to be playing Wall of Omens in the same deck. My opponents will have a lot of trouble profitably attacking me when I'm playing an army of defenders. Once I have a few creatures with defender on the battlefield, Overgrown Battlement can easily ramp me into huge Eldrazi like Kozilek, Butcher of Truth. If you're in the business of casual play, this is the perfect time to build an all-defender deck that wins the game with Vent Sentinel. (And remember, all those older Walls have errata that gives them defender.) 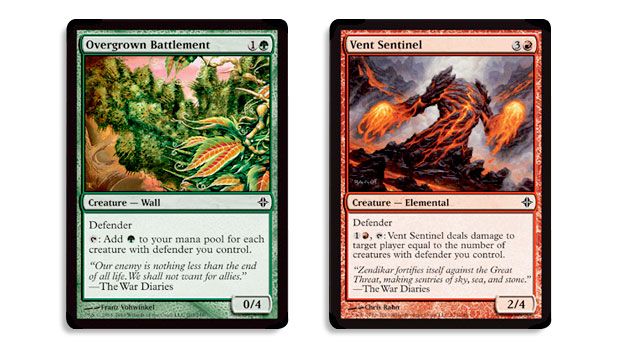 Wall of Omens lets you be tricky. I think this is a particularly strong quality. I like having quirky card interactions in my decks. It makes me play on my toes. I often make a lot of mistakes if I'm playing a straightforward, cast-and-bash type of strategy. For example, lets say I'm playing a white-blue Thopter Foundry / Sword of the Meek control deck in Extended. My opponent is playing Zoo. My opponent has a few creatures on the battlefield to my Wall of Omens and I'm about to cast a Wrath of God the next turn. I can profitably Repeal my Wall of Omens on my opponent's end step. I draw a card off the Repeal, I don't destroy my Wall with the Wrath of God, and I get to draw an extra card by replaying the Wall of Omens. This is a realistic occurrence that will probably happen once every three or four matches. Being a tricksy hobbit with your Wall of Omens isn't just for Extended, though. Æther Tradewinds is a fun trick that we can use in Standard and Block Constructed.

A lot of people may question Wall of Omens' power level: "It was awesome in Tempest. These days, cards are a lot more powerful." That's just it, though. If cards are more powerful these days, then drawing into extra cards is probably more powerful now than it was back then.

Also, back in Wall of Blossoms' heyday, there was probably only a 65% chance that your opponent was planning on winning by attacking. At least 35% of players were slinging combo decks or painfully slow control decks that won very deep games with singleton win conditions. These days, everyone is attacking. Wall of Omens always has value. 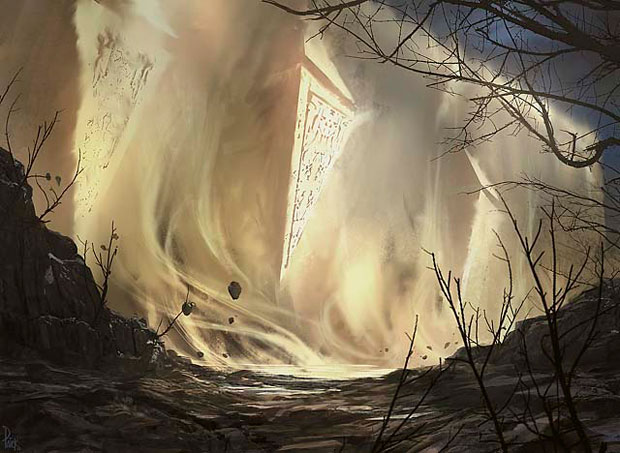 So, where does it go? Wall of Omens fits into every existing control deck in standard. It probably fits into some form of green-white big mana block deck. In fact, I think it probably has a place in almost every non-aggressive white deck in Standard and Extended. That's a pretty huge range of decks. At uncommon, I can see this card becoming a fixture of the Building on a Budget for the next year and a half.

I received a bunch of email last week asking for decks in my future preview columns. I went to the Visual Spoiler in the Rise of the Eldrazi product section and plucked out some of the more exciting cards to make a casual Standard deck with some of the cards that have been previewed from Rise of the Eldrazi.

Splinter Twin seems like a really fun card. The obvious combo with Pestermite seems awesome in an Extended Faeries deck. I wanted to make something a bit more casual, though. I went to Gatherer and typed in "untap" with the Standard filter on. 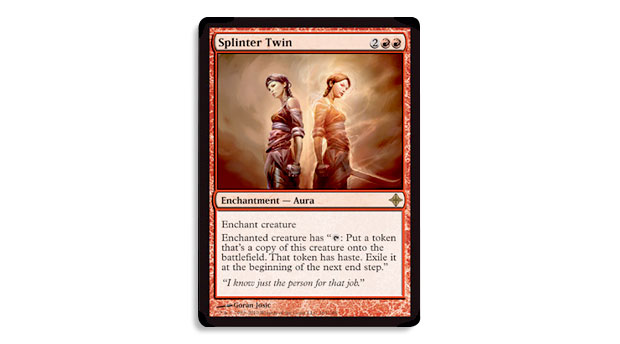 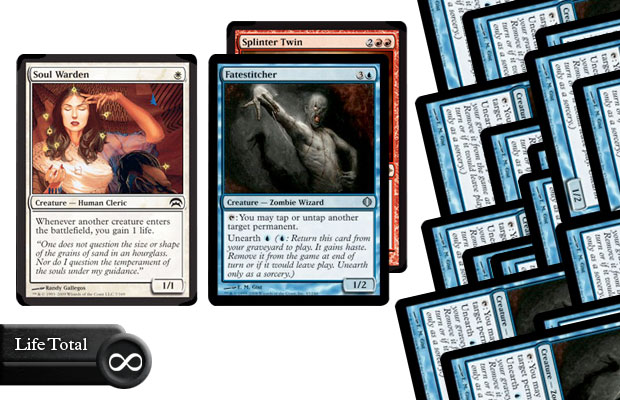 Let me explain my card choices.

Wall of Omens: Wall of Omens really shines in this type of strategy. It slows down my opponents. My opponents have a greater incentive to attack each other if I'm playing a multiplayer game with a few friends. It also helps me get through my deck to find the combo pieces I need to gain infinite life. If I have multiple copies of Splinter Twin in hand and it becomes clear that my opponent does not have a removal spell, then I can cast Splinter Twin on the Wall of Omens and tap it to draw an extra card every turn.

Fatestitcher: One third of my combo. I can fearlessly run my Fatestitcher out onto the battlefield the moment I have enough mana to cast it. The unearth on Fatestitcher is particularly nice. I can unearth Fatestitcher and cast Splinter Twin on it to surprise combo my opponent.

Splinter Twin: Another third of my combo. Splinter Twin works very well with Wall of Omens and produces infinite life when combined with Soul Warden and Fatestitcher.

Soul Warden: The third piece of the combo.

Divination / Treasure Hunt: Drawing as many cards as possible is very important with a deck like this. We want to maximize the chance of drawing every piece of the combo.

Lightning Bolt: Exceptionally strong early creature removal that can be used to dome your opponents after you have gained infinite life.

Journey to Nowhere: More early removal to help us survive.

Banefire: I worried that this deck may not have a reasonable means of winning the game after it gained infinite life. I decided that Banefire could be used as spot removal in the early stage of the game. Just make sure you have one copy remaining in your deck so you can cast an uncounterable twenty-something damage to the face.

Here's the deck I ended up putting together:

This deck won't be winning any tournaments in the near future, but the idea looks like a lot of fun. This could be a fun casual deck to put together for Standard with Rise of the Eldrazi. Wall of Blossoms is back and better than ever! Remember, it's an uncommon, so there's a good chance either you or your friends will open at least one at the Prerelease.