ast week I examined some of the overlooked cards from Zendikar. The two cards that really stuck out for me were Conqueror's Pledge and Luminarch Ascension. This week I'd like to build a deck that utilizes the power of Conqueror's Pledge. After a small amount of testing the card has proven itself to be very powerful. With the rotation of the Lorwyn Kithkin, I was able to trade for a play set of Honor of the Pure quite easily last weekend. I had already drafted enough Zendikar to have a play set of Conqueror's Pledge. I brought home the cards and went through the commons and uncommons I had at home with the intention of building a budget White Weenie deck. I'll start by going over the cards I considered. 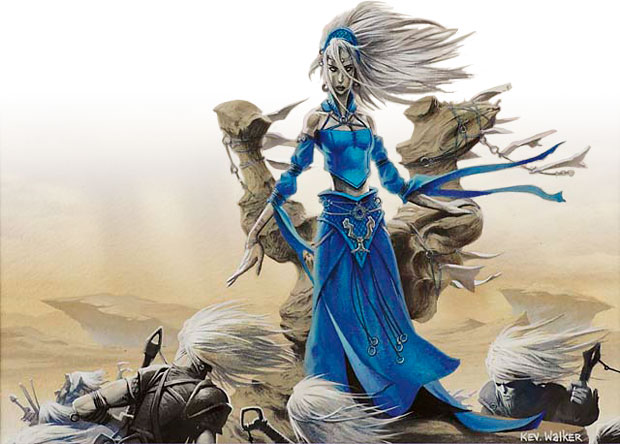 Veteran Armorsmith: A 2/3 for two mana is fine by any standard. Veteran Armorsmith's ability to pump my entire team's toughness is a great bonus. I figured this would probably be a four-of.

Veteran Swordsmith: This seemed like another obvious four-of to me. It turns even an un-kicked Conqueror's Pledge into 12 points of power.

Elite Vanguard: I've always been a big fan of Savannah Lions, and this guy really ups the ante by being a Soldier.

Path to Exile: Some of you may not own Path to Exile, or may not have four. If you're having trouble finding them, you can always replace them with another removal spell like Journey to nowhere. Path to Exile is an uncommon but in high demand, and I've gotten my playset by playing a good deal of Limited tournaments. This is the type of card you want to make sure you have four in your collection. I figured this was an obvious inclusion in any deck that was base white.

Ranger of Eos: I just can't help myself sometimes. Ranger of Eos is one of my favorite cards ever printed. I find myself picking up the Rangers every time I'm going to the drawing board with the intention of creating a new deck. The card is traded at a very low value, it has a power level that challenges tournament staples like Mulldrifter, and Invitational winner Antoine Ruel seems to have a St. Francis thing going on in the art. Most importantly, Ranger of Eos is one of the few cards that you play against Bloodbraid Elf and actually end up ahead. I always felt guilty including Ranger of Eos in budget decks with Figure of Destiny in Standard. I didn't want to lie and say you were getting full value from the card when the best target for it would break the budget. I was ready to include this card in the deck before I even realized it was a soldier. The creature type pushed this card way over the top in my mind.

Akrasan Squire: I want this deck to have enough targets for the Rangers. Akrasan Squire is an efficient beater on its own. The fact that it's a Soldier and can be tutored for with Ranger makes it a perfect fit.

Kazandu Blademaster: Even with no other Allies in your deck, Kazandu Blademaster is an excellent beater by itself. A 2/2 first striker with vigilance that gets a bonus from its creature type is quite good. If you draw these in multiples they become absurd.

Conqueror's Pledge: This is the reason I'm building the deck in the first place. This card is an improvement on Cloudgoat Ranger. Putting 6 points of power on the table for 5 mana that can't be dealt with via spot removal is already incredible. Throw in a Veteran Swordsmith or Honor of the Pure and this card becomes truly absurd. Imagine having two Honor of the Pure in play and casting this card. That's 18 points of power!

Honor of the Pure: Crusade was always a staple in White Weenie decks of the past. This card is markedly stronger because it doesn't haphazardly help your opponent by pumping their creatures. It combos very well with Conqueror's Pledge and happens to be quite good with all our other creatures too.

Once I put the deck together, it looked like this:

It's a pretty straightforward deck list. Nine four-ofs and twenty-four basic lands. I brought the deck to a local shop and played some games against the people there. 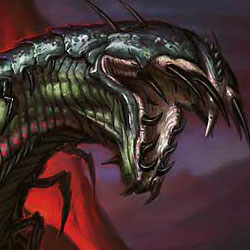 I lose the die roll and keep Elite Vanguard, Honor of the Pure, Veteran Swordsmith, and four Plains. My opponent plays Savage Lands and passes the turn. I draw a Conqueror's Pledge, cast my Elite Vanguard, and pass the turn. My opponent casts a Plated Geopede and passes. I draw Ranger of Eos, cast Honor of the Pure, and attack for 3 with Elite Vanguard. My opponent plays another Savage Lands, attacks for 3, and casts Putrid Leech. I draw Path to Exile, cast my Veteran Swordsmith, and pass. On his turn he plays a fetch land and pops it to give the Geopede +4/+4, then casts a Bloodbraid Elf and flips into another Plated Geopede. He attacks with everything. I block the Putrid Leech with my Elite Vanguard, take 8, and go to 9.

On my turn I draw another land, cast Ranger of Eos, and search for an Elite Vanguard and an Akrasan Squire. (Don't want to walk into Maelstrom Pulse.) My opponent casts Maelstrom Pulse, destroying my Veteran Swordsmith, and attacks with his Bloodbraid Elf. I trade with my Ranger of Eos. I draw an Honor of the Pure, cast it, and cast both my one-drops. My opponent plays another fetch land, pops it, and attacks with two Plated Geopedes for 5 damage each. I chump-block both. He casts Ob Nixilis, the Fallen, but I cast Path to Exile on the legendary creature during his end step. On my turn I draw another Veteran Swordsmith, cast my Conqueror's Pledge and pass the turn. He casts a Bituminous Blast and flips into a Volcanic Fallout, but I have two Honor of the Pure on the battlefield, and he puts the instant on the bottom to avoid taking two. On my turn, I draw another Path to Exile, cast Veteran Swordsmith, and attack for lethal damage. 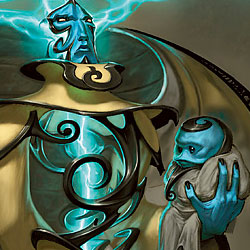 I win the die roll and keep Akrasan Squire, two Kazandu Blademaster, Veteran Armorsmith, Ranger of Eos, and two Plains. I cast my Akrasan Squire and pass. He plays a Glacial Fortress and passes. I draw a Plains, attack for 2, and cast a Kazandu Blademaster. My opponent casts an Esper Stormblade and passes. I draw Path to Exile, cast another Kazandu Blademaster, and attack for 4 with the first one. He plays a third land and passes the turn. I know he has Ethersworn Shieldmage in his deck, so after I draw a Plains, I just cast my Ranger of Eos, search for two Elite Vanguards, and pass the turn. He casts the Ethersworn Shieldmage on my endstep, then casts a Master of Etherium and attacks for 4 in the air with his Stormblade. He casts a Borderpost before passing. I draw Honor of the Pure and cast it, I attack with everybody. He blocks my Akrasan Squire with his Master of Etherium and my Ranger of Eos with his Shieldmage. I Path to Exile the Master of Etherium and his Shieldmage hits the bin. I cast an Elite Vanguard and pass. He casts another Master of Etherium and passes. I draw a Veteran Swordsmith and attack for lethal. 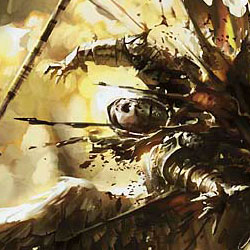 I win the die roll and keep Veteran Armorsmith, Kazandu Blademaster, Conqueror's Pledge, and four Plains. My opponent plays a Dragonskull Summit and passes. I draw a Path to Exile, play my land, and pass the turn. My opponent casts a Lotus Cobra. I go into the tank for a minute and decide the extra land I'll give him will be similar to the Cobra's ability, so it's not worth killing the Snake. I draw an Honor of the Pure, cast my Kazandu Blademaster, and pass the turn. My opponent plays a fetch land, pops it, and casts Bituminous Blast, cascades into Bloodbraid Elf, and recascades into Putrid Leech. He attacks for 5. I draw a Ranger of Eos and cast Veteran Armorsmith. He plays another land and casts a Bloodbraid Elf, which flips into a Maelstrom Pulse. He attacks me for 8. I draw another Conqueror's Pledge and cast my Ranger of Eos, getting an Elite Vanguard and an Akrasan Squire. He bolts my Ranger on my end step, and he has lethal damage on the board. 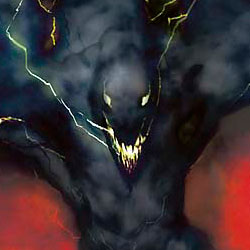 I really like this kind of deck in general for the new Standard. It seems like White Weenie is very consistent, while the other decks in the format will probably struggle a bit with their mana. I fear the cascade decks have a lot going for them in the way of degenerate draws, and I want to prevent any deck from running us over in a way that we didn't foresee.

I remember including Soul Warden in a Sanguine Bond deck that abused Ranger of Eos. Soul Warden seems like it may be a better fit than Akrasan Squire here. So I'd like to make that change and see how things work out. The Soul Wardens are not Soldiers, but their ability to stall in the aggro mirror matches will work in our favor when we need to be swinging the game in our favor with cards like Conqueror's Pledge.

I also want to start formulating a sideboard. I feel pretty confident that Cascade decks will be a huge portion of the upcoming Standard format. I feel strange putting Ethersworn Canonist in the maindeck, but it may be the correct thing to do. For now I'll keep it in the sideboard, but I want to keep myself open to new ideas and I think Canonist may be a good call for decks that are trying to neuter the Cascade decks. Here's the list I'll probably be playing at FNM next week:

The list hasn't changed much on paper, but the Soul Wardens make the games last a bit longer. Generally speaking, life gain has never been a strong ability because it simply delays the inevitable. Fortunately, however, the inevitable in this deck is having 12 or 18 points of power from a single card.

I think this deck is a strong and inexpensive choice for those looking to compete in the new Standard. I recieved a lot of email asking for a White Weenie deck with Zendikar, and I hope this column addressed a lot of the issues you guys had. Again, please shoot me some email with your new deck ideas. I'm always looking for something new and exciting to write about.