ll of you probably know that the Worldwake Prerelease is this weekend. A few friends and I are heading down to Philadelphia in hopes of cracking open a fresh Jace, the Mind Sculptor. I strongly suggest all of you make plans to visit your local Prerelease and sling some exciting new cardboard. The Prerelease is a great way to make new Magic friends and one of the most fun ways to cultivate existing friendships.

I have thought a lot about Magic recently. Specifically, I have been thinking about what captivated me so much when I first started playing. One aspect of the game has really kept me entranced throughout my life: deck building. Creative deck building is rewarding. It also kept me thinking about the game long after I had stopped playing. I sat in class scribbling down new deck lists on literally thousands of occasions.

One of the most common methods of deck improvement and creation is the redux.

What Is the Redux?

A lot of time you can emulate an successful deck of yore in terms of mana curve and goals. You can also build upon existing decks and add new cards that may have been overlooked in the past. The Elf deck that Chris and I played last weekend would be an excellent example of this. The deck borrowed a lot of ideas from LSV's Pro Tour–Berlin deck, but we added Cloudstone Curio and made the deck more combo-focused than ever before.

From time to time you need to make a redux of something that initially failed.

Sometimes a potentially good deck comes up short because the existing format's card pool just does not have enough to fill up a 60-card deck. This sort of thing was especially noticeable in Lorwyn block, where underappreciated tribes, like Faeries, were expanded upon with the release of Morningtide and cards like Bitterblossom.

I wrote about an Ally deck a few months ago. Unfortunately, I found that Zendikar did not have enough Ally cards to build a competitive Ally deck. Worldwake, on the other hand, gives us enough Allies to augment the current available cardpool and build a truly awesome Ally deck. Let's start by going over the Allies in the Visual Spoiler on the Worldwake product page. 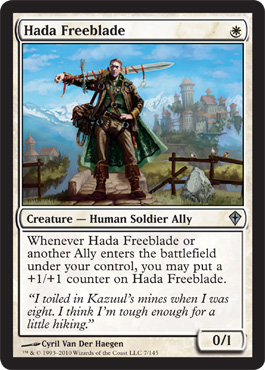 Hada Freeblade: This is very exciting for Ally-lovers anywhere. This card has the potential to be very unfair. Hada Freeblade is the type of card I really want to play with when I'm slinging an agressive Ally deck. The Freeblade is very powerful in a dedicated Ally deck. Players these days don't have enough removal to be wasting it on your one-mana creatures. Hada Freeblade is one of those cards that really demands a removal spell if your opponent doesn't plan on getting run over. 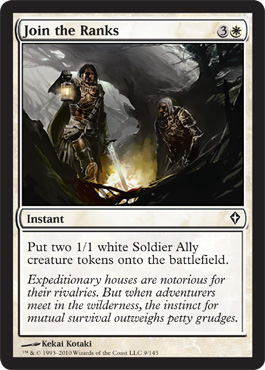 Join the Ranks: Another solid card to help out the alliance. Join the Ranks can be a double pump for all of your creatures if you time it correctly. This card really seems like it could make our Ally deck into a regular winning machine. I was initially under the impression that this card was a sorcery, but I knew how I wanted to work with the new Allies the moment I learned of its quickness. 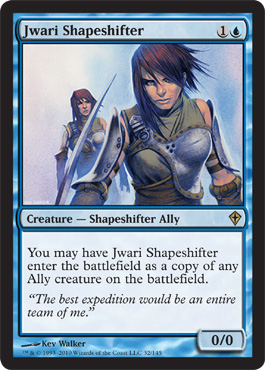 Jwari Shapeshifter: Here's another card that could be really good if Allies shape up to be a powerful archetype. I feel like this card may belong on the sidelines until we find the right place for it, though.

I have not had the chance to play an aggro-control deck in a very long time. I feel like the new Allies from Worldwake give me a perfect opportunity to try out the new cards in an archetype that I feel very comfortable building.

The first thing you need to do when creating a new deck is decide what you want the deck to do. Your deck probably won't do very well if you want it to do ten different things. If your goal is to win through agression, then you should be as aggressive as possible. If you want to grind out card advantage and win a long game, then you should probably have Cruel Ultimatum at the top of your curve.

Aggro-control decks want to play reasonable threats that must be dealt with and good tricks that make sure your opponent's key cards cannot be used profitably. I won my first tournament with an aggro control deck. I played the following list:

This deck's curve worked out very well for me, I would like to do my best to preserve the curve of that deck and merely update the list as an ally deck with some of the new cards available in Worldwake.

Lets start by breaking down the converted mana cost of the spells in the original deck:

We don't need to be exact with the numbers, but this gives us a general idea of where we want the curve to be with a deck like this. Hada Freeblade can easily take the spot of one of the two-drops. You didn't want to be playing with one-drops besides Savannah Lions or one-mana Rebels back in the day. Nowadays, cheap creatures are a lot more powerful. I decided it was safe to swap one-drops for two-drops. I'll give you a breakdown of the converted mana costs:

At one or two mana:

I wanted this deck to play like my old Apocalypse-era Standard deck. Into the Roil reminds me a lot of Repulse. It may seem strange, but I liken Ranger of Eos to Fact or Fiction in a lot of ways too. Hindering Light may seem like an odd choice, but the card is very powerful in a deck like this. When countering spells with a deck like this, you probably only need to counter your opponent's removal, unless they have Baneslayer Angel. Hindering Light gives us an easy two-for-one deal that will be very frustrating to an opponent that wants to take out a key ally. I also imagine hilarity ensuing when you counter a Cruel Ultimatum with it.

Here's how the final list looks once I put it together.

4 Jwari Shapeshifter 3 Cancel 2 Into the Roil

This is the type of deck that really teaches you how to play Magic well. The deck rewards careful play and requires that you make crucial decisions about when to play threats or hold back for answers.

Many people will tell you that I have gotten really into combo decks over the past few years. Worldwake offers up a powerful new combo tool that also works brilliantly as a simple card draw spell. Treasure Hunt is probably my favorite card spoiled thus far, and I'm excited to see how this card affects the Standard metagame. What really gets me excited about the new card, though, is Extended. It seems like it would not be very hard to build an exciting new combo deck with the new card. 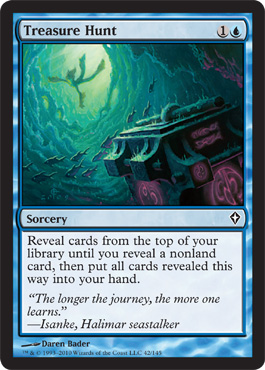 Seismic Assault is obviously very strong with Treasure Hunt. The major problem with a deck like this would be its ability to consistently draw a Treasure Hunt. This problem can be solved quite easily by using the cascade spells from Alara Reborn. A deck that plays 48 land would probably do in this case.

I ran to be the student council treasurer back during my freshman year of high school. In my speech, I explained that I had always dreamed of being a pirate, sailing the seas in search of hidden treasures. The word treasurer, I pointed out, is spelled T–R–E–A–S–U–R–E–R, and if you remove the final R it spells treasure. So, in fact, there is buried treasure inside the word treasurer. As you can see, I have always been the type of guy who enjoys treasure hunting. I never imagined that I would go out looking for gold or silver. No, I am more of a gemstone kind of guy. After all, I love consistent mana bases. The eight Gemstone lands are actually perfect for this deck. 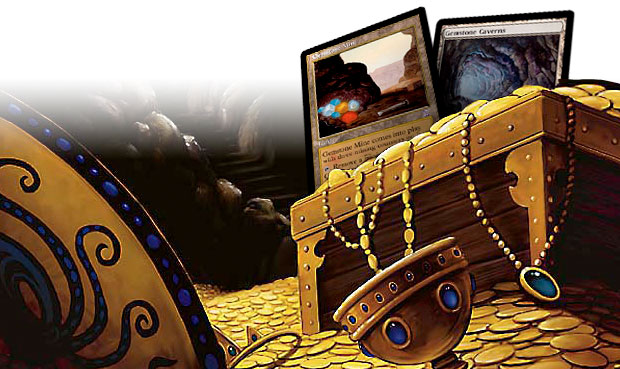 This deck may seem like a joke, but every Treasure Hunt you cast tutors for another Treasure Hunt, a Violent Outburst, or a Seismic Assault. The combo is very consistent. The beauty of the deck is that the one combo piece actually tutors for the other while it fills your hand with free Shocks. As soon as you cast the Seismic Assault you can use the excess lands in your hand to protect yourself if you don't have enough to kill your opponent right away. Any Treasure Hunt or Violent Outburst should provide you with enough land to finish the deal, though. This list could be truly devastating with a more elaborate mana base. The deck can win games as early as the third turn. If you like combo decks, you should strongly consider trying out Seismic Assault with Treasure Hunt.

These are just a few of the new and exciting decks you can build once Worldwake is released. Prerelease time is the most exciting time in Magic for aspiring deck builders everywhere. Load up your Visual Spoilers and start brewing up some new ideas. The Prerelease is less than a week away now. It's good to know what cards you want to trade for before you actually get to the venue. A lot of time you may have a "Eureka!" moment in a game of Limited.

At the Betrayers of Kamigawa Prerelease, I opened an Umezawa's Jitte. I put the card in my deck and assumed it would be pretty good. A few of my friends scoffed at the card and asked if I should play with it. As it turned out, I won every game that I drew my Umezawa's Jitte. I was so impressed with the card that I started brewing up new decks in my head during the Prerelease that included the powerful new Equipment. 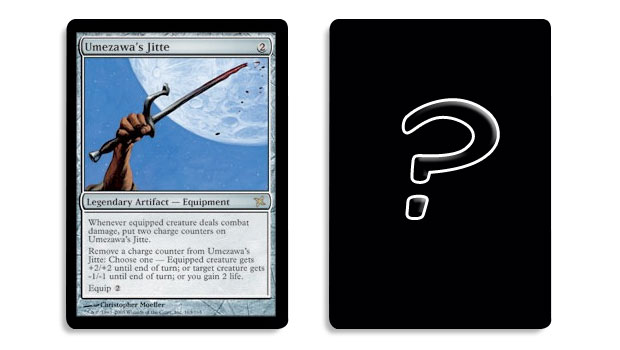 Finding the next Umezawa's Jitte may not be realistic, but there is always the possibility of discovering a truly powerful card that looks inconspicuous. Prereleases are always great experiences. Call up some friends and make some time this weekend!

I look forward to hearing all of your comments from the Prerelease. Make sure to send me some emails with your new Worldwake deck ideas. I'm sure all of you will have some great new ideas.