How Could You Be So Heartless?

ello and welcome to the long-awaited Heartless Summoning article. Heartless Summoning is a very powerful spell from Innistrad that begs deck builders to design decks around it. Like most people, my initial inclination when building with Heartless Summoning was to fill the decklist with creatures. I wanted to maximize the value of Heartless Summoning to make it worthwhile to play. Most of these decks had a lot of trouble with token strategies, and that just isn't a profitable way to approach the current Standard format. 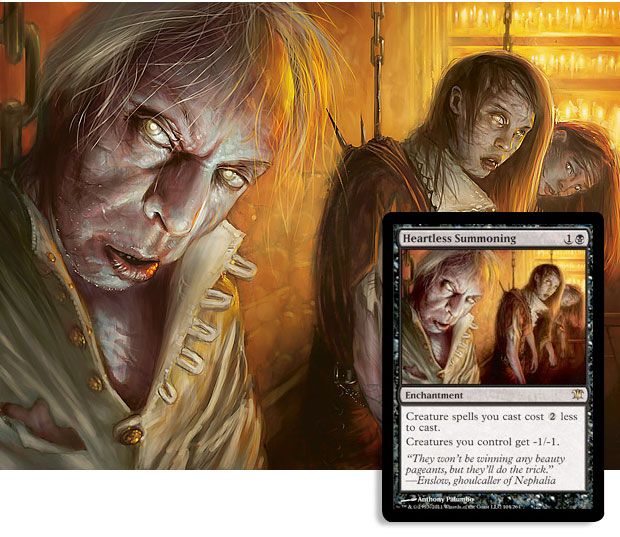 I realized that I may have missed something when I was doing commentary at a tournament in Las Vegas recently. A number of players went very deep in the tournament piloting a unique Blue-Black Control deck that used Heartless Summoning to ensure a backbreaking endgame. One of these players, Alex Mukhar, even managed to make the Top 16 of the tournament, which had over four-hundred competitors.

I was fortunate enough to get some face time with the creators of the deck, and I was able to pick their brains for information about the archetype. I know they'd like me to tell you that the deck is called Dr. Manhattan, named for Frost Titan. The deck plays like a Blue-Black Control deck and, as a result, players will often make big mistakes against you because they're under the impression that you're a control deck that can only win with Consecrated Sphinx.

"What do you mean, gigantic Squadron Hawk?"

Rune-Scarred Demon can search for another copy of Rune-Scarred Demon. For example, if your opponent taps out and you have access to six mana and a Heartless Summoning in play, then you can cast the demon, search for a Phyrexian Metamorph, cast the metamorph and copy the demon, and search for another Demon. It becomes very difficult for your opponent when you have an endless stream of Dragon-sized monsters crashing toward them at all times.

The original deck designers found a flaw in the Rune-Scarred Demon plan. They found themselves often losing races to Mirran Crusader, a major player in the format. They decided to play a bunch of Sphinx of Uthuun so they could block the potentially unblockable Mirran Crusader. Sphinx of Uthuun is certainly awesome, and there's nothing I love more than watching an opponent split a Fact or Fiction pile. However, the inevitability of Rune-Scarred Demon makes it a clear favorite for me in the fatty-boom-boom department. I decided to take a different route when trying to defeat all the Mirran Crusaders running around. Perilous Myr accomplishes the goal beautifully and seamlessly. A lot of the time you cast a chain of Demons and finish the chain with a Perilous Myr, which can be cast for free as a 0/0 to destroy a Mirran Crusader. Also, having the Perilous Myr in your deck helps minimize the effectiveness of early-game Mirran Crusaders. 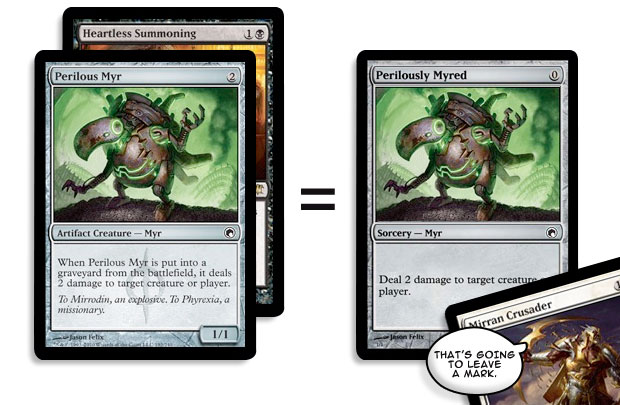 The original deck played three copies of Think Twice. I wasn't a fan of Think Twice when I first looked at the list, but I really liked drawing the first copy in actual game play. I was always disappointed when I drew more than one copy, though. I would often win or lose games with the second copy of Think Twice still sitting in my hand or graveyard. I decided to mitigate this problem by playing only one of the blue instant and replacing the other two with Divination. This seemed to work out a lot better in the matches I played.

Solemn Simulacrum was a bit of a hurdle for me. The card is somewhat difficult to acquire, but I needed to find a good replacement. I tried incorporating Sphere of the Suns and Skinrenders over the Solemn Simulacrums and some spot removal, but it was a much inferior strategy. Eventually, I decided that it wasn't a huge issue if the deck had one card that was difficult to acquire. The rest of the nonland cards in the deck should be very easy to find or trade for.

Ponder didn't make an appearance in the original deck, but I needed to try it for myself. After playing with Ponder, I cannot imagine the deck without it. It greatly increases the deck's chances of making key plays like turn-two or -four Heartless Summoning, or turn-four Solemn Simulacrum. It's also important that the deck is able to find the right mix of removal to interact with its opponents.

Mana Leak is awesome in this deck. There are a lot of games where you would rather keep up Mana Leak or spot removal instead of casting Heartless Summoning on turn two. The deck truly functions like Blue-Black Control until it reaches the mid- to endgame, at which point it just starts to churn out terrifying monsters.

The numbers on your removal spells are up to you. I like splitting up my spot removal because it gives me play against everything and it creates the illusion that my deck is filled with tons of spot removal. This makes strong players more likely to play around spot removal even though the deck doesn't have that much of it. Two copies of Black Sun's Zenith are incredible against blade decks, Tempered Steel, and especially tokens.

Massacre Wurm is the only one-of I chose to keep. I never found myself searching for any of the other one-ofs, Massacre Wurm often outright kills token opponents.

I chose to go ahead and include four Darkslick Shores and Drowned Catacombs here. If you're unable to acquire them, then you can replace them with basic lands. We can do some quick math and figure out the correct numbers. First, we're going to take Ghost Quarter out of the deck because the deck won't be able to function well with colorless lands and all basics. Then, we'll count up the amount of black the deck needs. I count twenty-three black mana symbols. Then, we'll count the blue. I count fourteen. Ponder helps us find black mana, as do Think Twice and Divination. I don't want to drop below twelve blue mana sources, but any more would make Massacre Wurm laughable. That being said, if I were building with just basics I would play twelve Islands and fourteen Swamps. I'd add blue-black dual lands as I acquired them, cutting Islands for the first four, then one Swamp for the fifth, then more Islands for the sixth through eighth rare lands.

Here's the decklist I settled on:

2 Ghost Quarter 1 Go for the Throat

My sideboard has been changing so much that it isn't even worth posting card numbers. The only cards I've become attached to are Flashfreeze, Gut Shot, and an extra Massacre Wurm or two.

The deck is a blast to play, and it solves the major issue that previous Heartless decks have struggled with. The deck is strong and manages to play well even when it doesn't draw Heartless Summoning.

I played a bunch of games with my friends when refining the deck, and I'd like to share a few of the games I was able to play with this finalized list. 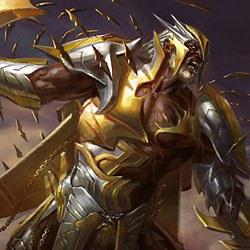 I won the roll and kept Go for the Throat, Divination, Mana Leak, Heartless Summoning, Island, Darkslick Shores, and Swamp. I played my Darkslick Shores and passed the turn. My opponent cast Avacyn's Pilgrim and passed the turn. I untapped and drew Solemn Simulacrum. I decided that playing a Swamp and killing my opponent's one-drop with Go for the Throat was more important than casting Heartless Summoning. The token decks usually only play seven or eight mana creatures and the decks are completely devoid of two-drops. By destroying this mana creature I let myself Mana Leak my opponent's three- or four-drop on turn three, safely carrying me to the midgame. 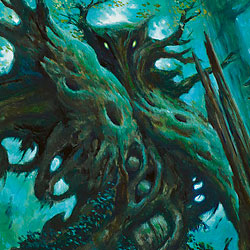 I'd especially like to hear what format you'd like me to build for. Modern PTQs are right around the corner and I'm excited to see what crazy concoctions are possible in the newest competitive format. Make sure to comment in the forums whether you're in favor or against a Modern deck for next week. I'd be especially happy if you'd be interested in a Heartless Summoning deck for Modern.