I Ooze, You Lose

very week, I sit down to build a new deck, and one of the first cards I think about is Necrotic Ooze. I've made a few Standard decks that include the card, but they all include hard-to-acquire rares like Griselbrand and Liliana of the Veil. This past week, I've been fooling around with a Necrotic Ooze deck for Modern. The deck can be acquired fairly easily and it has been performing very well in heads-up queues and the tournament practice room. I'd like to share my current list and give an in-depth explanation of the card choices. 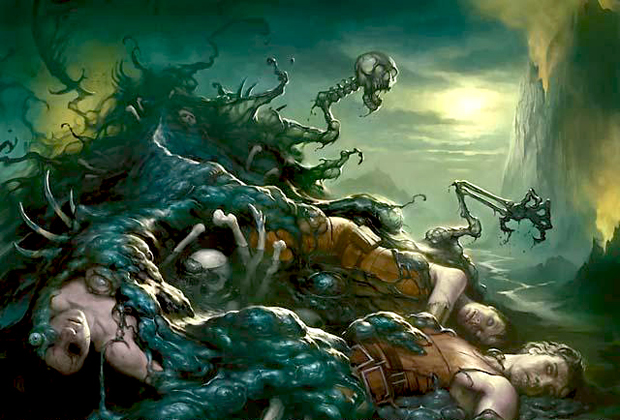 The first thing we need to do when building around Necrotic Ooze is decide what combo we intend on assembling. There are a lot of options when we look at the available card pool for Modern. However, one option seems significantly better than the others: Devoted Druid opens two lanes of combo power for Necrotic Ooze. Quillspike is the obvious interaction, making Necrotic Ooze have unlimited power and toughness so it can charge into the red zone for lethal damage every turn. This is the bread-and-butter combo of the deck, but spot removal or bounce spells can often make this look silly. Grim Poppet changes that, though. With Devoted Druid and Grim Poppet in the graveyard, Necrotic Ooze is able to wipe an opponent's board clean the moment it enters the battlefield. If your opponent has a removal spell to respond with, you can simply respond by killing his or her whole team. It's surprisingly potent. 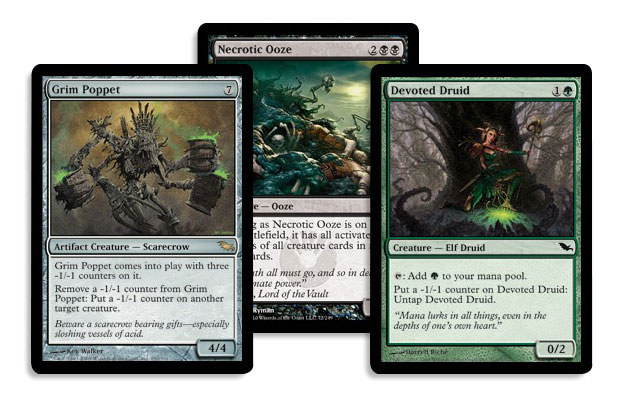 One of the nice things about going the Devoted Druid route is that our deck will be capable of comboing without ever seeing Necrotic Ooze. Some games are won simply by attacking with Quillspike and pumping it to the maximum. This might seem strange, but non-interactive combo decks will be forced into a competitive race if you have Devoted Druid and Quillspike or the tools necessary to assemble them.

Fauna Shaman is the best card in our deck. When given the option of casting Fauna Shaman or any other card on the second turn, Fauna Shaman is always correct. Don't be afraid to discard combo pieces, as they work just as well from your graveyard once you've found a Necrotic Ooze

Birthing Pod is still very easy to acquire and I want to take advantage of that while I can. This is an awesome card I've been unable to build with in the past because of its high demand. I feel like I have been making up for lost time as I've built a few different Birthing Pod decks in the past few weeks. Birthing Pod does a lot for a deck like this. It can turn our Devoted Druid into a Quillspike and our Quillspike into a Necrotic Ooze. It can turn any one-mana accelerator into a Fauna Shaman. I had a Birthing Pod chain for a while, but I was unimpressed with the six-drops available and I've been very happy with Birthing Pod's interaction with the bottom part of the deck's mana curve.

We're going to want to play a lot of mana accelerators. Mana accelerators let us combo faster, they can be upgraded into Fauna Shamans and combo pieces once we have a Birthing Pod, they soak up removal spells, and they give us mild early aggression. Birds of Paradise, Llanowar Elves, and Elves of Deep Shadow make the cut.

Thornling is obviously very strong with Necrotic Ooze, but a lot of games can be won by Thornling alone. With Devoted Druid and eleven one-mana accelerators it's not unusual to play this guy on turn three, often with haste. Sometimes a 7-power trampling indestructible creature is good enough on its own. If you have a Fauna Shaman online and a Thornling in hand you should probably pitch the Thornling for a Necrotic Ooze. It gives you a ton of options as the game progresses and ensures your opponent is going to be forced to counter the Ooze or lose immediately.

I want to play some Treetop Villages because we're going to win a lot of games by simply attacking. Treetops work well with mana creatures, especially those with 0 power like Birds of Paradise and Devoted Druid.

The heads-up Modern queues are super diverse. There isn't much certainty as to what we're going to play against. This is the sideboard I've been using.

Thousand-Year Elixir is good against decks that don't apply any real pressure. They will have removal spells for our guys, but they'll be in trouble with Fauna Shaman getting activated, often twice, the turn it comes into play. 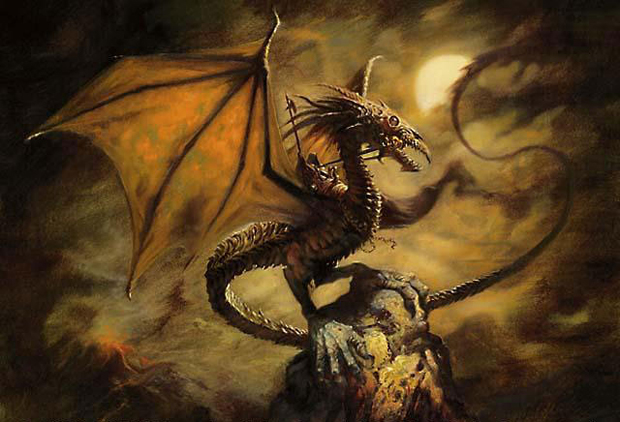 Hypnotic Specter comes in a surprising amount of the time. It's a card that forces many decks to use a removal spell and can make things awkward against combo opponents.

Duress is primarily for beating combo decks. We have the ability to race combo decks, and we're very capable of winning on the fourth turn, but it's nice to have disruption where they might be lacking.

Ravenous Baloth is a nice source of lifegain that comes with a huge roadblock against the most aggressive opponents.

Krosan Grip is pretty obvious. They have highly problematic artifacts or enchantments? We have Krosan Grip.

Viridian Shaman is very good against decks with Sword of Feast and Famine; we can search this up quite easily and get some free cards to recoup our losses. Afterward, we can pod our Viridian Shaman into a Necrotic Ooze and take advantage of what we discard to the Sword trigger. It's pretty awesome.

Having one Melira, Sylvok Outcast makes it much harder for the Melira Pod decks to combo against us. We can search this up and leave it sitting in play. They need to kill it or legend rule it away before they can make anything impressive happen. Remember, they can gain infinite life, but they often don't have the Murderous Redcap they need to finish the job. Our deck is capable of infinite damage, so we can kill their combo and deal them lethal damage.

Faerie Macabre is a nice thing to have against decks that want to reanimate Elesh Norn, Grand Cenobite. An active Fauna Shaman becomes a very effective anti-graveyard card when you have three copies of Faerie Macabre in your deck.

A lot of readers have asked that I bring back game reports. I've played a lot of matches with this deck and I can share a couple of them here. 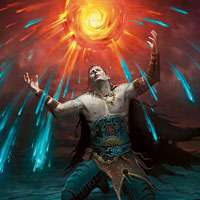 I decided it was safest to pass the turn. My opponent cast Deceiver Exarch on my endstep and attempted to tap my Necrotic Ooze. I used my last mana to give Necrotic Ooze haste and tapped it for one green mana; untapped it by putting a -1/-1 counter on it; tapped it to use Fauna Shaman's activated ability, discarded Grim Poppet, and searched up Quillspike; and proceeded to make my hand all Necrotic Ooze, kill the Deceiver Exarch, and have access to infinite mana. My opponent passed the turn after playing a land. I played a bunch of Necrotic Oozes and made them all huge before attacking; my opponent attempted to Cryptic Command to tap my team, but I untapped my team and attacked. 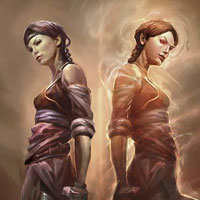 My opponent cast a Deceiver Exarch on my endstep. When my opponent untapped and cast Splinter Twin, we were off to Game 3. 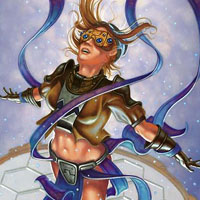 I drew a Forest, played it, cast Quillspike, and activated Birthing Pod to sacrifice Llanowar Elves and search up Devoted Druid. My opponent played a third land, tanked for about thirty seconds, and conceded. 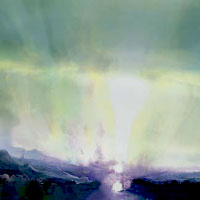 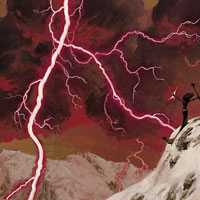 I'm not sure if you've ever had a Thornling in play against Jund, but it's pretty much the most unfair thing in the world. I ended up finding a second Thornling after having some lands and buying time with Ravenous Baloth. My opponent couldn't deal with Thornling's size and indestructibility.

I would strongly recommend this deck to someone looking to get started with competitive Magic Online. The deck is fast enough to beat the combo decks and it has an unbelievable amount of inevitability against everyone else.

Be sure to shoot me emails or hit the forums with questions, comments, or ideas for future columns.