Since I've taken over Building on a Budget, I've had just a couple of simple rules that I follow for each and every week:

Regarding #2: Here's the sticking point for many readers. Everyone who comes and reads this column has their own answer to the following question: "What makes a budget deck budget?" I've been writing this column for going on three calendar years now (2006, 2007, and 2008), and I've heard all sorts of answers:

I could keep going on and on here, but you get the general idea. The thing is, I've never really solicited the opinions of the readers regarding the budget limit in this column—mostly, I've gotten sporadic feedback through the forums and through e-mail. I'm not going to give my opinion here (I don't want to influence any else's comments or votes), but I want to hear what you have to say about the Building on a Budget ticket limit for each week's article. I'm going to do this in two ways: with a couple of polls, and by reading feedback in the forums of this article about why you think the ticket limit should be at a certain number (or just generally higher, lower or unchanged).

Please note, and I'm saying this up front—the results of these two polls will not immediately change the way that the budget on Building on a Budget operates. However, they will influence a decision about whether a change happens, so your votes (and comments especially) will matter greatly!

Remember, your feedback is extremely valuable regarding the issue of budget! Be sure to chime into the forums this week with your opinion!

Meanwhile, I was at the Roanoke Pro Tour Qualifier at the Star City Game Center when I was shown the following Extended list. The deck looked like a ton of fun, and I was happy to see it make a Top 8 of a PTQ. Here's the list:

Combine either of these with Essence Warden for a shot of infinite life, by the way.

Well, the core of this deck is definitely budget—it's Intruder Alarm (a 2 ticket rare), Imperious Perfect (found all over the place at two for a ticket), Sprout Swarm (a bulk common), and Llanowar Elves (easily found at four for a ticket). Here's a cost breakdown of the original version of the deck, as played by Indy Watson:

128.3 tickets is well beyond the budgetary limit of 30 tickets set by this column. Thankfully, the cards that contribute to this deck going over budget are all nonessentials—mana producers (for which there are budgetary substitutions), Birds of Paradise (and there are other one-drop common mana producers) and Umezawa's Jitte (which is unique, but not necessary for the combo).

Let's see what happens when we take out all of the higher-dollar cards from the deck. 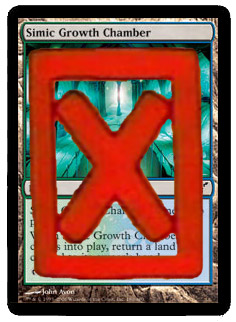 I went through all of the Extended-legal cards available in blue, green, artifact, or land varieties, and wrote down budget cards which might be good additions for the deck. As it stands, the deck has one major problem—the need to have access to an untapped green mana turn one (for Llanowar Elves or elf-alike of some type), and an untapped blue mana on turn two (for Remand or for Intruder Alarm). This means that some common budgetary lands were not ideal for this deck (Terramorphic Expanse, Simic Growth Chamber) since I needed access to every mana possible during the opening turns, and needed access to both colors of mana.

I considered putting in either Epic Struggle or Blasting Station, because both allowed me the option to win without attacking, but I decided that, if I had twenty 2/2 Elf Warriors in play, I wouldn't really need to have to have another card in play to win that game. Blasting Station is still a serious consideration to add to the deck, just because it gives the deck a way to deal with some problem creatures running around Extended (Ichorid, Dark Confidant).

I decided to go with Forbidden Orchard as my first replacement land, because A) I found them relatively cheaply (1.5 tickets each) and B) they put a 1/1 creature into play under my opponent's control, which triggers Intruder Alarm. This means that I can potentially go off a turn earlier with Sprout Swarm, provided I have a mana-producing Elf in play (tap the Elf for mana, untap it after the Intruder Alarm trigger from the Orchard, then use it to convoke for another mana—double dip!). For the other lands, I put in basic Islands and Forests. And while I couldn't replace Umezawa's Jitte with an offensively minded card, I did decide to focus more on mana acceleration, by putting both Boreal Druid and Utopia Sprawl into the deck—the Sprawl to give me access to blue mana on turn two, and the Druid for sheer acceleration (and to have another Elf for the Wren's Run Vanquishers).

Here's how the deck ended up:

For those who have been reading for a while, you know that I hate facing PTQ-level decks in the casual play room. However, this deck had a pretty shaky mana base compared to running nearly a hundred tickets worth of fancy-pants lands, and I wasn't sure how to play all of the nuances of the deck, or if I wanted to build a sideboard to take it to the tournament practice room. So, I put the following disclaimer on every match I played (and I created all of the matches):

This way, whoever decided to play against me knew exactly what they were getting into, and I wasn't just trolling the room looking to smash people over the head with my PTQ-winning deck du jour (as a note, this deck lost in the quarterfinals in its original form).

I get a first-turn Utopia Sprawl on a Forest, naming blue, and land a second-turn Coiling Oracle (getting Sprout Swarm), but see Llanowar Elves hit by Suttering Sprite. My third-turn Imperious Perfect is hit by Whirlpool Whelm, and my Wren's Run Vanquisher is hit by another Stuttering Sprite. I land back-to-back Intruder Alarms and a Boreal Druid, with double Forbidden Orchard out. He taps out for Scion of Oona at end of turn, and I tap Boreal Druid for colorless, untap it, tap it for colorless, untap it, tap my Forbidden Orchard for green, tap my Druid twice more, play Sprout Swarm with Buyback, tap my Druid twice, tap my other Orchard for green, tap my Druid twice, cast Sprout Swarm with Buyback, and go infinite. CahPahkah concedes.

I get first-turn Utopia Sprawl, followed by Boreal Druid, Wren's Run Vanquisher, Intruder Alarm, and Imperious Perfect. He plays Utopia Vow on my Druid and Perfect, and Pacifism on my Vanquisher, with a Mesa Enchantress in play. He then drops a Yavimaya Enchantress and puts Battle Mastery on his Enchantress, turning it into a huge double striker. For my end, I use the Utopia Vow to produce green, and make thirty 2/2 Elf tokens at the end of his turn. I win on my attack.

He gets 2 Flamekin Bladewhirl, but I get 2 Wren's Run Vanquisher. I knock him down to 2 life before he finally stabilizes with extra creatures to kill mine. I then drop Intruder Alarm, Llanowar Elves, and Essence Warden, and go infinite with Sprout Swarm after two turns, despite him dropping five more creatures (including a Burning-Tree Shaman, which is useless against this part of the combo).

He gets first-turn Icatian Javelineers, second-turn Icatian Javelineers, third-turn Glorious Anthem, fourth-turn Glorious Anthem, fifth-turn Serrated Arrows. I get multiple Forbidden Orchards, and even though I Remand an Anthem and an Arrows, I'm facing down a horde of 3/3 creatures. I get double Llanowar Elves and double Essence Warden, and manage to stick one of each. I get stuck at three mana after dropping Intruder Alarm, but if I had drawn a fourth mana source, I would have been able to go infinite.

I misclick and put a Utopia Sprawl on the Forest I use to tap for the Sprawl, instead of an untapped Forest. As a result, I play Imperious Perfect a turn late (after Wren's Run Vanquisher), which then lets him put Faith's Fetters on my Perfect (instead of me having a 2/2 in play), which keeps me from potentially winning a damage race on the ground versus in the air.

Even with that misclick last game, I still probably would have lost the match because I was forced to double-mulligan. In fact, over the course of five games, I ended up taking a whopping four mulligans—way too many to feel comfortable with. I decided that I was going to add more lands to the deck, and that I was going to take the deck into the competitive room. The first change I made was to take out the Coiling Oracles—I wasn't getting steady access to blue and green mana by turn two, so often it would be a dead card in my hand. The second change was to add in three Merfolk Looters—I don't have a way to get Intruder Alarm other than to just draw it, and being able to zoom through my deck with Looter would make getting key parts of my combo easier to get.

For next week's article, I'm going to talk a little bit more about the construction of the mana base, and talk about building a sideboard for the deck, along with taking the deck to play with the competitive players. See you all next week, and may you have infinite Elves, Saprolings, and comments in the forums about the definition of budget!