first thing everyone did when Fifth Dawn was released was email me about Krark-Clan Ironworks. While I was gracious for the pile of email, I couldn't cover that deck yet since Fifth Dawn wasn't out on Magic Online yet. Since this column is primarily geared for the Magic Online audience, sometimes the topics you want to hear about get pushed back a while – in this case, a long while.

Combo decks always make very popular budget decks, because if the combo can be built on a budget, the likelihood is that it is nearly as good as the fully tricked out version. Combos, in essence, are simple things. They usually aren't done with fancy, expensive cards. In retrospect, it is the cards that find or accelerate out the combo pieces that are typically the expensive parts of any combo deck.

This in mind, here is the deck you have all been emailing me about –well sort of. You see, most of you want to use Krark-Clan Ironworks with two Myr Retrievers, letting you go infinite with Storm or something. I propose doing something a lot more conventional. Most “KCI” (Krark-Clan Ironworks) decks use Myr Incubator along with Goblin Charbelcher or Goblin Cannon. 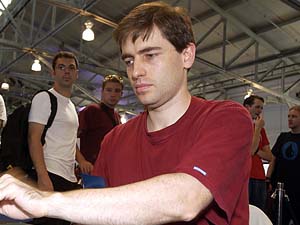 Manuel Bevand, Worlds ‘04 You simply play out as many artifacts as you can, drop a KCI, sacrificing 6 of the artifacts in order to play a Myr Incubator and activate it right away. This will let you either attack with all those tokens next turn or you can sacrifice the tokens to get mana. You can use the token mana to draw the remaining cards in your library with Chromatic Sphere and all of the card drawing spells in order to find a Goblin Cannon. Then sacrifice the rest of your tokens to activate the Cannon 20 times, winning the game.

This combo is not anything earth shattering; it has been around for a while, and was even used by Magic geriatric Manuel Bevand to make Top 8 at the just-completed World Championships. While his version was not on a budget, there is not a giant difference between most builds of KCI – perhaps a few cards.

Building on a Budget: KCI

This deck plays out by trying to get as many artifacts in play as possible over the first few turns while using card drawing and Fabricate to locate the following cards: Krark-Clan Ironworks, Myr Incubator, and Goblin Cannon. Theoretically you don't need the Cannon to go off, but you will need it sometimes. Just play out your Pentad Prisms and Talismans to build your mana base. Then, when you are able to pull off the combo, go for it! I know this isn't a very long description of what happens in a given game, but the games are pretty short, with little interaction. This is more of a Spike deck – not much fun for either party involved, but you will win a lot.

Tips on Playing the Deck

Adding More Money to the Deck

You can add lots of different things in here. You can make it like Manuel's build. This will make it Standard legal whereas mine is Block legal. You can add Chrome Mox or Engineered Explosives. These are very good because, when needed, they can just act as 0 drop artifacts that do nothing. This means you can sacrifice them and maybe use them to go off the same turn you drop Ironworks. Things that slow down your opponent are also good. Notice how Manuel's build uses Condescend and Mana Leak. These are good because they give you more time to set up before you die. Remember, you are not trying to answer their threats, you're just trying to live long enough to get the job done! A true combo deck indeed.