I've always found the column title "Building on a Budget" misleading. Most of us equate a 'budget' to "a specific plan to conserve money." However, I believe that no human on Earth has a shortage of money. That's right, both you and me are potentially as rich as the richest King of Siam.

Magic, movies, sports—all recreational activities are competing for your time (both free time and your expendable income). Suffice it to say, nearly everyone else in the world can't "budget" as much time to Magic as I can, since I own thousands of cards and playsets of the best Magic deck-building material in the game (there are frequent quips around the office wishing that "all Magic customers were as fanatically devoted as Nagle.").

The opposite is a very interesting question to Wizards of the Coast: What is the least amount a Magic player can invest into Magic and still be considered our customer? 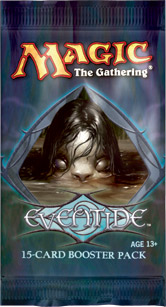 Every Magic player initially starts from nothing. Today's column will be the day that Level 1 Magic Players test their wills, charging into battle armed with nothing but an Eventide booster pack. My opponent is my brother Daniel, who hasn't played Magic regularly since Lightning Bolt was legal in the format that wasn't even called Standard yet. 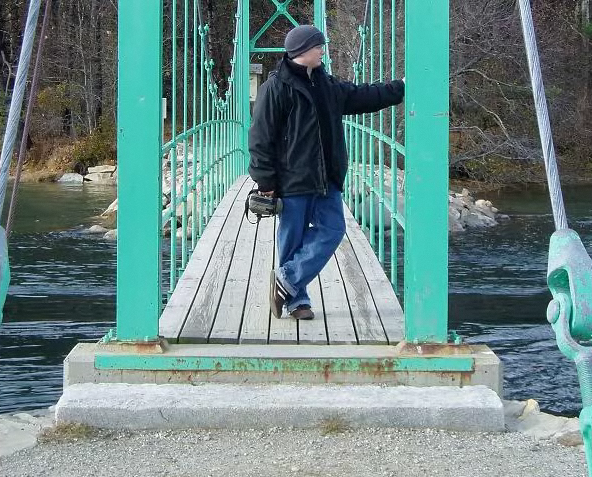 Pack War (also called "MiniMaster," as pioneered by Mark Rosewater and Henry Stern) is simply a booster pack plus some basic lands to create a deck. I use a configuration I've found best: three of each basic land gives you a prayer of playing

spells (Thunderblust, Phosphorescent Feast). A good additional rule is that lands have "Cycling C", similar to Secluded Steppe and Tranquil Thicket, which adds card flow, gambits of forfeiting your shot at CCC and CC cards, and decking greediness. For simplicity and to showcase the hybrid and retrace mechanics, we didn't use that rule—there are enough decisions in Pack War without adding a complex layer of powerful land cycling.

For variety's sake, we played three games of Pack War using a total of six Eventide booster packs. To maximize suspense, we don't look at our boosters as we shuffle our decks, which makes the discovery of your uncommons, rare, and perhaps foil all the more exhilarating!

My opening hand has Riverfall Mimic, Cinder Pyromancer, Desecrator Hage, and my rare Thunderblust. The all-creature pack is the best kind of booster pack in Pack War!

Daniel has a turn-two Duergar Assailant while I make my Riverfall Mimic, even though the Assailant bosses my unpumped 2/1 Mimic around. I have Cinder Pyromancer next turn, but he nukes it with Inside Out (!).

Daniel has the most insane possible play next turn with Scourge of the Nobilis on his Duergar Assailant! The swing and pump ends with Daniel's 24 life to my 15 life. I attack back with a 3/1 haste Heartlash Cinder and Mimic, while Daniel adds both Bloodied Ghost and Nip Gwyllion to his team. I have a Shrewd Hatchling for a gang-blocking prayer, but I scoop to his Springjack Shepherd on turn seven, because the triple-Mountain requiring Thunderblust is never getting through six 0/1 Goat tokens.

Daniel had two targets for his Scourge of the Nobilis, and indeed it was a complete wrecking ball (I told Daniel that card was 'engineered' to be insane).

I'm first this game, and after two uneventful turns for either of us, I hit Daniel with a perfect turn-three Moonhold, earning an expletive from him. As a consolation, he used his Beckon Apparition on the Moonhold now in my graveyard rather than having to discard.

Next I have Riverfall Mimic then a Cinder Pyromancer, but I refuse to trade my 2/1 Mimic for his 1/1 flying Spirit that's on defense. Daniel adds Ballynock Trapper and goes offense with his token.

I topdeck the powerful Flickerwisp (uncommon), which ends his token's life, and my Mimic attacks. Daniel adds his rare, Glen Elendra Archmage, to aid his Trapper. Daniel taps my Mimic, so I decide to trade my 3/1 Flickerwisp for a persist counter on his Archmage. The Archmage won't stop the Trapjaw Kelpie I just topdecked, but it could counter potential bomb spells in my deck.

We go back and forth for a turn, wherein my Trapjaw Kelpie becomes the "trapped" creature, so I decide to trade my never-seems-to-activate Mimic to finish off the Archmage. Daniel, however, has Endure to save it.

Daniel adds Wickerbough Elder and swings with his Archmage to put Daniel at 14 life to my 18 life. I continue to land flood with no retrace in sight, but draw a foil Smoldering Butcher (the game designer in me here thinks that there could be a "Foils are more awesome!" Pack War rule, like letting them cantrip or copy themselves once).

I drop the Smoldering Butcher knowing it's just going to move the Trapper from my Trapjaw Kelpie to the Faceless Butcher, but Daniel has a Puncture Blast (I prefer to call this card by its playtest name, "Witherbolt") to kill my Kelpie with no Persist.

I land-flood some more and draw Tilling Treefolk, yet another card that makes me wish I had a retrace card. My Cinder Pyromancer has pinged Daniel down to 10 life, but I'm only at 4 from the incessant 1/1 Glen Elendra Archmage and Wickerbough Elder. I finally topdeck a useful card in Soul Reap, but I quickly discover that Wickerbough Elder is green AND Glen Elendra Archmage can simply counter the Soul Reap. I hang on for another turn because I might draw my rare (which could be a bomb like Hallowed Burial), but I draw one of the three lands left in my library. My brother shows me the Duskdale Wurm he's been wanting to play all game.

HOLY COW, I could've used those Aerie Ouphes to kill Glen Elendra Archmage! I find my rare to be Helix Pinnacle, which I would've gotten up to maybe fifty counters that game. I show the card to Daniel, since I designed it, and he exclaims, "A hundred mana to win! Why not just use Fireball?" I told him, "Because it's five times more difficult to win with this card over Fireball. That's the whole point!"

My opening hand has Beckon Apparition and a Puncture Blast. Daniel opens up with turn-one Nip Gwyllion, which hits me three times. Daniel plays Sturdy Hatchling which earns my precious "Witherbolt" and gives me a target for my Beckon Apparition.

On turn five, I block his Nip Gwyllion with my 1/1 white and black Spirit token, to which Daniel drops an all-upside Canker Abomination (!).

I take 6 damage from the Canker, then topdeck a timely Smoldering Butcher that will be happy to shrink the 6/6 down to a 2/2.

Daniel attacks anyway, so I block; he didn't know Smoldering Butcher had wither because in the previous game he just tapped it every turn with Ballynock Trapper. I add a Kithkin Spellduster (not a combo with my Antler Skulkin), while Daniel adds a lonely Kithkin Zealot.

I topdeck an absolutely monstrous Duskdale Wurm but lack the second Forest to play it. My Kithkin Spellduster gets in there a couple times to put the life totals at 13 for Daniel and 11 for me (ouch, Canker Abomination!). My next topdeck is Swirling Spriggan, who also demands a second Forest. Daniel flashes in a Trapjaw Kelpie that I choose to trade with my Antler Skulkin for a -1/-1 counter.

Next is the Forest I've been waiting for, and down comes Duskdale Wurm! "That's thing's huge!" Daniel exclaims. Daniel then plays his rare, Endless Horizons, which he has to read a couple times, then looks through his library only to realize he's already drawn the three Plains in his deck. "Well, that sucked," he replies, in preparation for my Duskdale Wurm attack.

My next topdeck seals the game: Soul Snuffers. I play the Soul Snuffers first, then Hungry Spriggan, allowing my 6/6 Duskdale Wurm to crash over his 1/1 Trapjaw Kelpie, 1/1 Canker Abomination, and 0/2 Kithkin Zealot and win the game next turn.

I'm sure everyone reading has played some kind of cooperative video game with a friend where you are the Wizard and your friend is the Warrior. There's a mutual acknowledgement to each other that you get to pick up all the Wizardly items and powerups while the Warrior gets the battleaxes and heavy armor, since game design usually makes such items mutually exclusive.

Using our very natural gamer inclinations, Dan and I split the cards up like so:

While the majority of Eventide booster packs in the world are simply shorn of their wrappings, torn open, and "experienced" in a span of five seconds, Daniel and I managed to squeeze a considerable amount of time, gameplay, and fun from each of our booster packs. Of all the cards we opened and played with, Daniel told me he was most fond of Scourge of the Nobilis and Duskdale Wurm.

If the Pack War format is new to you, I hope you can see all the different layers at work in a Magic set. I have read every Eventide thread across four websites, and it's startling how many players wish Magic revolved around them. Every Magic player has their own needs, wants, and ambitions, from my brother Daniel Nagle with his budgeted three Eventide booster packs (Duskdale Wurm) to the meticulous Mike Flores with his metagaming and sideboards (Overbeing of Myth) to Magic designer and fanatic Kenneth Nagle with his seven Elder Dragon Highlander decks (Helix Pinnacle).

A player like Daniel, who plays on average one Magic game per year (and only when his brother asks him to), can deduce with little effort that Duskdale Wurm is the boss of Pack War.

That's all the time budgeted for this week. Come back next week for something else entirely.