elcome to Level Up Week here on magicthegathering.com. A lot of people were skeptical about the new Level up creatures when they were first previewed. The naysayers have been proven wrong. Level Up creatures are all very high picks in Rise of the Eldrazi drafts, and any on-color levelers are sure to make the cut in any Sealed deck. I'm here to talk about Constructed, though. 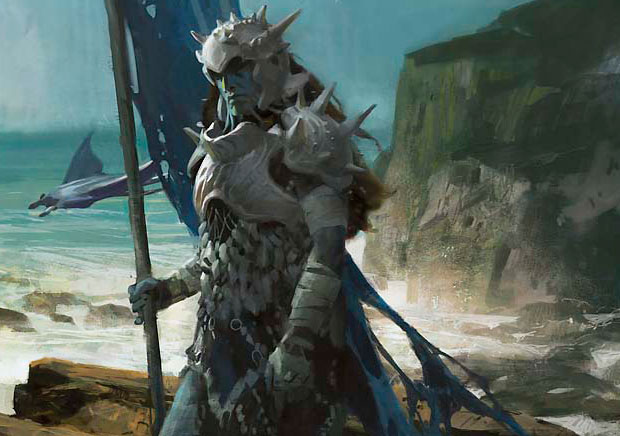 So far, the only level up creature to get its due has been Kargan Dragonlord. I fell in love with this card the moment I saw it. It's basically a red Baneslayer Angel. It's a simple one-for-one if your opponent has the removal spell. It ends the game very quickly if your opponent doesn't have that precious piece of removal. When people intially argued with me about its playability, I gave them this scenario: Would you play an 8/8 flying, trample, firebreather with echo? Kargan Dragonlord can be that card, and it has a ton of other applications.

There are a lot of other levelers that clearly have what it takes to battle in Constructed. Coralhelm Commander seems like it's going to see a lot of play in Extended and Legacy Merfolk decks, but I don't think it's too weak for Standard at all. Even if you play very few Merfolk it's still a 3/3 flyer that attacks on turn three; that's really impressive. 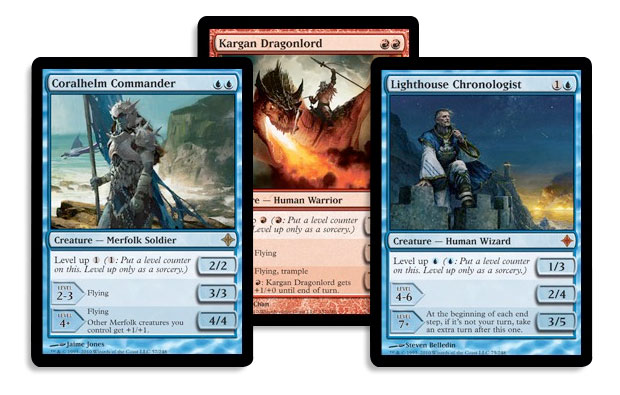 Lighthouse Chronologist is another powerful level up creature that seems terribly undervalued. Once this card gets active, it seems very hard for any opponent to keep up with the card/tempo advantage you gain by taking two turns every time they take one.

I wanted to play with the less hyped level up creatures that seem most powerful to me.

Mono-Blue Fish is an archetype that has seen a lot of success throughout the history of competitive Magic. I knew the deck would have trouble with Bloodbraid Elf decks, but the rest of the format seems pretty soft against a classic aggro-control Fish-style deck.

Cosi's Trickster hasn't seen any play since it got printed last fall. I feel like there are enough fetchlands these days to get an Isamaru, Hound of Konda at least half the time. The twenty percent of the time that this becomes a natural 3/3 will be happy times for this deck's pilot. Cosi's Trickster is a Merfolk, this means it will be getting a bonus off our Coralhelm Commander. I really wanted a one-drop Merfolk, and this seems like it's our best option.

Coralhelm Commander is incredible. I'll be happy to play a full four of these in my deck. The card provides an evasive clock all by itself. It pumps the second, third, and fourth copies of itself and also makes our Cosi's Trickster a little beefier.

Lighthouse Chronologist is Building on a Budget friendly these days. Chronologist works on the same theory as Baneslayer Angel and Kargan Dragonlord. The game ends if your opponent does not stick a removal spell very soon.

Calcite Snapper: This is probably one of the best unsung heroes of the new standard. A friend of mine was playing Red-White-Blue Planeswalkers at a Pro Tour Qualifier this last weekend and he told me that he played against another Red-White-Blue deck packing Calcite Snappers and it was very difficult to win through a 4-power creature with shroud. This card shines very bright in the current Standard. It does a lot of work against the control decks and it works beautifully as a blocker against the aggressive strategies of the format.

Horizon Drake: I've always been a fan of 3-power flyers for three. Horizon Drake's "bonus" ability is surprisingly relevant. I played a few games with Illusionary Servant on the premise that blocking Sprouting Thrinax would be more important than protection from lands. I was wrong, though, Celestial Colonnade is a great defensive land and savvy White-Blue Control players will try to get some free cards when you attack. Horizon Drake has no problem swooping past Stirring Wildwood or Celestial Colonnade.

Negate: This is one of those sideboard cards that seems to come in about eighty percent of the time. Whenever these things start to happen, I try to find a deck that can play the card in the main. I don't think there are any decks left where Negate is dead. In some match-ups, it's the best possible card you could have in your deck.

Deprive: I have a lot of friends that draw similarities between this and Counterspell. I'll start by saying that Counterspell is far superior to Deprive, especially in control decks. When playing a control deck you counter spells with the intended goal of getting to a late game where you can do more powerful things than your opponent. These powerful things usually cost a great deal of mana. Every time you counter a spell in the first few turns, you do it with the goal of getting another land into play. That doesn't mean Deprive lacks a home entirely, though. Deprive is truly incredible in aggressive decks that can use the extra time to beat some face. It also seems like a very nice addition to combo decks like Polymorph.

Unified Will: This deck has an aggressive curve that ensures we have more creatures than our opponents do. Unified Will may not be very impressive on the draw against certain decks, but all those decks (Red, Jund, Vampires) seem like very bad match-ups. This deck is designed to punish combo and control players, not aggressive decks.

Into the Roil: I wanted the deck to have a catch-all answer. Into the Roil is a great way to deal with something that gets through the cracks of our wall of countermagic. For example, it's very likely that we use our second or third turn to tap out for a threat. Our opponent will probably follow suit and cast a threat of their own. You probably want to leave open countermagic after you have a winning board presence. Your opponent will probably stumble eventually and not play a spell on their turn. Use this opportunity to Boomerang their threat and you now have a much superior board presence.

The level up creatures have some conflict with our counterspells, but it's important to remember that we don't need to use all our mana to level every time. In fact, a deck like this can get a lot of extra value out of its bluffs. If I only level something a few times and decide to leave open two islands there is a much smaller chance my opponent will pull the trigger and go for a Day of Judgment or Martial Coup.

4 Negate 4 Deprive 4 Into the Roil 4 Unified Will 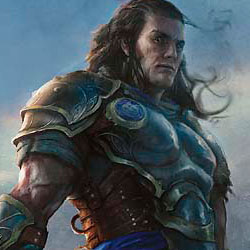 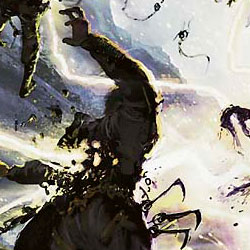 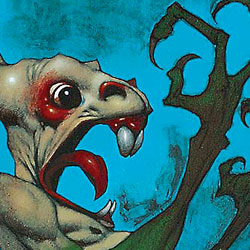 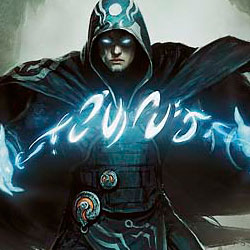 The deck works very well against the combo and control decks that are doing well in Standard right now. The deck certainly has a lot of trouble with Jund and Red, but if those aren't very popular in your area then Fish may be a good choice for your upcoming FNMs. Remember to keep up mana for your countermagic and you'll have fun beating control players all day long.