ello, and welcome to another edition of Building on a Budget. I'm glad last week's article was so well received. I will make a conscious effort to keep the columns fun, interesting, and innovative from this point forward.

Remember those cards I previewed a few weeks back? The mana-fixing artifacts? Yeah, these things.

One of the big problems with the list I talked about a few weeks ago was its ability to actually draw a Bloom Tender. I had included Elvish Harbinger to find the Bloom Tender and help fix my mana, but most people thought that was too clunky. (I agree.)

Alara Reborn bailed me out, though. Violent Outburst is a card that caught my attention quickly.

You can abuse the cascade spells that costs three to play in a lot of ways. Simply build a deck that only runs one playset of cards that costs less than three.

In formats like Extended you can guarantee that you play a Hypergenesis. (You can even accelerate to your cascade spell with Simian Spirit Guide) You've presumably built your deck around this interaction, and the resolved Hypergenesis will assuredly win you the game right away. (Piles of Akromas, Dragons, and Demons tend to do that.)

In Standard we can use them to guarantee putting a Bloom Tender into play. It isn't as exciting as Hypergenesis, but Hypergenesis seems to be sold out everywhere.

Another card from the new set that makes this deck a lot better is Lavalanche. We don't want to play cards like Mind Spring or Mind Shatter anymore because their converted mana cost is less than three. I don't want to whiff when I play a Violent Outburst. Lavalanche replaces these cards as a win condition quite nicely.

I'll start by explaining each of the cards in the deck.

Bloom Tender: The first combo piece. Bloom Tender can create infinite mana or just attack for infinite damage. It's very important to play a full four of these to maximize your chances of drawing one.

Umbral Mantle: The next piece of the puzzle. This piece of equipment lets your Bloom Tender do very scary things. Don't leave home without a full four.

"I have infinite mana now. What am I going to do with it?"

Lavalanche: I like dealing arbitrarily large amounts of damage to my opponent. What's even better is dealing that damage to all their creatures too. It's important to note that Lavalanche is actually quite good on its own. If you have five mana at your disposal you can cast a one-sided Pyroclasm. Sometimes you just need to pay four and kill all of your opponent's 1/1 tokens. This is a very powerful card that I expect to increase in value steadily once people realize how good it is. I'd pick up three or four while they're still cheap.

Violent Outburst: In our deck, it's an instant-speed Bloom Tender.

Diabolic Tutor: Sometimes you just need to find something. Whether it's an Umbral Mantle or a Lavalanche, you're always happy to have a tutor.

Kitchen Finks: We need a way to survive until we combo. Kitchen Finks is a very good way to slow our opponents down.

Jund Charm: Sometimes you just need another board sweeper.

Borderposts: These power up our Bloom Tender and fix our mana.

Vivid lands: The Borderposts are great, but this deck needs to make a lot of different mana symbols.

Once we cram some numbers the deck looks like this:

If you do the math, the deck has:

I was lucky enough to get accepted into Alara Reborn Beta on Magic Online. So I took the deck for a test drive in the casual room there.

I didn't get a chance to build a sideboard for the deck for a two reasons: First, we don't know what the metagame will look like after Alara Reborn. Second, we don't want to use cards that cost two or less because it will mess with our Violent Outburst plan, so deciding on sideboard cards is extraordinarily difficult. Instead of giving you a bad sideboard, I'd rather leave the sideboard as an open-ended question for you guys to sort out depending on your given metagame.

Round 1 vs. Red-Green Elves 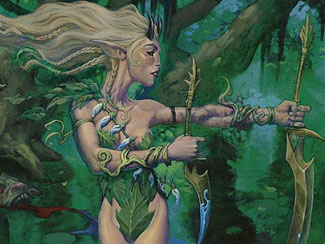 I win the die roll and keep Island, Forest, Veinfire Borderpost, Firewild Borderpost, Kitchen Finks, Violent Outburst, and Umbral Mantle. I play my Forest and a Veinfire Borderpost and pass the turn. My opponent plays a Llanowar Elves and passes the turn back. I replay my Forest, and bounce it again for a freshly drawn Wildfield Borderpost. My opponent attacks for 1 and plays a Wren's Run Vanquisher revealing Bloodbraid Elf. I draw Diabolic Tutor, play my Forest again, and tap out for Umbral Mantle. My opponent attacks for 4 and plays another Vanquisher showing me the same card. I draw a Plains, play a land, and bounce the Forest for the other Borderpost before passing. My opponent draws a third land and taps Llanowar Elves and three lands for Bloodbraid Elf. It cascades into Imperious Perfect, and he attacks me for 12 and passes the turn with me at 3 life. I play Violent Outburst on his end step to put Bloom Tender into play. On my turn I create a few hundred mana by tapping and untapping the Bloom Tender with Umbral Mantle and use my Diabolic Tutor to go find a Lavalanche. I cast Lavalanche for 230 and my opponent comments on how lucky I was to hit Bloom Tender with my Violent Outburst. 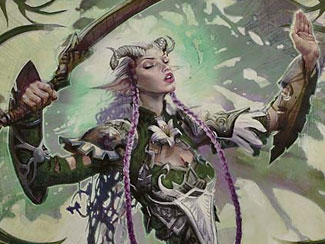 Round 2 vs. Five-Color Aggro 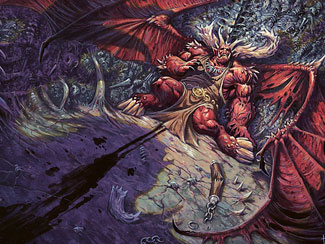 I keep Island, Firewild Borderpost, Fieldmist Borderpost, Lavalanche, Umbral Mantle, Violent Outburst, and Bloom Tender on the draw. He plays a turn-one Vivid land and passes. I draw a Forest and play Fieldmist Borderpost before passing. He plays a land and a Mind Stone and passes. I draw Diabolic Tutor, play my Forest, and play Bloom Tender. He taps out for Bloodbraid Elf, reveals a Jace Beleren, and draws an extra card before passing. I play my Umbral Mantle and attack for a bajillion, and he blocks. On his turn he plays a Shriekmaw and kills my Bloom Tender. I draw a Mountain, play a Borderpost, bounce my Island, play my Mountain, and pass. He simply attacks and passes. I decide to hold the Violent Outburst for a time when he's tapped out. I draw another Umbral Mantle, play my Island, and pass. This goes back and forth for a bit. Eventually I draw Bloom Tender, play it, equip my Umbral Mantle, and pass. He taps everything except his Mind Stone and plays Cruel Ultimatum. I discard three irrelevant cards and am left with Violent Outburst and Lavalanche. He pauses forever during his attack step and decides not to attack. I play Violent Outburst on his end step, which coaxes an "I knew it!" from my opponent. It was a good play not to attack on his part. Unfortunately for him, I had the Lavalanche and was able to generate infinite mana and blow him up. My opponent would probably have won this game 100% of the time if he knew I had Lavalanche.

Round 3 vs. Red-Green Stompy or is it Sligh, I'm not sure. 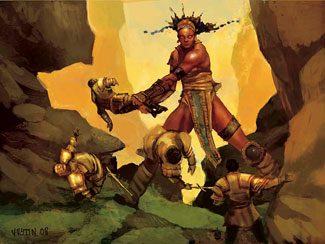 I lose the die roll, mulligan a hand with no basics, and keep Swamp, Fieldwild Borderpost, Diabolic Tutor, Umbral Mantle, Kitchen Finks, and Jund Charm. He plays a Tattermunge Maniac and passes. I draw a forest and play my Borderpost. He attacks me for two, plays Bramblewood Paragon, and passes. I draw an Island, play my Forest, and pass. He plays Giantbaiting with conspire and attacks for 10. Didn't I write about that? I draw a Mountain, play it, and play my Kitchen Finks, going back to 10. My opponent, attacks for 2 with Tattermunge Maniac and I block, going to 12 when Kitchen Finks persists. He then plays Bloodbraid Elf and cascades into another Bramblewood Paragon. I draw a Diabolic Tutor, play my land, and pass. My opponent attacks with his team and I'm forced to use a Jund Charm. Unfortunately for me the first Bramblewood Paragon gets Colossal Mighted, as does the Bloodbraid Elf. I lose. 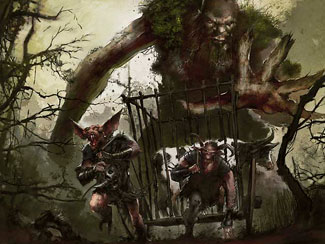 In retrospect, I'm not sure how well the deck would fare if my opponents knew what was going on. The deck is a lot of fun and has some cool ideas that can be expanded on in a lot of different ways. I hope you all enjoyed reading about this and got some fun new ideas of your own.

As always, I'd love to hear your comments in the forums.