Hello everyone. I'm Michael Gills (just call me Mike), the Community Outreach Manager for Magic: The Gathering and some other Wizards properties. I'm also the acting Tournament Manager for Magic Online, and in this capacity I want to share the future direction of Organized Play for MTGO.

Organized Play: What Is It?

Before we get to Magic Online improvements, I'd like to give you some of the basic theory of organized play to help you understand where we are going.

Organized play is pretty much what it sounds like: play that is organized. To entice players to join in, organized play programs offers various components, like a consistent set of rules that makes it easier for people to play together, scheduled opportunities for competition, and in most cases rewards for participation and/or doing well.

The benefit of organized play for a business is that encourages more people to play their game and to play more often. The benefits for the player are more varied and include socializing opportunities with other fans, different levels of offered competition, and all sorts of rewards to be earned.

A robust organized play program needs to offer a full spectrum of play opportunities from quick casual play all the way up to epic championships for the elite to compete in. You can see an example of this with the full gamut of programs offered for Magic: The Gathering. These range from casual play with your friends using the official rules to local tournaments and Friday Night Magic through Prereleases and Launch Parties to the Grand Prix and convention events and up to National Championships and the Pro Tour.

While most players don't participate in every level of programs offered, it is important to offer the entire range of competition for players to have something to aspire to. After all, while many of us enjoy playing basketball with our friends, only some folks get to play on their school teams, and even fewer in the NBA. But it is the dream of being the next Michael Jordan that makes the game fun for many. 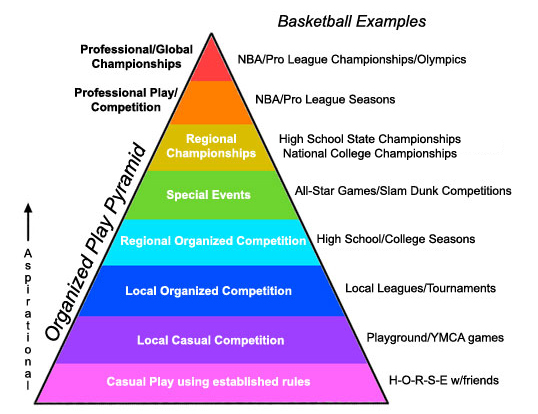 Magic Online: Many Levels of Competition

Currently, Magic Online fills in some of the bands of the Organized Play Pyramid with Casual Play, the 8-player queues, Daily Events, and the occasional Release events. Now that Magic Online III has had many of its stability issues worked out (and new teams have been created to continue technical development), it is the right time for fill in more of it.

So for your edification, allow me to introduce the Magic Online Organized Play Pyramid, or what I like to call the "MTGO Mountain." 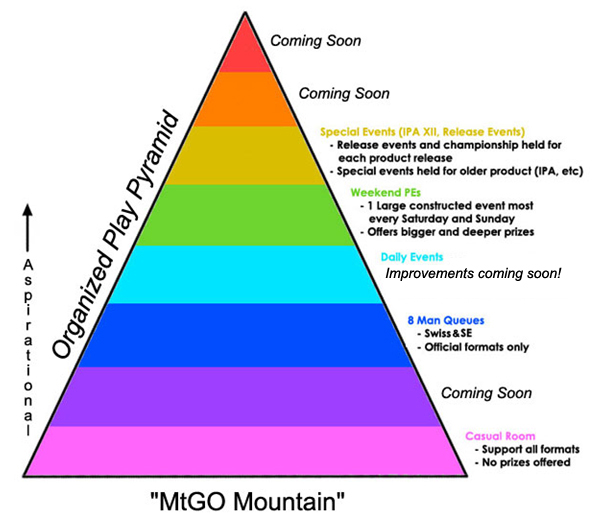 There are a lot of things for you to notice, so I will start at the bottom and work my way up.

The main improvement here is that we will fully support all formats. This means that we will be reviewing and improving the existing unofficial formats like Prismatic and Singleton while also looking to add another format or two (Pauper perhaps?), and even another official format in the near future.

Many of you have seen that we are experimenting with Swiss 8-player queues in the Constructed room. While the feedback has been mixed, it is a tournament type that guarantees three rounds of play that fits in nicely in many players' schedules. We are tracking it and will continue to tweak the queues until they are just right.

Some big changes and improvements coming with these soon!

Some of you may have followed the discussions we have about supporting constructed play in our forums. If not, I recommend getting involved with the various conversations in the Magic Online General forums.

Starting on September 20th, we will be running one big Constructed event every Saturday and Sunday (when we are not running special events) all year! They will have the same entry fee as similar Daily Events but will offer bigger and deeper prizes! And for those of you looking for some serious competition, these events will include Top 8 play.

We will announce the schedule for all of the events for the rest of the year in advance so you have plenty of time to prepare for the competition!

While you already know about the release events we run after each new product joins MTGO we will be adding to them by including culminating championship events. Play in as many of the release events as you want and see if you can qualify for the Release Championship where you can play for big prizes!

In addition, we will also be bringing back special events for older products. Did you miss out on some of the original expansions sold on Magic Online? Try to qualify and compete in the Invasion block, Odyssey block, or Onslaught block championships that are returning to our schedule for your enjoyment.

Check out the MTGO Event schedule page for the full list and details about all of these events.

Does this seem like a lot? Did you notice that three of the bands on "MTGO Mountain" aren't detailed yet? Do you get the idea that we're serious about Magic Online organized play?

There are many others improvements being discussed (additional types of prizes, tie-ins with paper Magic premiere events, new fun formats, even smaller and larger events, and more). It is as important to try new things as it is to admit when we are wrong and try something else.

The changes we make need to support the basic tenets of organized play (good for business and good for you!), so we will add them slowly, track sales and play metrics, and, most importantly, gather your feedback.

So what do you think? Are you as excited as I am or do you think we're crazy? Hop into our Magic Online forums and let us know what you think!