t's been a year since the Lorwyn Prerelease. I remember the tournament well, though. I opened a card that got me really excited.

Very little explanation is needed for those of you that had the pleasure of playing with Mirror Entity in Limited. The card outright wins games. It demanded that your opponent have a removal spell right away. I expected this card to be a runaway Constructed hit. Unfortunately, it never really caught on. I still can't figure out why this card hasn't seen much play. In honor of my favorite Lorwyn rare ... may I humbly present "Mirror Mirror."

Overall, it's a pretty straightforward concept. However, there are a few hidden gems here. You can use Heritage Druid to protect the Mirror Entity and his minions the turn you play them:

Each card plays a particular role in the deck's inner workings.

Llanowar Elves: Llanowar Elves ramp us into our powerful token producers like Cloudgoat Ranger and Spectral Procession. Once Mirror Entity gets going, any size body becomes an extremely relevant threat.

Devoted Druid: Devoted Druid ramps our mana very quickly. We can play this fine young lady on our second turn and use it to play a Cloudgoat Ranger on our third. It can also be used to combo with other cards in our deck. We can activate our Mirror Entity for an arbitrarily large amount and use our Devoted Druid to play whatever our hearts desire.

Mirror Entity: Not much needs to be said for this card. The deck is built around abusing the current lack of Wrath of God effects in the casual room and nothing takes advantage of that more than Mirror Entity.

Hunting Triad: Our deck wants to be playing a lot of token production. Hunting Triad doubles as a combat trick.

Spectral Procession: Three fliers for one card. This seems absolutely amazing to me.

Cloudgoat Ranger: The best of all the token producers in the deck. Cloudgoat Ranger is an amazing threat on its own and can become especially absurd when you're combining it with a Mirror Entity or Ajani Goldmane.

Activate Ajani, swing with my team, before blockers are declared; tap three tokens give Cloadgoat Ranger +2/+0 and flying.

Crib Swap: A removal spell for problem cards. You can search for it with your Harbinger.

The deck seemed pretty tight, so I brought it into the casual room to play some games. 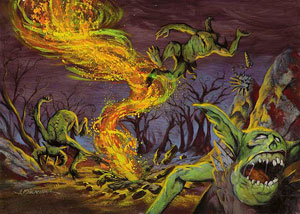 Round 2 vs. Red Burn 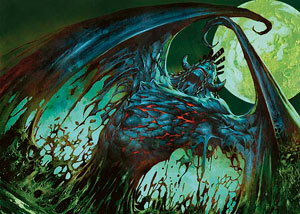 I kept Forest, Llanowar Elves, Plains, Mirror Entity, Spectral Procession, Plains, and Hunting Triad on the draw. My opponent played a Ghitu Encampment and I played my Elves. My opponent had a second-turn Incinerate for my Elves. I played a second land and played the Heritage druid I had drawn. My opponent played a Boggart Ram-Gang and attacked for 3. I drew Crib Swap, played a land and passed. My opponent attacked me and I played the Swap. My opponent passed. I played Hunting Triad, and my opponent played Flame Javelin targeting me. On his turn he played Demigod of Revenge. I went to 8. On my turn I played Spectral Procession and Devoted druid. He attacked with the Demigod and I blocked with a token. I played Mirror Entity the next turn. He attempted to Incinerate the Entity but I activated it for 4. On his turn he played another Demigod and attacked with both. I untapped my devoted druid and activated my Mirror Entity. I tapped six untapped "Elves" and activated the Mirror Entity for 6. I blocked both Demigods. The next turn I was able to swing for lethal damage.

Round 3 vs. a black deck with Underworld Dreams 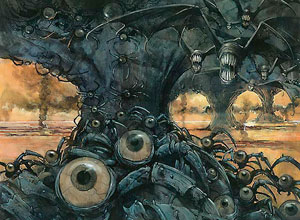 I kept Forest, Plains, Plains, Plains, Devoted Druid, Cloudgoat Ranger, and Mirror Entity on the draw. My opponent played a Swamp and passed. I drew a Llanowar Elves, played it, and passed. My opponent played another swamp and Terrored my Elves. I played Devoted Druid and passed, and my opponent played a turn-three Underworld Dreams. I untapped, drew Crib Swamp, and played Cloudgoat Ranger. On his turn he played another Underworld Dreams. I played Mirror Entity and attacked with my team, making everything a 2/2. On his turn he untapped and played a Cruel Edict, then another. I sacrificed two tokens. On my next turn I activated my Mirror Entity for 5 and attacked to end the game.

Round 4 vs. White Control 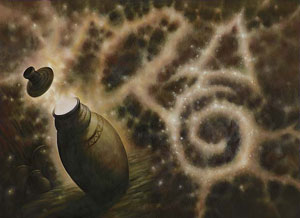 Round 5 vs. Red Creatures 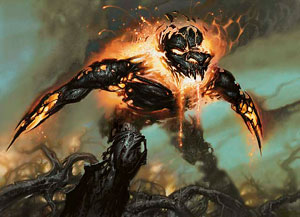 I mulliganed on the play and kept Forest, Plains, Forest, Treefolk Harbinger, Spectral Procession, and Hunting Triad. I played the Harbinger and fetched my Mirror Entity. My opponent played a Mountain and a Goblin Mountaineer. I untapped, drew another Spectral Procession, played another land, and passed. He played Mudbrawler Cohort and attacked with both creatures. I blocked the 2/2. I drew a Devoted Druid and played it. He attacked with both again, and I blocked both. He tapped out for Ashenmoor Gouger. I untapped, drew a Plains, and played Spectral Procession. He attacked with everything again, and I blocked all except the Gouger. I drew Cloudgoat Ranger and played it. On his turn he attacked with just the Ashenmoor Gouger. I took the 4, then he played another Gouger. On my turn I drew a Heritage Druid, played the Mirror Entity and the Druid, and attacked for some damage in the air. He attacked with both Gougers, and I blocked one with my Harbinger. He played Spiteful Visions. On my turn I drew a land and Ajani and played them both, gave my team some counters, and attacked with everyone. After blocks, I activated my mirror entity for 1 and then used all my creatures to make more mana with Heritage Druid. All my guys ended up being 8/8s, and I won that turn.

Round 6 vs. Mono-Blue Control 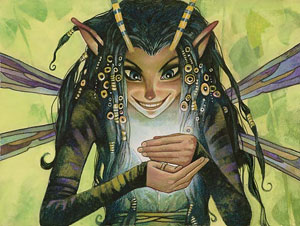 Round 7 vs. Red-Green Aggro 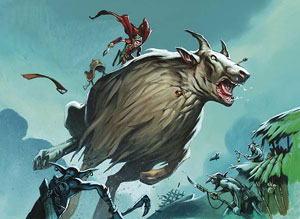 On the draw, I kept Llanowar Elves, Heritage Druid, Trefolk Harbinger, Forest, Mirror Entity, Plains, and Cloudgoat Ranger. My opponent played Llanowar Elves on turn one, and I mirrored the play. On turn two he played Troll Ascetic and passed. I played my Harbinger, getting another Mirror Entity, and played my Druid. My opponent played a Blanchwood Armor on his Troll (with two Forests in play), attacked me for 5, and passed. I drew and played my Mirror Entity. On his turn he played another Forest, Incinerated my Mirror Entity, and attacked for 6. On my turn I played another Mirror Entity. He played a Puncture Blast this time and attacked again. I drew the land I needed and played a Cloudgoat Ranger. He attacked with the Troll, and I chump-blocked it with the Harbinger. I drew Hunting Triad and attacked with everyone but two tokens. (That's enough to survive one burn spell. If he has two burn spells I'm dead anyway.) I used the Triad to pump my Ranger and put my opponent on a two-turn clock. He played a sixth land and attacked. I tried to chump-block with a token, but he had Epic Proportions for the win.

Round 8 vs. White Weenie 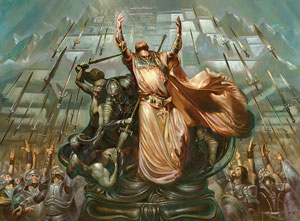 I was on the play, and I kept Llanowar Elves, Treefolk Harbinger, Ajani Goldmane, Forest, Plains, Plains, and Spectral Procession. I played my Elves on the first turn, and my opponent played Goldmeadow Harrier. I played Treefolk Harbinger, fetching my Mirror Entity, on turn two. He played a Wizened Cenn. I played Spectral Procession on turn three, and he played Kithkin Harbinger fetching up another Wizened Cenn. I played Ajani and gave my team some counters before sending in the flyers. On his turn he played the Cenn and attacked with the Harbinger. I blocked it with my Harbinger, and everyone lived. On my turn I played another land and played the Mirror Entity, gave my team more counters, and attacked with the flyers again. He untapped and played his own Ajani, killing both of them. I untapped, activated my Mirror Entity for a lot, and attacked, but he stopped me with Holy Day and attacked back On my next turn I activated and attacked for just enough to kill him, and met another Holy Day. Things went on like this until he had played all four Holy Day. Eventually he didn't have a Fog, and I won the game.

I haven't put together a sideboard yet, but I'm sure it would include Burrenton Forge-Tender. Adding a Gilt-leaf Archdruid or two would allow you to use Mirror Entity to steal all your opponents lands.

The Prerelease is this weekend, and I hope all of you are looking forward to it as much as I am. I'll be playing at the Champion Challenge at the big Prerelease in Philadelphia, so you should come by and play a match with me if you get the chance.