eedback Week is an interesting task for Building on a Budget. Most of my articles are already based on feedback or ideas that have been sent in by readers. Fortunately, this week is exceptionally exciting for those of us who love to brew. Just last week, Wizards announced Modern as the new Constructed format of Pro Tour Philadelphia. Since then, I've been flooded with emails and Facebook messages from readers who are excited to get into the trenches and battle some Modern.

Today, I'd like to talk about a Modern deck that a lot of readers have asked for. Since the announcement, a lot of you have been eager to see what my latest Second Sunrise deck looks like. "Sunny Side Up" was originally piloted by Pierre Canali and friends at Worlds in 2006. In 2008, Steve Sadin, Gabe Carleton-Barnes, Jamie Parke, and I decided that the format was in a good spot for Eggs to make a comeback.

Eggs is a powerful and consistent combo deck that wins the game on turn three or four by looping Second Sunrise and cheap artifacts that tap to draw cards. (I'll explain exactly how it works below.) It's extremely budget given the Modern-format baseline, but it's easily disrupted by graveyard hate and Chalice of the Void. This deck is a favorite amongst math nerds like myself, as the fractions of a percentage one can acquire by playing the cards in the correct order will add up fast.

We played the deck at Pro Tour Berlin and didn't do as well as we had hoped to. Since then, the Eggs deck has fallen into obscurity. It hasn't been Extended legal for some time, and its weakness to cards like Mental Misstep and Chalice of the Void have kept it from entering the fray in Legacy events.

Chalice of the Void is legal in Modern, but we have no idea how popular it will be. If Cloudpost / Gifts Ungiven control decks become popular, then this deck won't be a good choice. Right now, however, it seems as if everyone is looking at Zoo, Boros, and Jund (often Melira, Sylvok Outcast–based) strategies. Eggs is very well positioned as long as that's the case.

This deck's ability to be competitive is heavily dependent on the metagame. If players are afraid of Living End and bring in cards like Tormod's Crypt and Relic of Progenitus, then this deck might have a lot of trouble. However, if players decide that Surgical Extraction is the best graveyard hate spell because of its strength against combo, then this deck will be absolutely fine.

Surgical Extraction may seem like a nightmare, but New Phyrexia introduced a powerful spell that fits perfectly in the strategy and doubles as an incredible defense against Surgical Extraction. Noxious Revival is a strict upgrade from Reclaim that can grab the targeted card from our graveyard and put it on top of our deck even when we don't have any mana left in our pool.

A lot of you may look at this pile of cards and have no idea what it's supposed to do. The combo may be complex and difficult to pilot, but you should have no problem winning games consistently on the third turn once you master the intricacies of this strategy.

Here's how it works. I spend the first two or three turns casting artifacts that I can sacrifice to draw cards. I sacrifice all my artifacts once I find a Reshape (to tutor up a Lotus Bloom) or my Lotus Bloom comes off suspend. In doing so I draw a bunch of cards. Then I use whatever Ponders and Preordains I have to find a Second Sunrise. I use Ghost Quarter to target my own lands and search up additional islands to empty my hand of as many artifacts as possible and thin my library. I cycle Edge of Autumn and draw additional cards.

When I'm out of mana or cards, I sacrifice my Lotus Bloom for white mana and cast Second Sunrise. In doing so, I generate a huge amount of mana by bringing back all the lands that I destroyed or sacrificed along with the Lotus Bloom. All the artifacts are also returned to the battlefield, and I'm able to sacrifice them all again to draw a lot of cards. If I'm unable to find another Second Sunrise, then I use Noxious Revival to put the first one back on top of my deck and then draw it by sacrificing one of my artifacts. I cast all the artifacts I draw and use Ghost Quarter on my own lands after I tap them for mana again. I use this mana to cast more artifacts from my hand and use them to draw more cards. When I run out of mana or cards I sacrifice my Lotus Bloom and cast Second Sunrise again.

Eventually, I draw my entire library. I'm then able to use Conjurer's Bauble to loop the Second Sunrise and use Pyrite Spellbomb to deal 20 points of damage to my opponent. If my opponent has some type of Ivory Mask effect in play then I can use Sunbeam Spellbomb to gain infinite life and loop my Noxious Revivals to ensure I never run out of cards and will eventually deck my opponent.

I suggest playing A LOT of solitaire games before you play this deck in any real matches. The complexities involved in operating the deck correctly are mind boggling. It may sound extreme, but I wouldn't be surprised if Eggs was the most difficult deck to pilot optimally in the history of tournament Magic. I've played hundreds of matches with this archetype over the past five years, and I have a lot of advice for aspiring breakfast cooks.

I tend to use the following priority when casting my "eggs." I will cast Chromatic Star over every other artifact, it has the best synergy with Reshape and it requires no mana to produce card advantage with Second Sunrise. I will cast Chromatic Sphere or Conjurer's Bauble next; both have even priority because neither requires any additional mana investment to produce card advantage with Second Sunrise. I will cast Elsewhere Flask next. It has a higher mana cost, but it has the same cost free card advantage as the Star and Sphere. Finally, I cast the Spellbombs. The Spellbombs are not ideal when comboing off, but if you have the extra mana you should use the Spellbombs to draw some extra cards in the process.

Remember to be conservative with your mana when going off. If you have four mana left in your pool including a Lotus Bloom, then it's incorrect to cast a Preordain or Ponder before you cast your Second Sunrise. However, if you have five mana, then it becomes correct to cast the Preordain or Ponder because it may find you a copy of Conjurer's Bauble, Chromatic Star, or Chromatic Sphere, that may end up netting your four or five cards in the process of going off. Remembering small complexities like this one is very important if you want to ensure that there's no chance of fizzling during the combo.

The ordering of when to sacrifice which artifacts and activate your Ghost Quarter can be complex at times. You want to sacrifice your Conjurer's Bauble first to put the desired card back into your library and increase your chances of drawing it. Then you want to use your Ghost Quarter to shuffle that card back into your library and thin your deck of lands. You can go ahead and draw a ton of cards with the rest of your artifacts once your deck has been thinned of basics and had a live card shuffled back in. 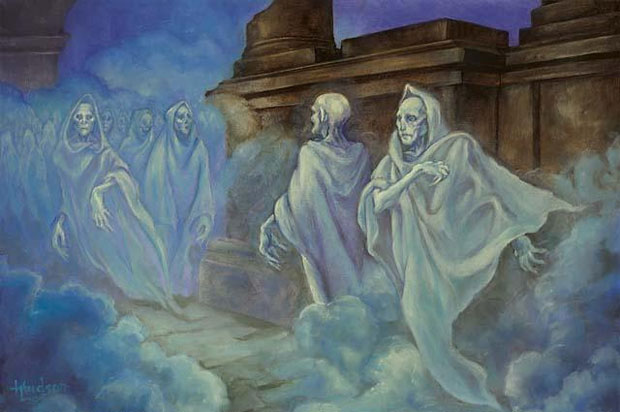 Don't play a land on the turn you're going off unless it's a Ghost Quarter. Ghost Quarter will net you a ton of mana and thin your deck so you draw more artifacts and action spells while going off. The deck plays few enough land that it's very unlikely to whiff when you draw eight to ten cards. You should be able to use your mana carefully and go off without a single extra mana from the Island you might play until you find the Ghost Quarter.

Sometimes you need to loop your Pyrite Spellbomb without two Lotus Blooms. To do this you need to 1) add one blue mana with an Island; 2) destroy it with Ghost Quarter; 3) sacrifice Lotus Bloom for three white mana; 4) cast Second Sunrise using

; and 5) use Conjurer's Bauble to return the Second Sunrise. You can perform this loop infinitely and create unlimited white mana, then begin sacrificing the Lotus Bloom for red mana and looping Pyrite Spellbomb for the kill.

Did you get all that? Again, I recommend playing some solitaire games with the deck and coming back to reread the above advice periodically. It's a lot of information to absorb in a single sitting.

I put together my Second Sunrise Eggs deck, and I've been goldfishing it every time I get a chance. I'm going to provide an example solitaire game in an effort to make all this information digestible. 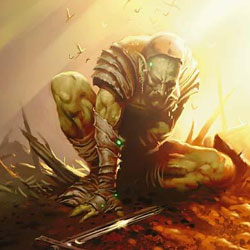 On turn one I play an Island and cast Chromatic Sphere.

On turn three I draw a Ghost Quarter and see that I have the tools to go off. Here's what happens next:

From there, I cast all the artifacts I've got, destroy all my lands with Ghost Quarters, draw into a few more artifacts and cast them, and eventually reset again with Second Sunrise. The Reclaim in my hand ensures that I'll have another Second Sunrise to continue looping and I'm home free to draw my entire deck. Once I've draw my entire deck I use the Lotus Blooms to make red and white mana, I sacrifice my Pyrite Spellbomb to deal my opponent 2 points of damage, and cast my Second Sunrise. I use Conjurer's Bauble to put the Second Sunrise back into my hand and loop the Spellbomb with the Lotus Blooms.

Eggs is one of the most interesting decks in the history of the game. Modern is a format where Eggs will, in all likelihood, be around forever. Learning how to play this deck can give you a profound appreciation for the complexities that are possible within the game of Magic. I hope you all enjoyed this in-depth look at Modern New York Eggs.